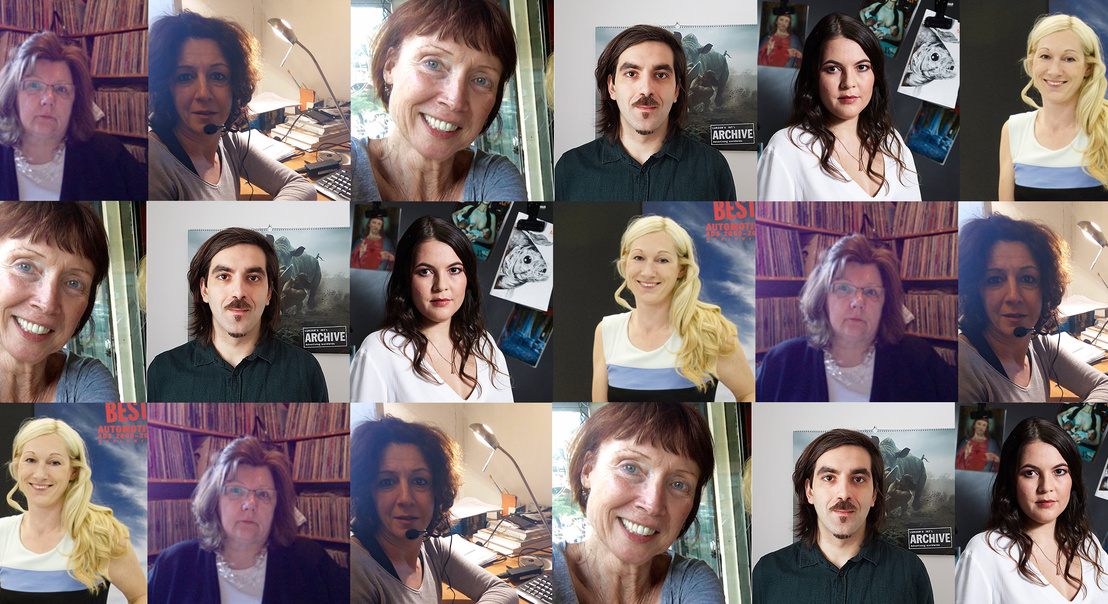 Advertising sales are an important, if not economically speaking the most important factor in a magazine's success and longevity. This is why I should like to introduce to you our ad sales colleagues who manage to acquire lots of pages of paid ads to each issue. (I've been told once that in the U.S magazine readers are willing to accept an advertising to an editorial ratio of 60:40, while European readers start to get uneasy at a 40:60 ratio. (If you don't believe me just have a look at the issues of the US edition of, let's say, Vanity Fair and you could easily arrive at page 110 before even seeing the magazine's table of contents.)

Most of Lürzer's Archive advertisers are photographers and plenty of them have reaped the rewards of placing their ads in a magazine that goes directly to the heart of their target audience, i.e. ad creatives. This has not always been the case. Having been with the magazine for 30 years now I remember a time, in the late 80s, when the number of paid ads in Archive was a very meager one indeed. To improve this financially unsatisfactory situation Walter Lürzer made a deal with the Handelsblatt Group, whose main title, The Handelsblatt is published in Düsseldorf, and a leading German language business newspaper. They provided us with a special team for ad sales – with the result that we sold even fewer ads than before. Our circulation – which must have been around 30,000 in those days – just wouldn't attract enough advertisers, we were told.

Walter Lürzer then took Archive out of the Handelsblatt Group and decided to follow the example of American Showcase, then our co-publisher in the US,  and started targeting ad photographers and advertising-related clients. This worked out very well and ever since then we were able to feature paid ad pages that were attractive in and of themselves as they are the work of photographers trying to impress our readers – their main target audience – with their skills.

Today we have six sales reps, who work internationally and provide the financial basis for our magazine.

The one who has been with us longest is our sales rep in the US, Claudia Coffman, who had already worked in this position for American Showcase (a company Walter Lürzer was later able to buy and merge with Archive.) Claudia hails from the Midwest originally, and is based in Jersey City, New Jersey, "voted as one of the best places to live by many polls!" Claudia adds. "I love the arts of any kind: photography, illustration, design, music - you name it," and she runs almost daily!

Kate Brown is our representative in the UK and the second longest with Archive, she used to work for Timscris, our former distributor of Archive in the UK. To meet up with her when I'm in London is always a highlight of these trips. "I have a very interesting, varied position, which enables me to be involved in all aspects of our business within the UK," she says.  "Since the late 90s, I have enjoyed the varied interactions that go with talking to clients, agencies, photographers, illustrators and designers, not forgetting the subscribers and distributors. Visiting agencies, awards ceremonies, having nice lunches with very interesting creative people, watching people grow in their careers - it cannot be all bad. After all this time, I am still proud to see the books everywhere, I really love helping new photographers launch campaigns in Lürzer's Archive, and grow their business. The challenge is to move with the times, enjoy collaborations with the best brands and moving our own brand onward and upwards. When I am not at work, I enjoy anything involving Interior design, DIY, holidays in the sun, great restaurants, reading, and a good football match." The latter she gracefully refrains from talking to me about when I visit.

Another of out team who does more than just sell ads for our magazine and special issues is Carina Wicke, who is based in Frankfurt am Main (where Lürzer's Archive was founded in 1984 and had its headquarters till the early 00s.) "I was hired from Walter Lürzer in 2001 when I moved to Frankfurt to study law," she says. "After some coaching from Walter himself, my love for the ad business evolved and I started at Luerzer´s Archive as advertising sales manager with additional responsibilities within the Luerzer Trust (legal affairs and facility management). My favorite project is 200 Best Ad Photographers and 200 Best Digital Artists series, and the latter also brought about our sponsorship of the first CGI Award in Germany in 2016 and I am working on this award in 2017 as well. I love photography, exhibitions, snow dogs (I had the most beautiful dog for 11 years, I would bring her to all the fairs and exhibitions we were represented at and she was the most popular member of the Luerzer´s Archive team in Frankfurt." Her personal goal for the next 14 month is to get a pilot's license." In the interest of the company, I think she should be barred from doing that.

Originally hailing from Franconia, near Nuremberg, Sheila King has been with us since 2003 after working at various ad agencies in Germany. She is in charge of national (i.e. German) and international ad sales. She lives with her husband and two young daughters in Rome, near Ostia and can be frequently seen on horseback galloping along the beach at breath-taking speed. Another perilous hobby, which, of course, we frown upon.

Diana Dragomir is another power woman in our sales team who juggles several jobs while also being a wife and mother to a lovely 6-year old daughter. I had the great pleasure of spending time with them when I visited Bucharest a few years ago for the amazing launch party for our first book in the 200 Best Digital Artists series.  But let me give you her own words: "Last week was my 16th anniversary working for Lürzer's. It has been a beautiful diverse journey from the delivery woman, local distributor, database person, partner in a Romanian business, international sales representative, customer care manager and international distribution. I love 200 Best Packaging Design book in particular because it was my first project on sales that I witnessed from its very beginning. Also, it is a wonderful special  and it sold out completely. I have a side business in the Romanian market which involves mobile and new technology development for advertising agencies. The projects developed by my dev studio have won more 150 creativity awards in the last five years. As for my free time, I love running, reading and chatting with people. I love the internationality of Archive and the fact that we can be at the pulse of the creative advertising world."

Diana gets help from Alexandru Dina who, he told me is originally from "Ramnicu Valcea better known worldwide as 'Hackerville,' a city close to the Carpathian Mountains. He came to Bucharest to study Business Administration and stayed after finishing school. He started working as a sales and customer care assistant for Lürzer's Archive almost two years ago. "Now I'm assisting international ad sales, subscription sales, customer care and the distribution. I love it as it was my dream to work in sales and somehow in the advertising world and this job is a combination of both. In my free time, I produce music, is something I started seven years ago." 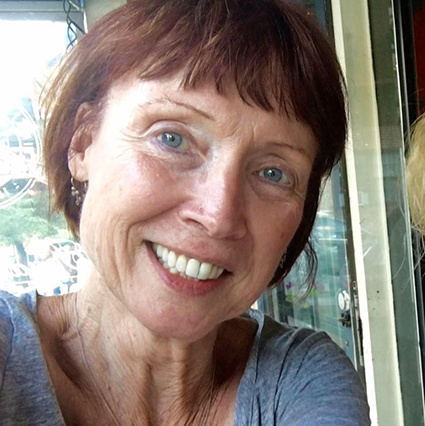 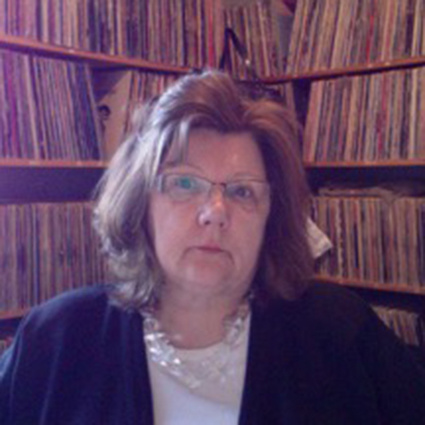 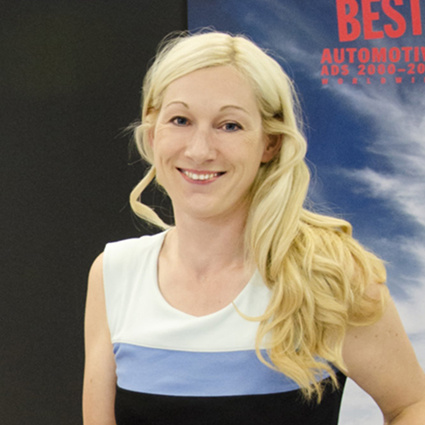 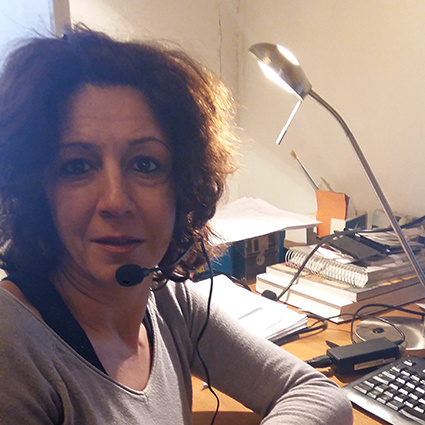 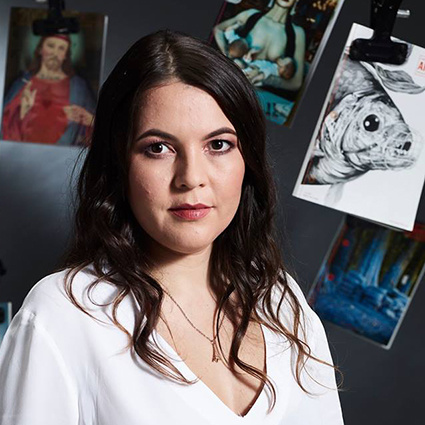 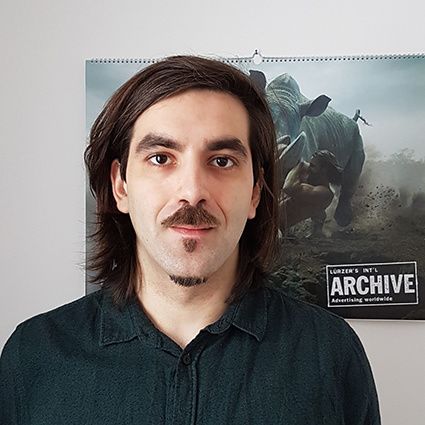