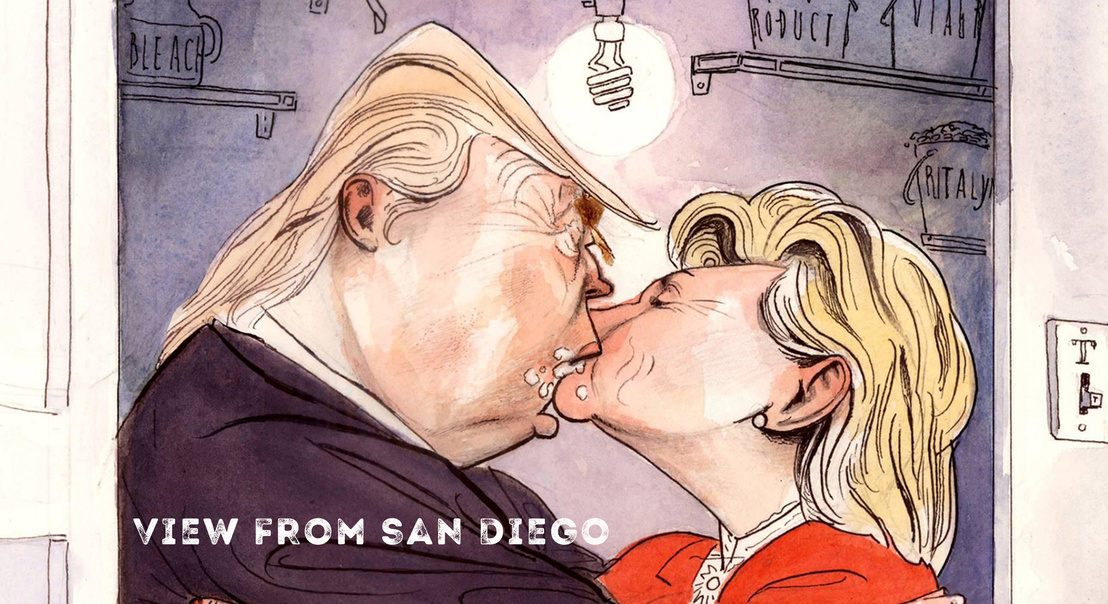 Trump demands it: Anne Telford on US illustrator/caricaturist Steve Brodner

A self-described news junkie, Steve Brodner might rue that predilection after his marathon drawing sessions during the recent presidential election cycle. Brodner is most likely seeing images of The Donald’s tiny hands and ridiculous comb over in his sleep after endless iterations drawn live during the debates and the Republican National Convention for the Village Voice.

He has covered more than 40 stories as a graphic journalist including high profile court cases, profiles of Bob Dole, George W. Bush, climbing Mt. Fuji and nine political conventions. In 2004 Fantagraphics Books published a monograph of 350 of his favorite illustrations, cartoons, and other works on paper, under the timely title Freedom Fries.

The New York illustrator, journalist and educator fuels his work with social activism, taking to the streets to march in protest, as well as using his pen as a potent tool for change. His insightful and sometimes frightening views into the belly of the American political beast frequently appear in the pages of Rolling Stone, the New Yorker, and The Nation, among many others.

Brodner has used his trenchant, often savage wit, and superb talent for caricature to skewer and draw attention to the faces and personalities of those in power, through several administrations. The financial woes, sexual peccadilloes and online hijinks of our elected officials offer endless subject matter to this observant witness to history. The 2016 presidential election resulted in a perfect storm for a caricaturist who honed his skills on skewering Bush and his cabinet. The first week alone provided a staggering array of artistic interpretation.

In light of this drastic political shift from America’s first black president to white supremacists in the White House, I asked Steve to discuss creating controversial images during the Trump years. Here are his comments.

Steve, can you quantify the number of illustrations you produced during the election? (I’m sure your output alone must have set some kind of record!)

It was, yeah, a very busy year for me. If we include all the work I did during debates and conventions I would say the work would total between 200–300 pieces.

On the cusp of the first Obama administration, I asked you how you his new administration might be perceived. After eight years, how would you answer?

The Obama years brought the most bifurcated assessment of any president I can remember. A very centrist man became a savior or devil depending what Kool-Aid you drank. Neither was true, I think. All politics is compromised and mitigated simply because we must live in a country with groups who perceive themselves to be very unlike each other. And all must have a say.

Problematically, the country is practically owned by a ruling class. This has resulted in a controlled media that benefits from keeping the country fairly confused.

Do you foresee more politically focused editorial work being commissioned as a response to the new administration, or less?

Oh yes for sure.  Trump demands it. It is true now and it will only increase. The first few days have given us a chilling presentment of what might come.

Do you think we will see the erosion of the First Amendment and a crackdown on freedom of the press?

We are seeing it now: The confusion over “fake news”, what that means in an age of phony news sites, like Breitbart. And his followers can't tell the difference. They are made allergic to information and evidence.

We are in trouble simply by doing nothing about inequality and climate, issues seldom mentioned in the presidential campaign. Now we have an emergency situation of an unwell man driving the massive engines of the US government toward increasing these and many more problems we needed badly to fix.

We need to not only be loud and strong, but to be this in new and different ways. Ways commensurate with the gravity of this threat.

How can artists fight back?

Make your art.  Get it out in every possible venue. Join with other artists to start projects.  Beat the drum as loudly as you can very day.

In a previous article discussing political caricature, you equated the Bush administration to terrorists taking over and doing everything possible to destroy the country. Now that Trump is president and has already taken action to repeal the ACA, continue with the DAPL and Keystone pipelines, overturn Roe v. Wade, etc., what extremes can the caricatures reach? (Or will art directors need to meet some censorship memo in the not too distant future?)

I really don’t see illustration needing to go to extremes now. They just need to contextualize and re-contextualize that which we all know. It is in the artist's ability to create powerful juxtapositions so that new understandings and new reflections of passion can arise.  Edel Rodriguez’s flat paint renderings of Trump for Time, Victor Juhasz’s ferocious paintings for Rolling Stone and Barry Blitt’s for The New Yorker have been by far the most effective. The directness of the work has made all the difference.

When historians look back at this last surreal election cycle, what images do you think will stand the test of time?

That is impossible to say. Just make more. That's all. Face front and create. Feel the pain of your people and your planet; let that voice move through you.

Going forward I will be talking with more illustrators and photographers about the work they are creating to push back against the Trump regime. Stay tuned!

To see more of his award-winning work, visit stevebrodner.com. 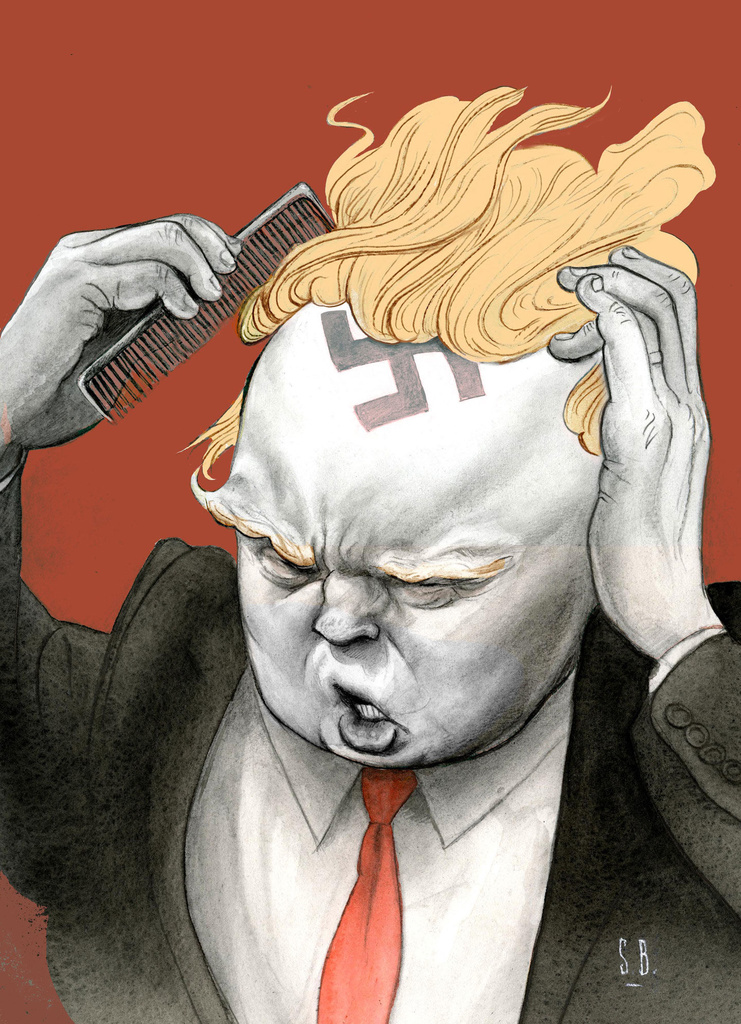 "The Combover" for The Nation. 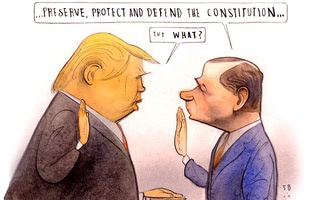 "The Oath for The New Republic." 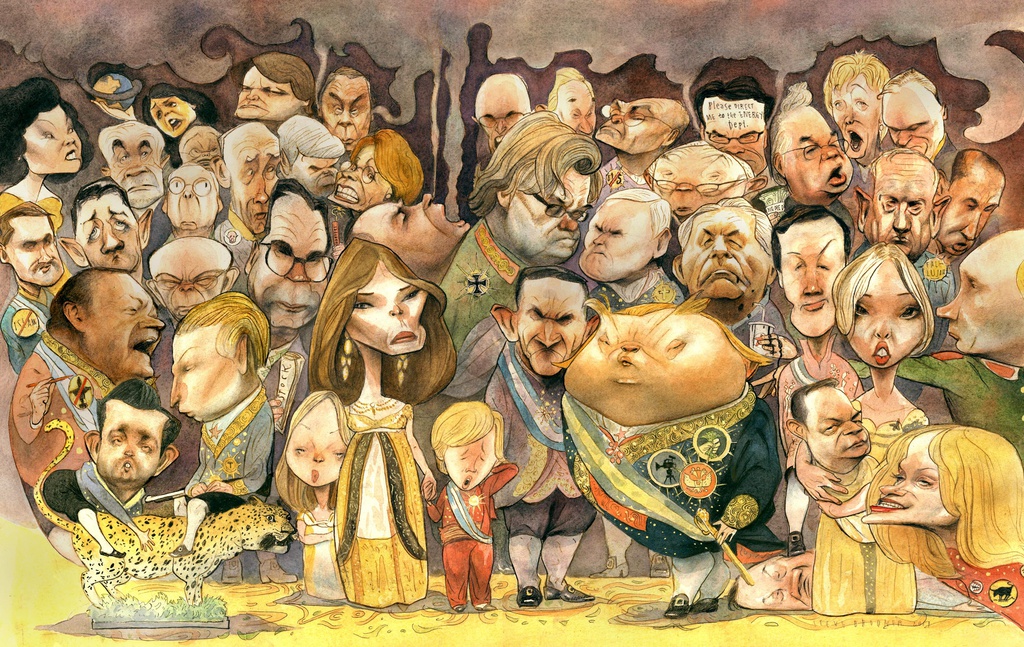 "The Court of Donald I" for the Los Angeles Times. 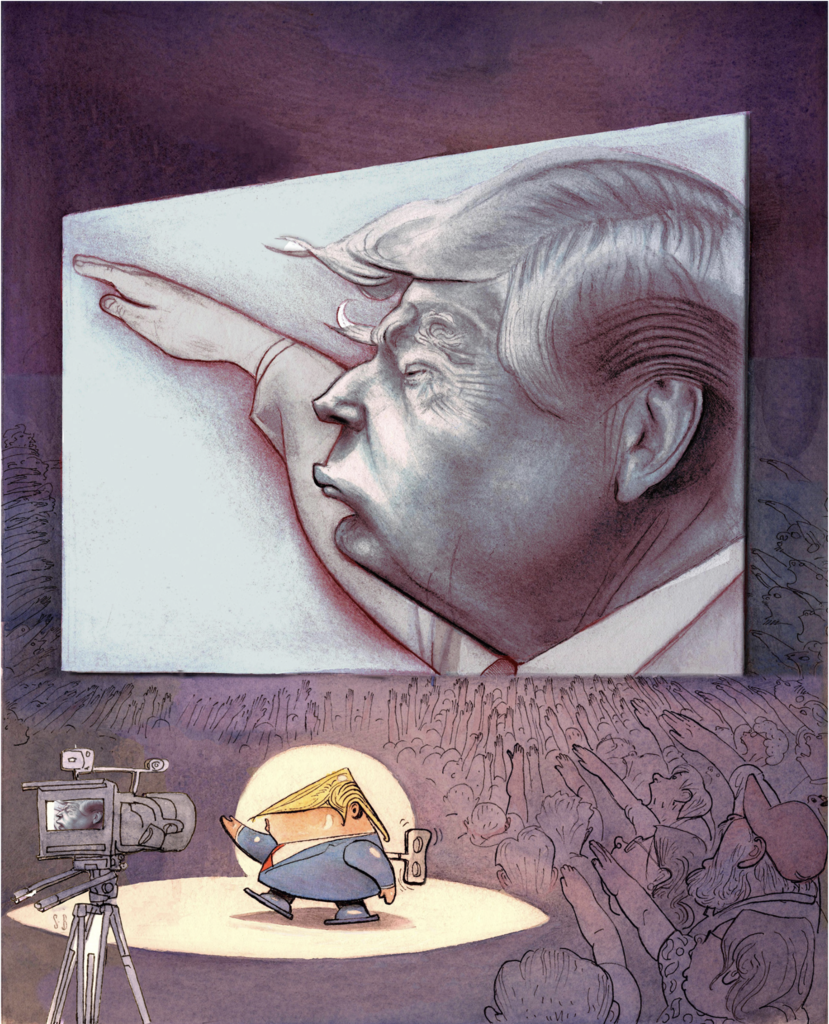 "Donald Trump and the joys of toy fascism" for The Village Voice. 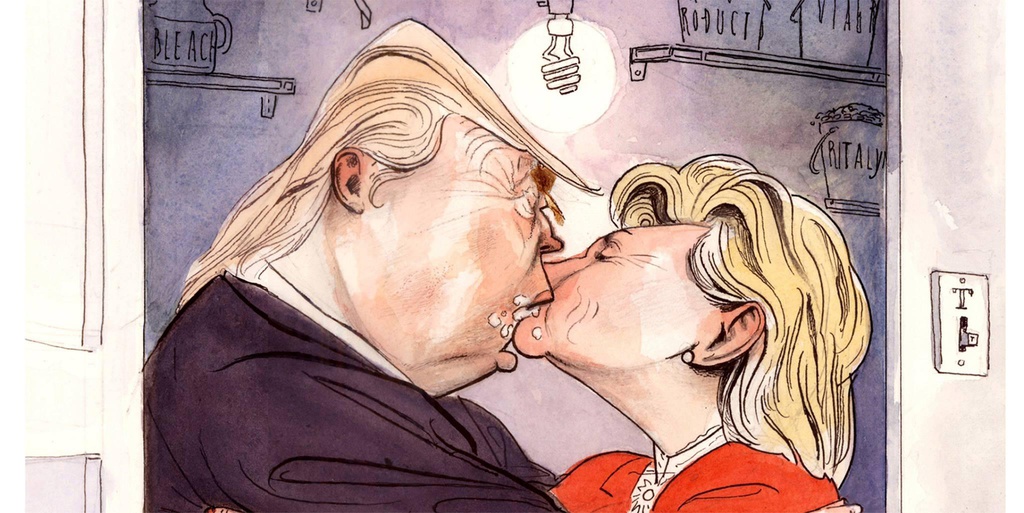 "Unknown shot of Hillary at the Trump wedding" for the Los Angeles Times. 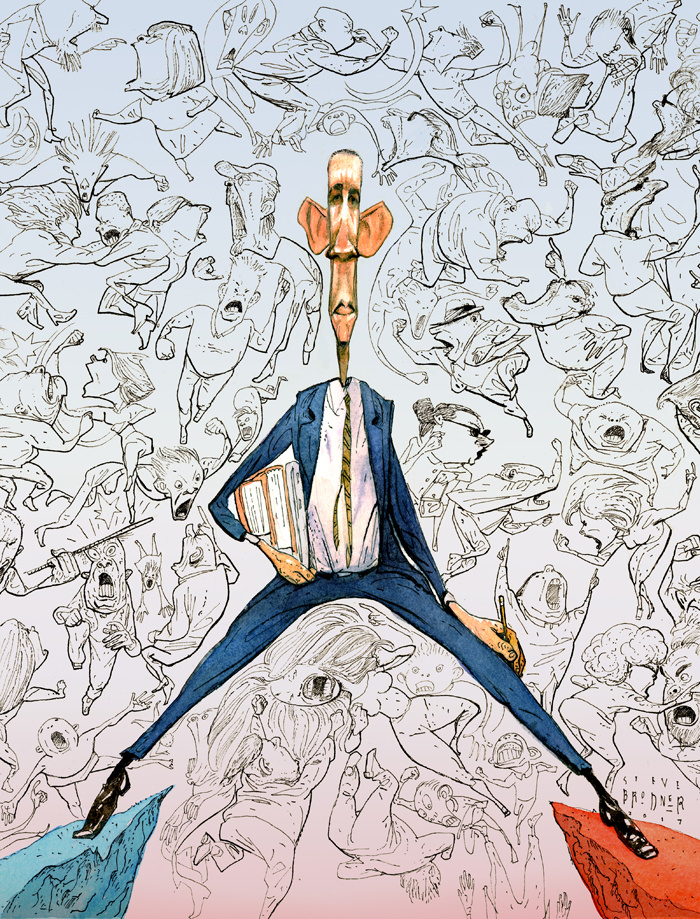 "Obama at the Breach" for The Nation.