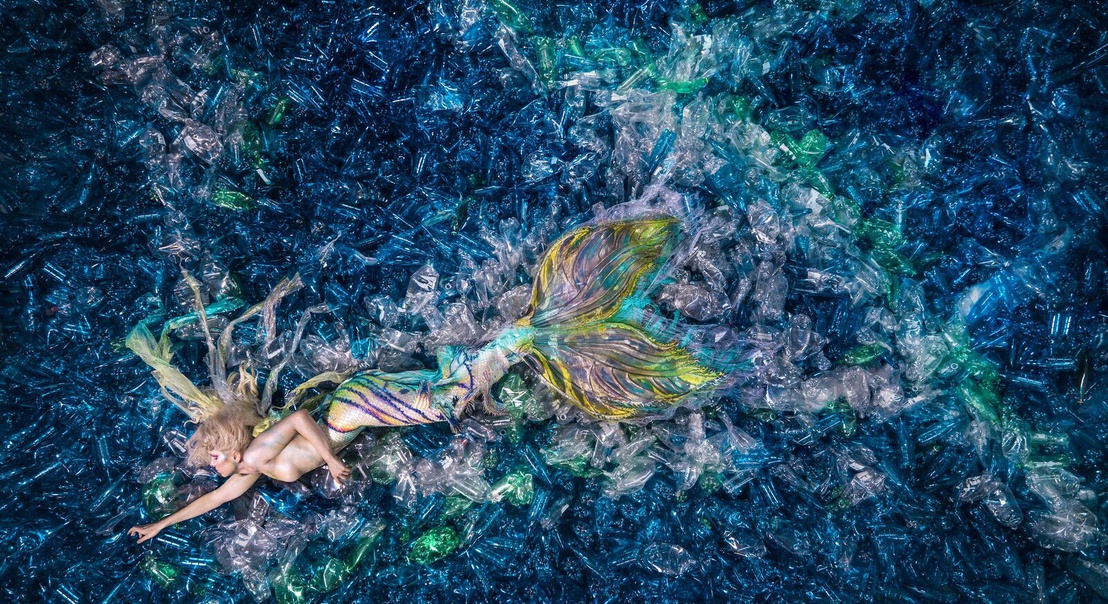 A magical creature surrounded by plastic garbage: Canadian photographer Benjamin Von Wong – whose work was also recently featured in our 200 Best Photographers 2016/17 book – created a series of amazing environmental images he hopes will heighten awareness on plastic pollution in our oceans.

The project arose when Von Wong found out that 50% of all the plastic we use is only used once before being thrown away and then taking approximately 450 years to degrade. Alarmed by the fact that by the year 2050 there will be more plastic rubbish than fish in the sea, the artist decided to take action, pondering on how to turn an ordinary, ugly and rather boring topic into something extravagant.

„One of my greatest strengths as an artist is that I am often too naive to realize how crazy my ideas are“ says Von Wong „I dive into them head-first, rallying volunteers around a single cause. Thanks to the help of people who are often complete strangers at the beginning of my projects, what starts off as a small idea blossoms into a full blown production.“ 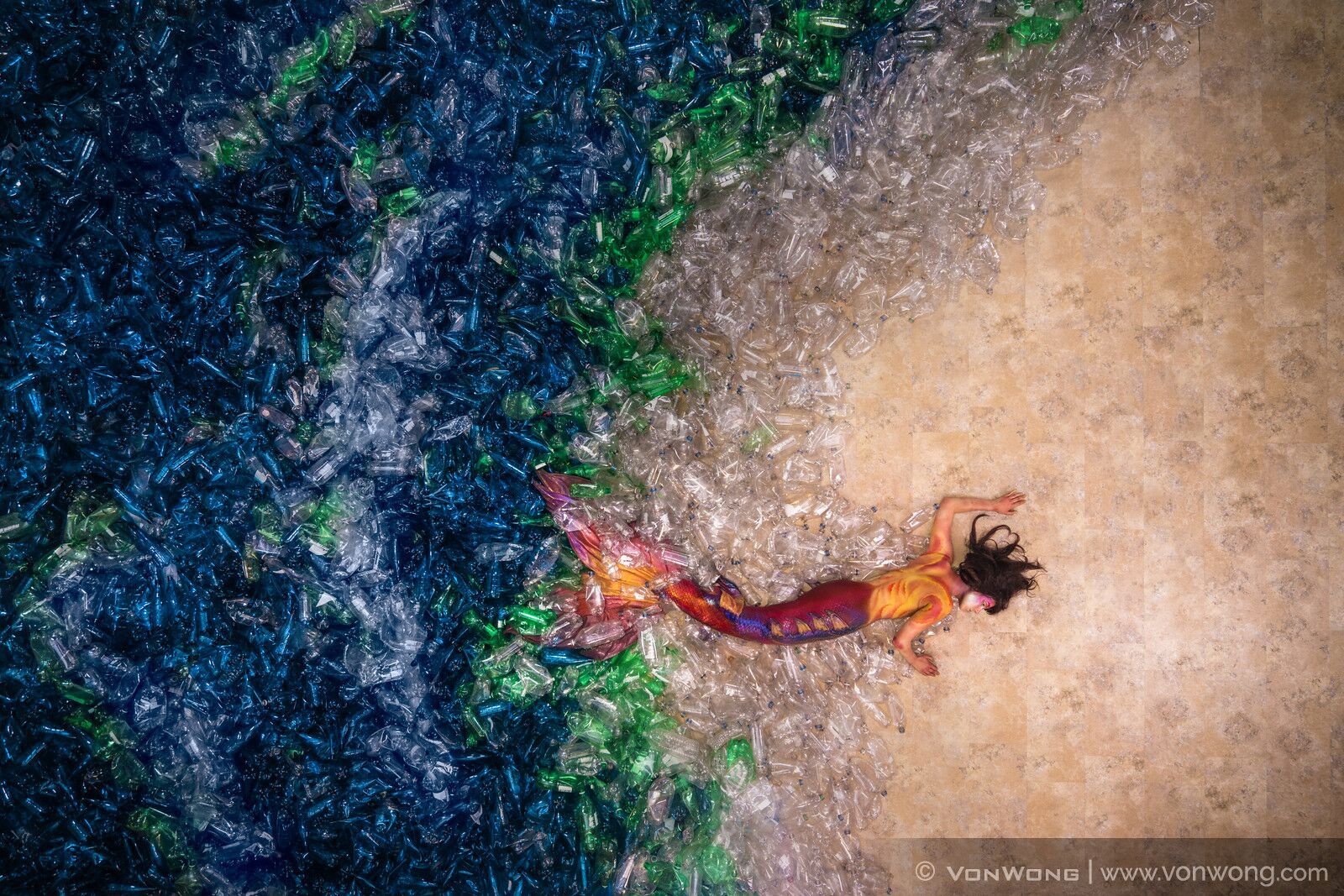 And this is how the project evolved: First of all, 10,000 plastic bottles were borrowed from waste management centre Tomra. Over the course of a few days, a small army of volunteers – friends and family of Von Wong along with complete strangers who had heard about the project on social media platforms – came to help de-label, un-cap and clean those 10,000 bottles in a huge warehouse. A lot of experimentation was needed to organise the white, green and blue bottles in unique and effective patterns that represented an ocean landscape.

For the mermaid’s outfit, Von Wong chose costume designer Cynthia, who created a unique silicone tail specifically for this project. Professional makeup and hair stylist Tamsen teamed up with airbrush artist Jean-Michel to make sure model Clara had the proper iridescence and shine. Finally, the camera was suspended by a professional using a system of pulleys and plywood and controlled via iPad, while being connected to a 52″ TV.

The result was a series of visually stunning photographs, which set the unearthly beauty of the mermaid in high contrast to the pile of garbage around her. With the images, Von Wong ultimately wants to spread his message #MermaidsHatePlastic, encouraging people to take the pledge to re-use plastic. His petition has already gained more than 13,000 supporters, which gives reason to hope that creativity paired with action can really do its bit to make the world a better place. 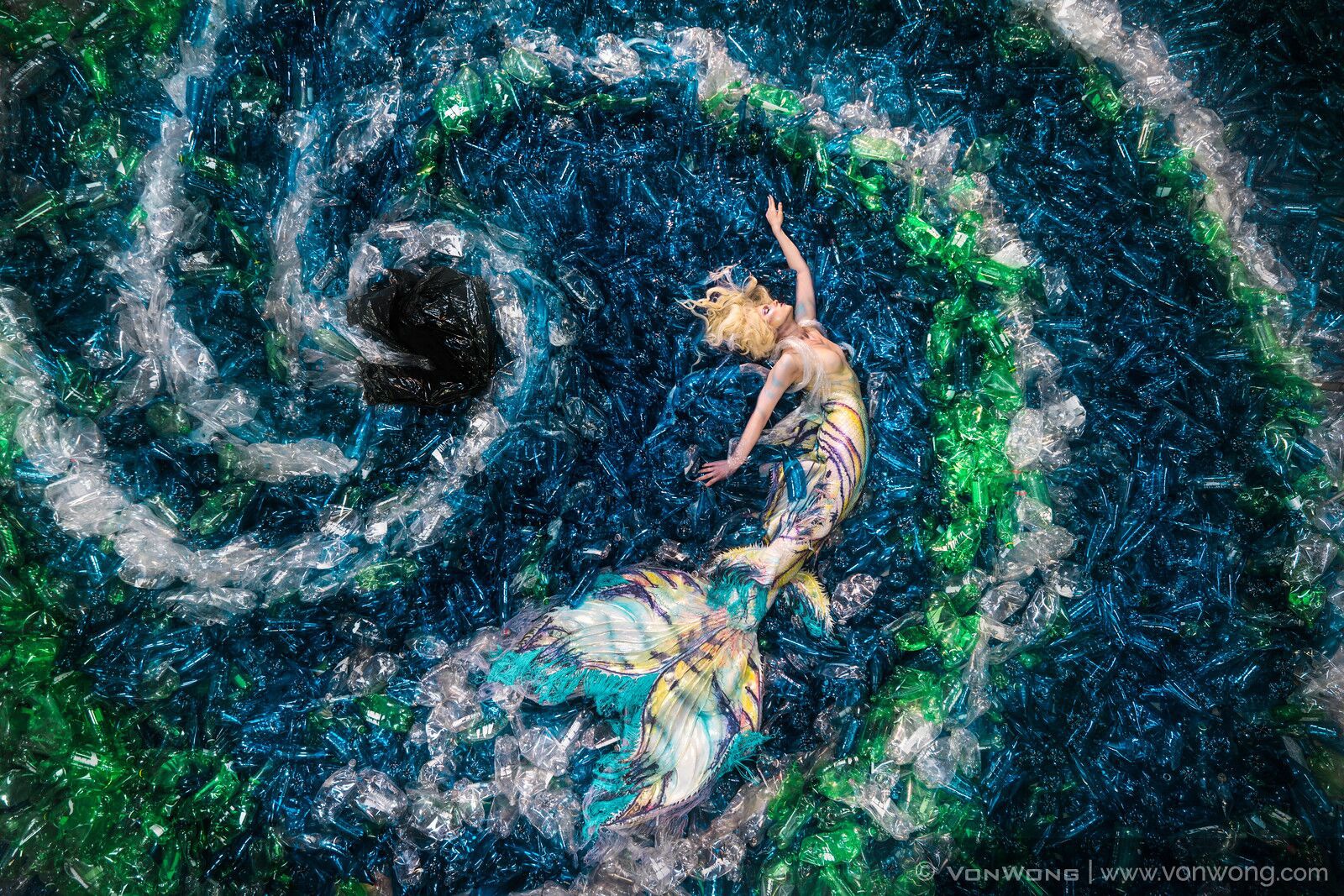 Watch this video for a peak behind the scenes: 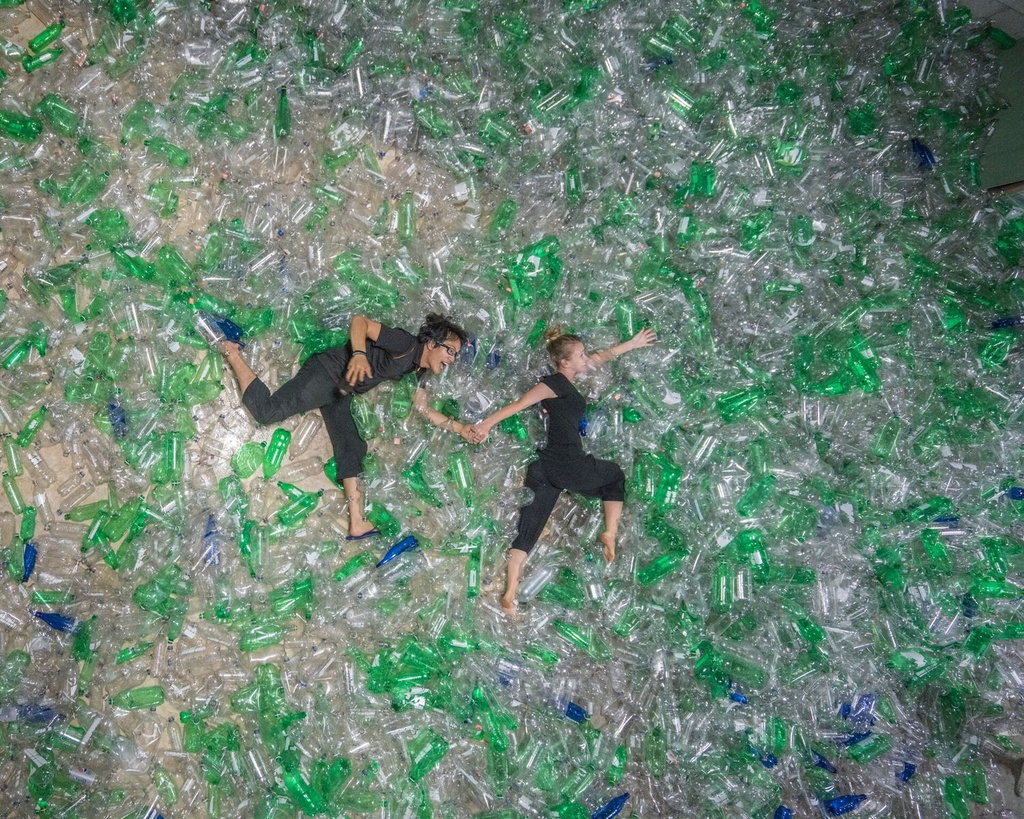 Von Wong and his girlfriend running through 20% of the 10,000 bottles collected for this project 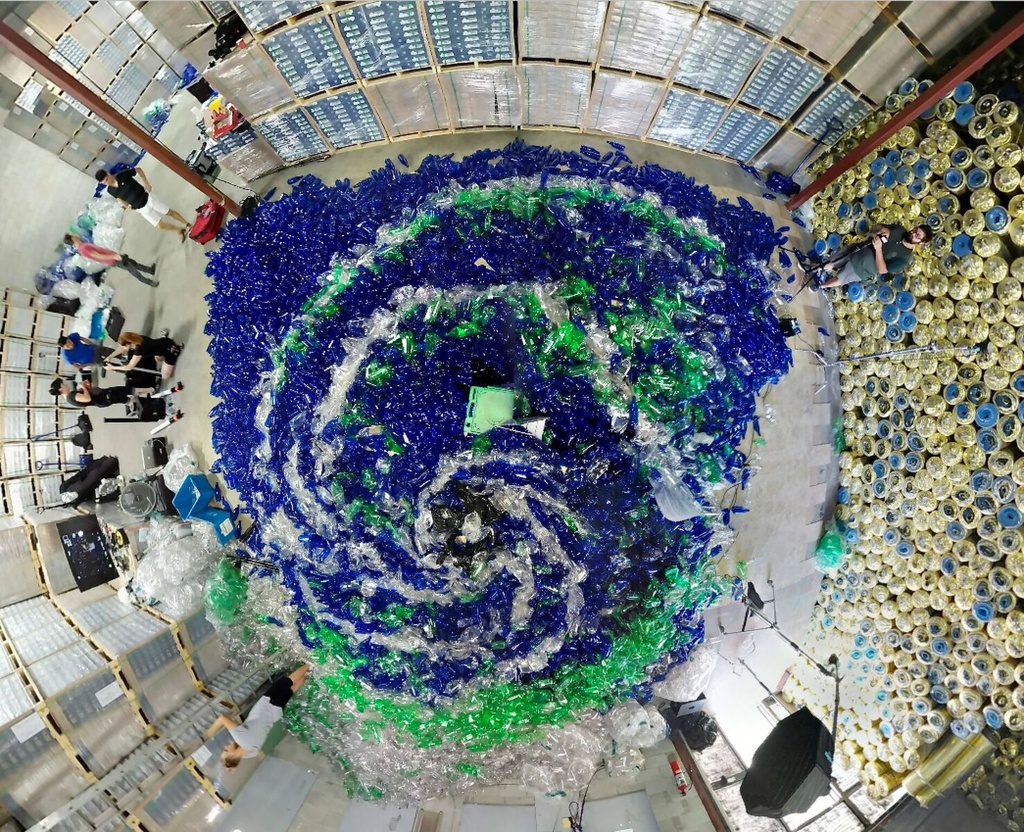 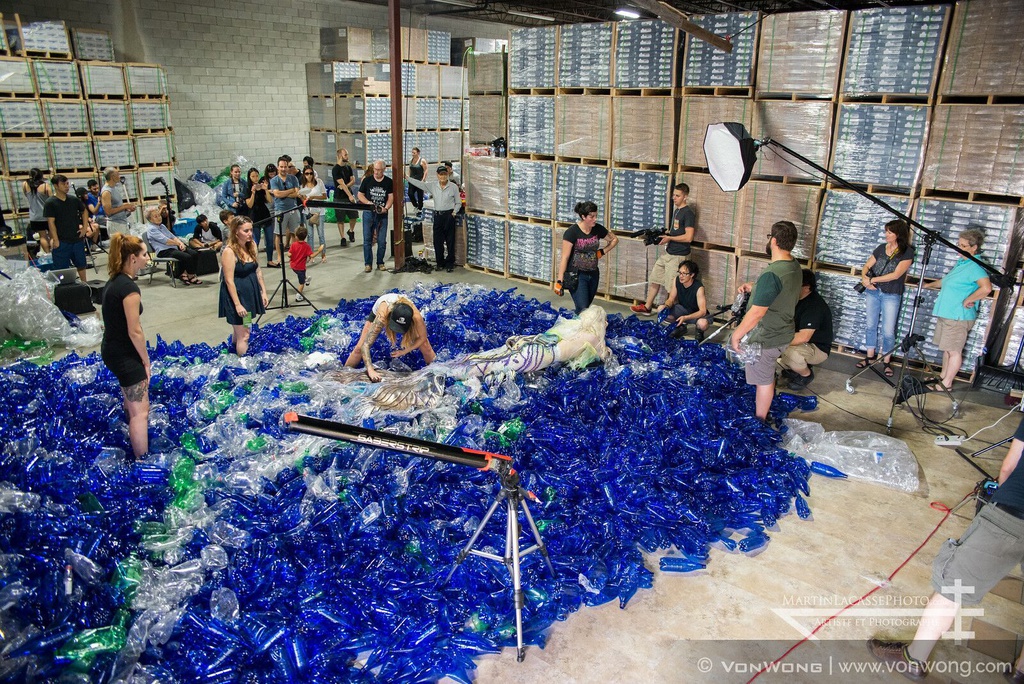 Between each shot, hair, bodypaint and mermaid tail had to be tweaked to perfection. 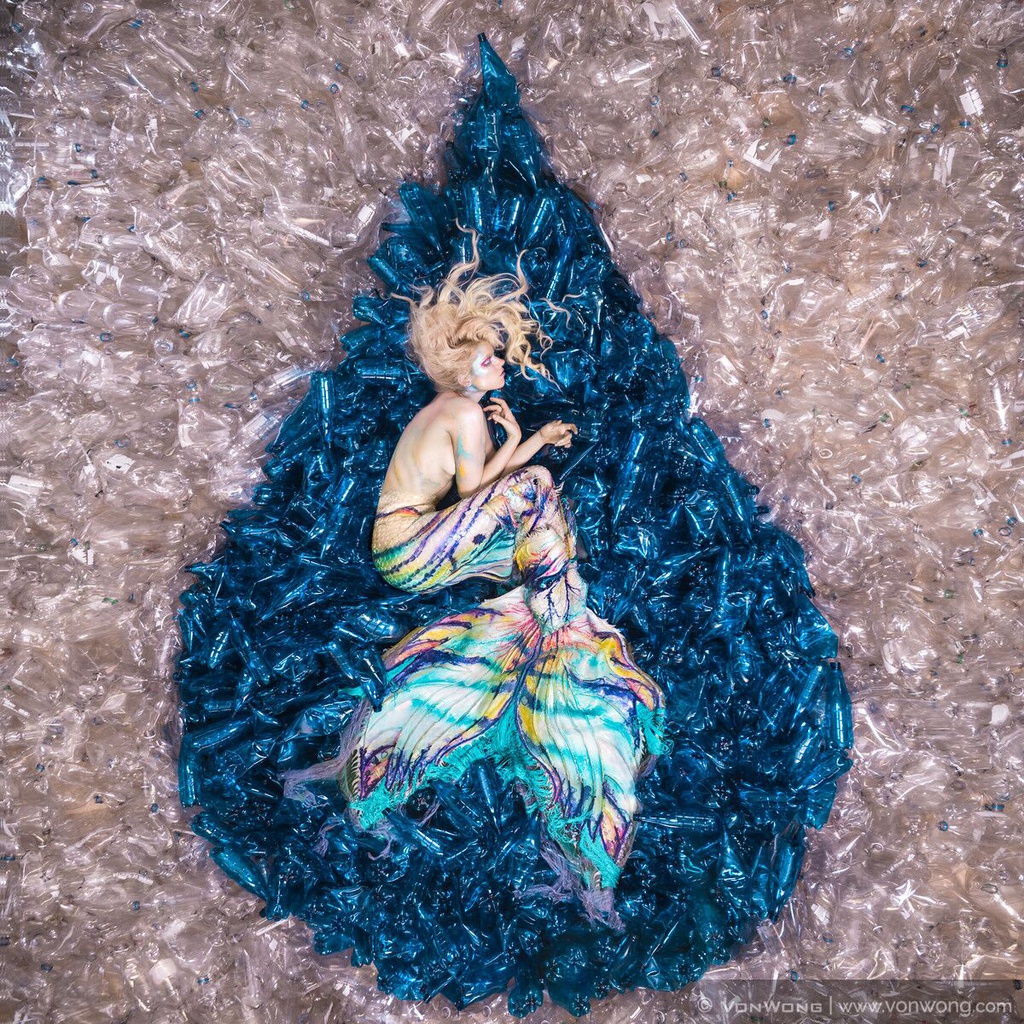 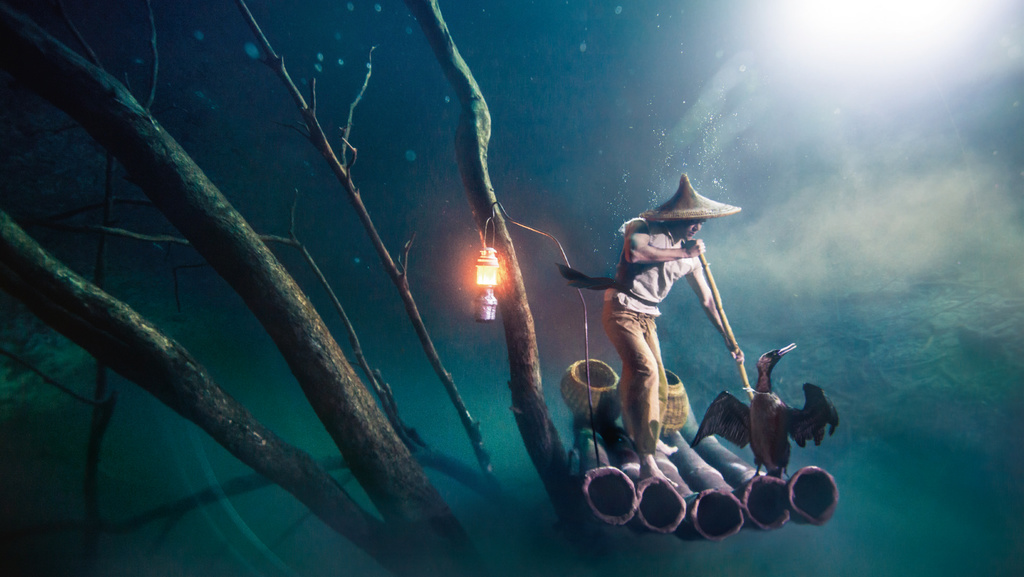 Von Wong's work for the ad campaign for Ballantine’s Whiskey was featured in our 200 Best Ad Photographers 2016/17 book.