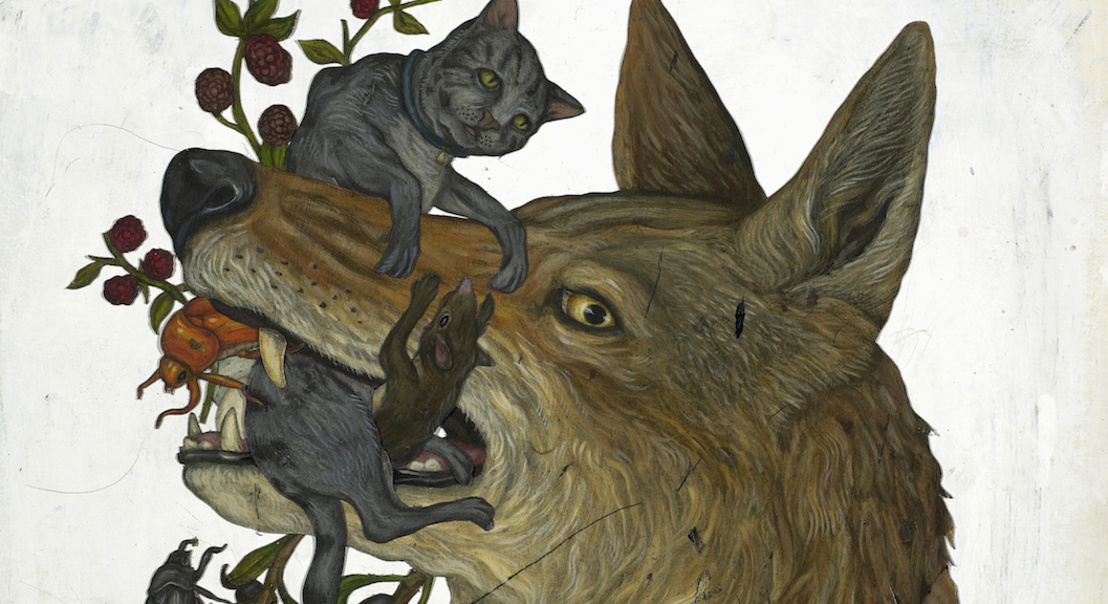 Artists have always looked to nature for inspiration. It is the most readily available—and uncomplaining—model, and for many peoples at different times in evolution, nature was something to be worshiped, revered, held in awe as the bringer of life and also its destroyer. Nature began as paradise before a stern god threw woman, and man, out of it. Ever since we have been trying to find that paradisical place of peace and abundance. Rousseau created an idealized, romanticized jungle, Gauguin escaped to one, shunning the conventions of Parisian society and losing himself in Samoa. In the 21st century, artists must capture what remains of old-growth forests, of mountain-fed rivers, of arctic ice floes, for the demands of an expanding global population are ever encroaching on the last bastions of untrammeled nature.

At a time when nature is under assault from the needs—and deeds—of man, it is more vital than ever that the connection we share with the earth, the air, and the sea, be made manifest in the form of art. Showing the wonders of our planet and her myriad inhabitants, artists like Cathie Bleck, Joel Nakamura, Joseph Daniel Fiedler, and Jason Holley, celebrate and interpret the relationship between animals and humans, and the interrelationships between all species.

Cathie Bleck’s powerful paintings using clay pigments and lacquered inks on panel, present us with metaphysical questions. Underneath the beauty of her fluid line is the reality of life and the eventuality of death. She makes nature a deeply compelling environment. Her twisting, intertwined figures demand our attention, and draw our interest to the dilemma of our time: our wanton despoliation of nature in our quest to strip her of her wealth, our insatiable thirst for oil and the terrible price nature pays for it (read any number of Exxon accidents) and our disassociation from the natural world. As her primary medium, she uses kaolin clay, from and of the earth, to make her art, which creates an indelible link between her subjects and her creative expression. “The Cro-Magnons scratched pictures into rock or bone to tell their stories and thus I was drawn to utilize this natural clay (formed at the bottom of a lake) to relay visual narratives that relate to both our past and present human conditions,” Bleck explains.

Bleck’s nature is not prettified; her forests are dark and twisty, with overarching trees and verdant undergrowth. She grew up on a tree farm, and understands the cycle of nature, the random viciousness of storms, and beasts, yet her paintings are hopeful. In them the intelligence, and vibrancy of the animal world is portrayed with sensitivity and insight. The kinship we bear one another is given a poignant, and heartfelt voice.

Joseph Daniel Fiedler, or Scaryjoey as many know him, fills sketchbooks with paintings of lettuce leaves and trees, salamanders, and turtles. He is a keen observer of the animals that thrive in the woods surrounding the rural home in Northern California he calls Pinewoods Studio, including the silver foxes that live in the forest behind. From a lowly mud puppy to a grizzly with a sore tooth, Fiedler captures the spirit of the animal with respect and affectionate humor.

On social media, he posts photos of bear scat found near his home and discusses storms and animal sightings with great joy and interest. Nature surrounds him and he delights in its vagaries and surprises. He has lived for long stretches in isolated places where there is not much distraction from the nature that envelops them, such as Taos, NM, of which he wrote on his blog, “It was my very own world filled with blue skies, blue tailed skinks, Mountain Bluebirds, Lazuli Buntings, Taos Blue [I even knew a guy named Blue!], Kiva Fireplaces, awesome red or green chile sauces and piñon smoke.” These observations from life have informed his work for commercial clients as well, with his digitally enhanced hand-drawn images appearing in the Los Angeles Times, Flaunt and New Orleans Magazine, among others.

Jason Holley deconstructs nature in his collage paintings, layering images like leaves on a forest floor. Common elements like bones, skulls and botanical drawings are the underpinnings of canvases that often feature beautifully rendered birds. Holley’s skill at capturing our avian friends rivals that of Audubon. His wife is an avid birder, which has only intensified his interest in them as a subject.

His work has appeared in Outside magazine, the New York Times Sunday Magazine, the New Republic, Texas Monthly, and has graced book and album covers. Holley’s studio is filled with taxidermy animals that look down from the walls with a range of permanent and preternatural expressions of rapt attention. Stacks of small paintings, elements from cut-apart and reassembled canvases, and bleached bones draw the eye. Outside leafy trees provide shade, inside a strange museum of anthropological bits and pieces combine to form a pleasing environment. In a separate room, musical instruments are set up as if a band had just stood up to take a break between sets. Nature, music, and art, form a rich triumvirate of inspiration for Holley who imbues his beasts, birds, and insects, with a gravitas that is belied by their colorful rendering.

Joel Nakamura has long painted dragons and other imaginary creatures in his painstakingly detailed and fanciful way. Drawn from Japanese mythology and Native American myth, his creatures are terrifying and humorous, and they can have very human expressions. His visual vocabulary—what he refers to as “visual mythology”— is drawn from tribal art and inspired by his studies of Joseph Campbell’s writings on mythology heroes. Nakamura’s miniatures painted on tin panels have the look and feel of surreal icons.

In Tako Niwa (Octopus Garden), he presented a body of work focused on the underwater world—the octopus in particular. Of course Nakamura’s octopi are cute and compelling, with Keane-like eyes—even when they are twining their tentacles around strange dog-like creatures. What is mesmerizing, though, are the jellyfish in the background. Faintly lined, purple, blue and sea green, they drift like ghosts behind the manga-cute and neon-colored main characters. In a commercial application of the series, his unique characters have found a home in a California sushi restaurant where they undulate across dining tables.

All of these artists have taken various migrations to arrive at where they now reside. Cathie grew up on a tree farm in Ohio, and now lives in the suburbs of Cleveland. Scary Joey resides in Grass Valley, near Nevada City, Northern California’s best-preserved Gold Rush town, after stints in Taos, NM, Detroit, MI, Oakland, and Nevada City. Jason Holley was born in Dallas, TX and grew up in South Pasadena; he lives in the Sierra Madre, “Village of the Foothills”, perched on the slope of Mt. Wilson, east of Pasadena, CA, where at night he hears coyotes greeting the dusk. Joel Nakamura grew up in Pasadena and lives on the outskirts of Santa Fe, NM, where in winter he occasionally has to hire a snowplow to clear the road leading to his home and studio. Wherever they live these artists look to nature for their subject matter, and in many cases their inspiration, and in so doing, they present us with evidence of a world well worth celebrating, and sustaining.

To see more work from these artists: 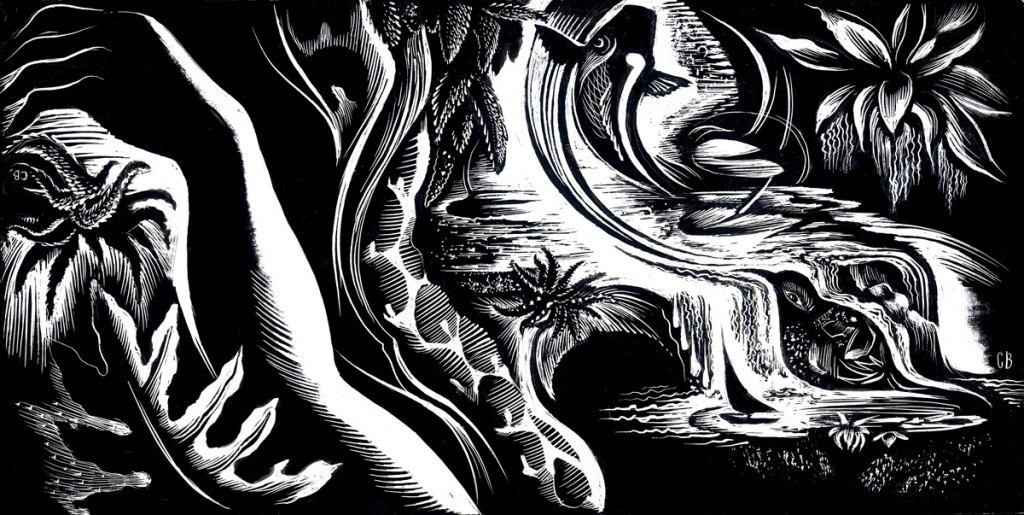 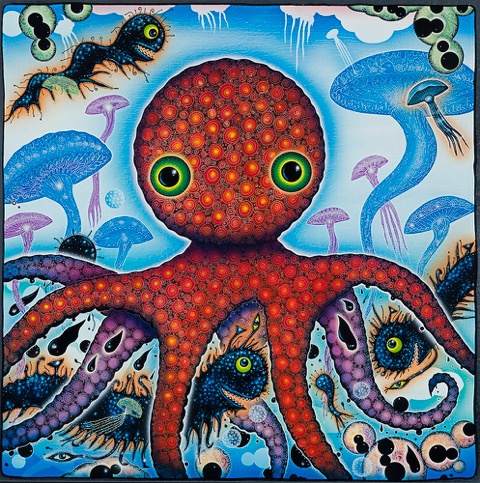 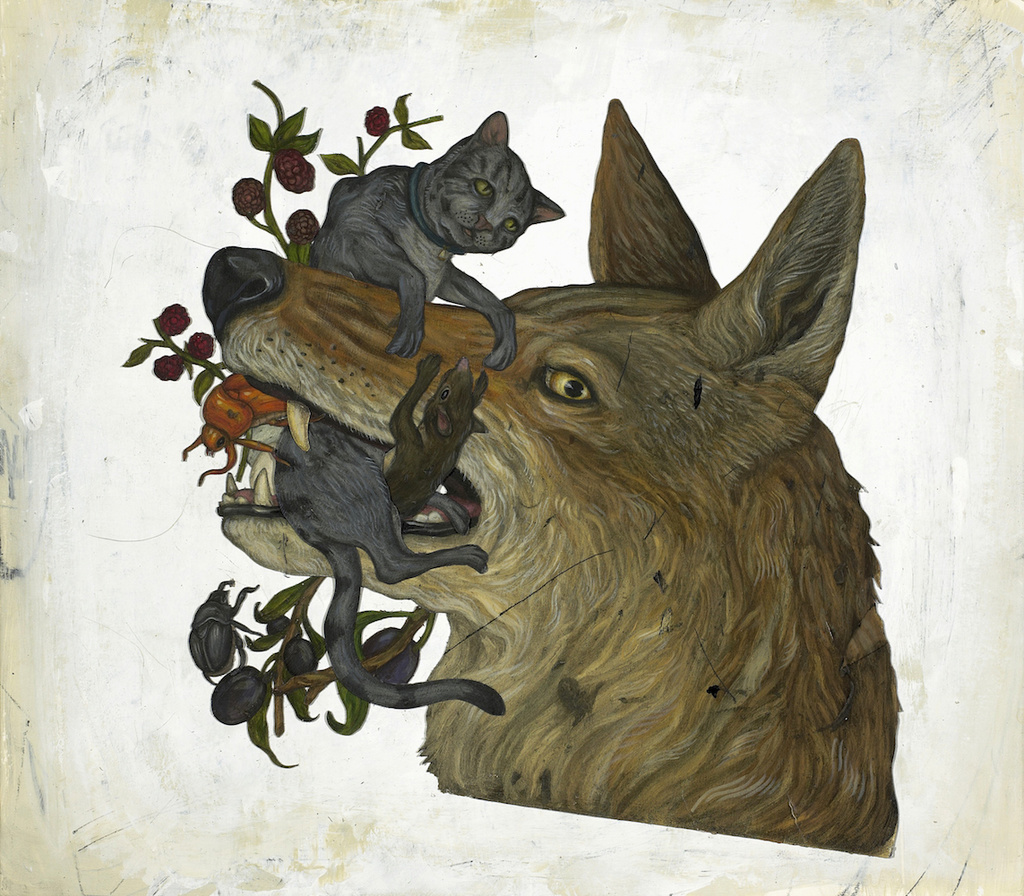 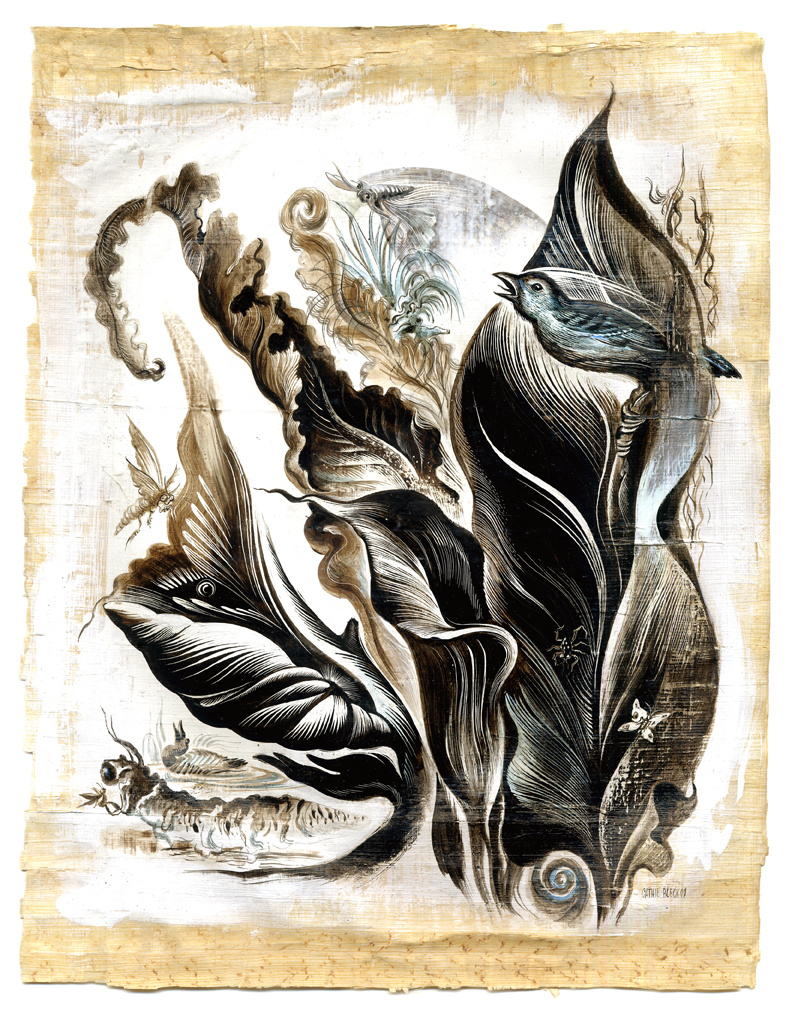 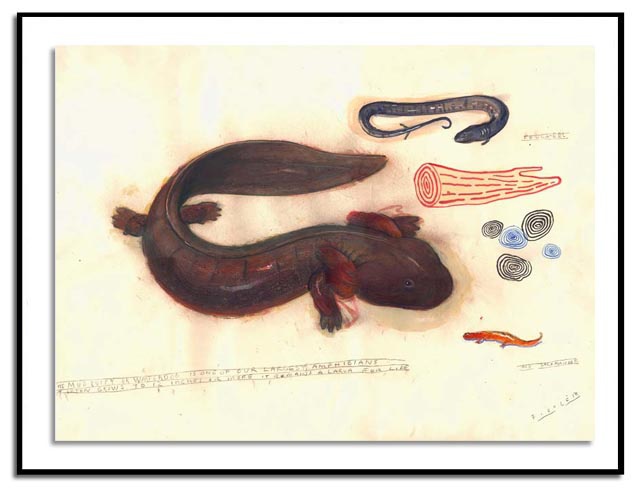 Joseph Daniel Fiedler, “I still make things with my real hands. Mud Puppy from my expanded sketchbooks”, 23 x30, acrylic and pencil on paper. 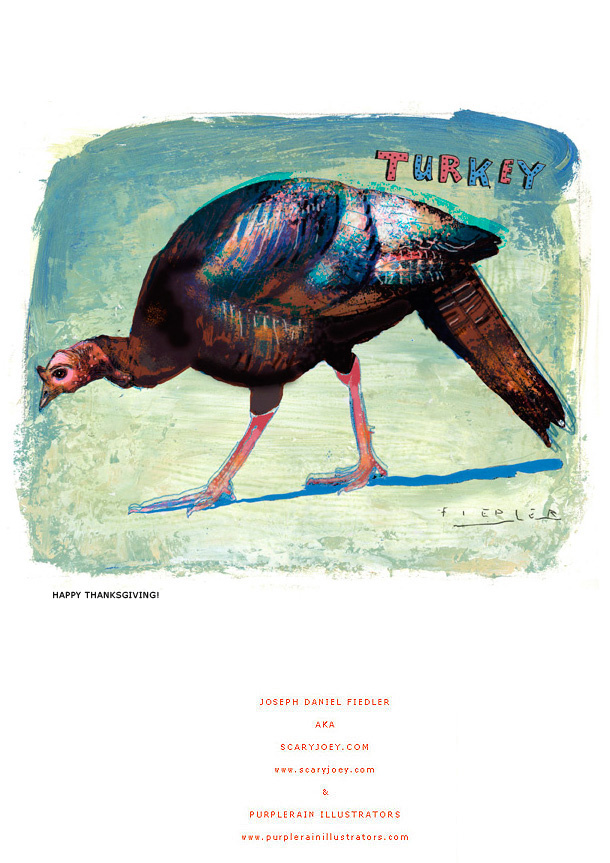 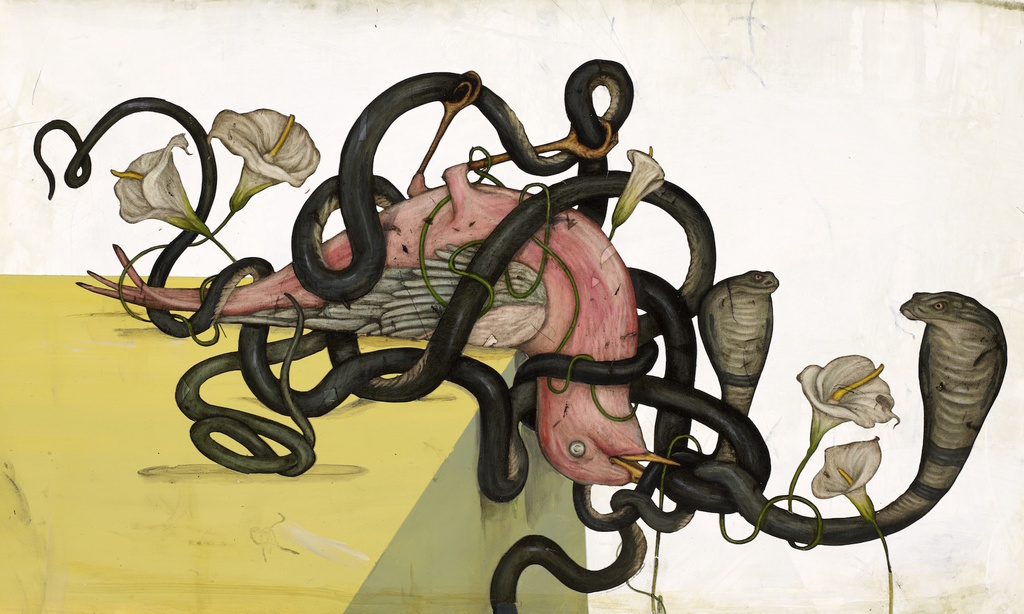 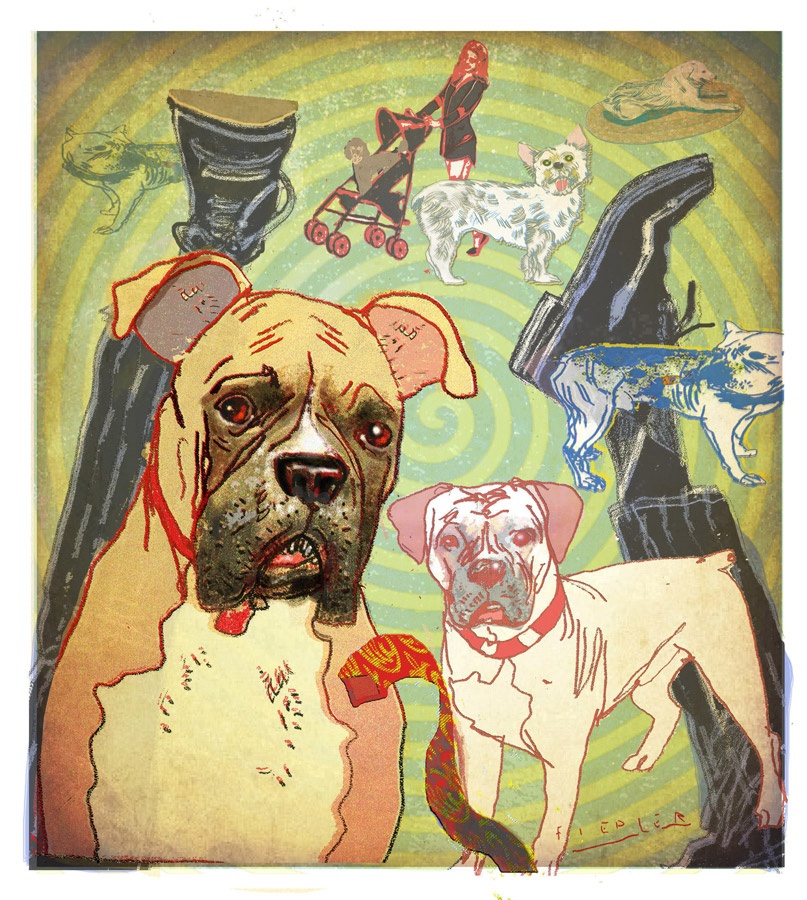 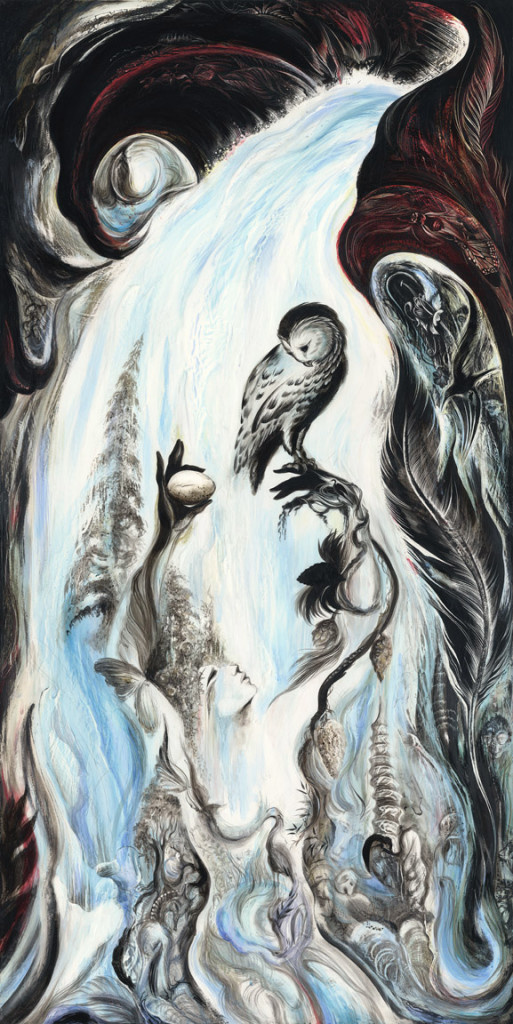 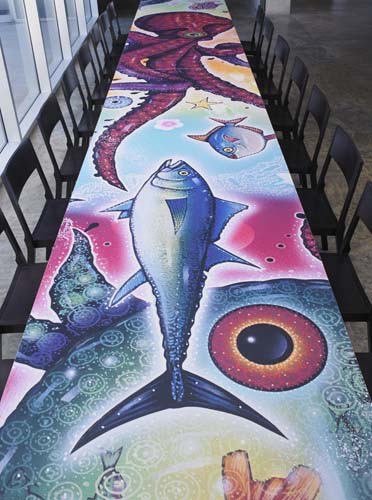 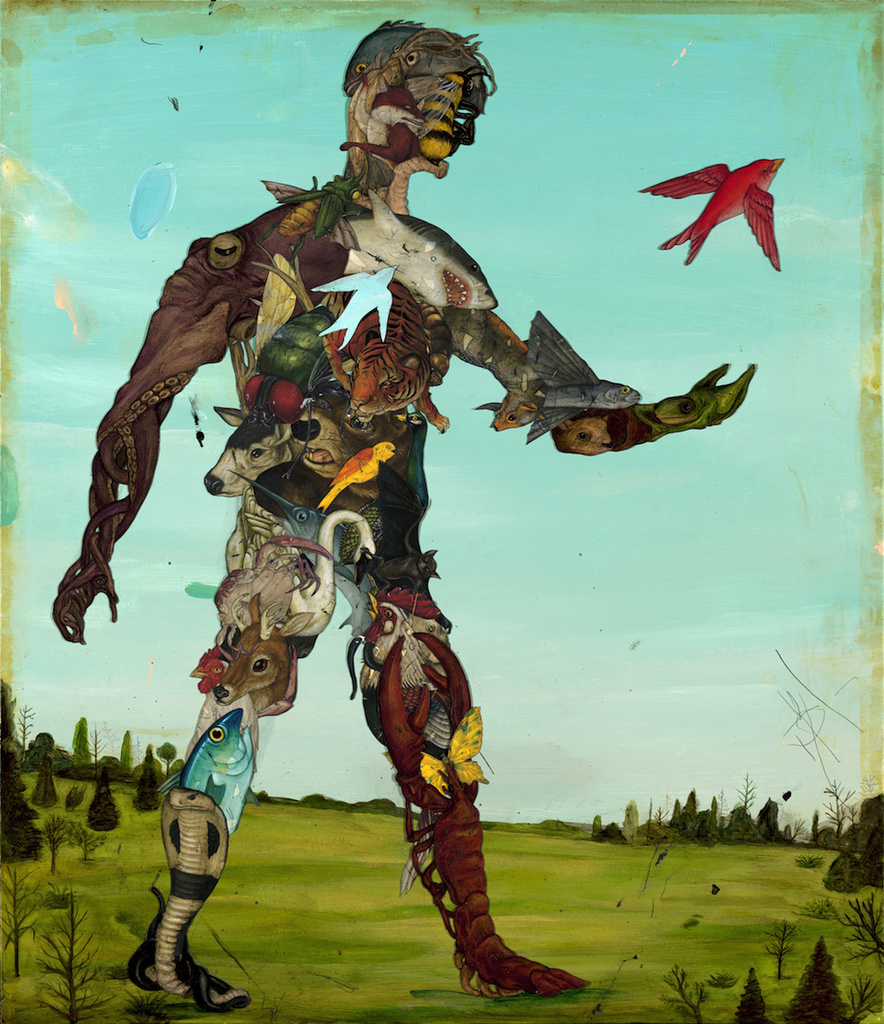