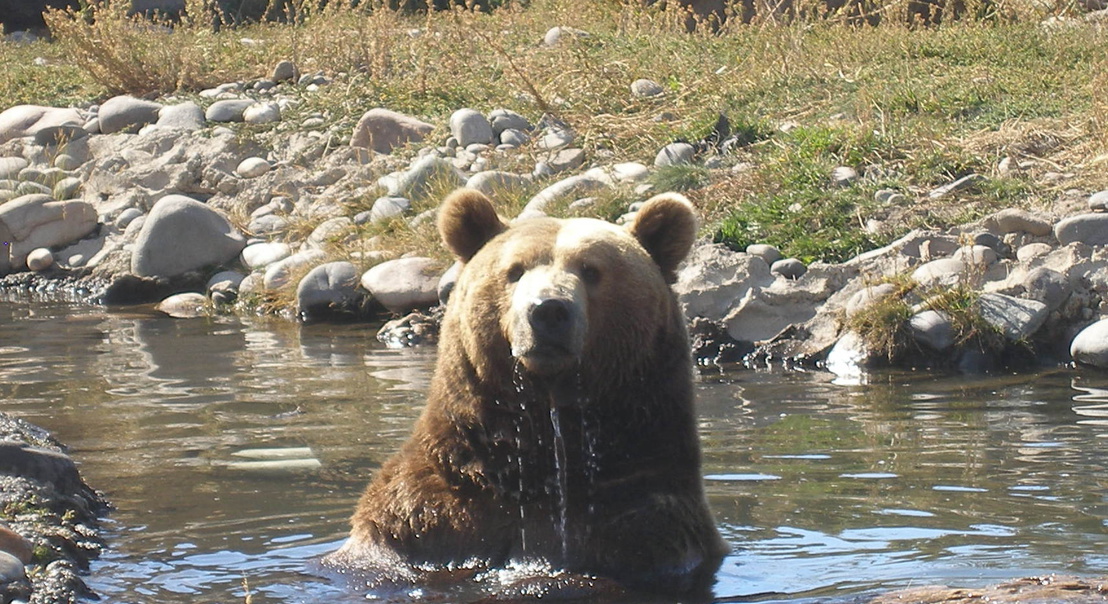 I’ve been fascinated by bears my entire life. Growing up we camped in nearly every National Park and regional campground in California and the American West. I have seen bears far and near and even when frightened by their proximity I have been thrilled at the sight of a black bear running through a pine forest, puffs of dust rising up into the sunlight as it disappeared down a trail, a flash of furry rump and tail, and then silence. The silence accorded the king of all creatures in the woods.

My family laughs about my desire to pet a bear and live through the experience. If I were to be reincarnated I would want to come back as a female grizzly bear. So imagine my horror at the Trump administration’s roll back of protections for endangered species that includes shooting hibernating bears in their dens in Alaska. As American politics descends into a level of craziness unknown since the Nixon administration, and of an unprecedented threat to our National Parks, my thoughts increasingly turn to nature and how to best protect our wild places and creatures. Lets resolve to speak out for the land and for the animals whose voices are silent, yet enduring.

Light filtered down through the pine trees, fine dust flew up in tiny puffs through the needles dotting the ground. Blue jays shrieked and chattered. It was late afternoon, and approaching the dinner hour.

The air was cooler, and ashes drifted by occasionally. You could hear the sound of campers near by, families eating, talking; children playing, fires crackling, men chopping wood or running water from the campground's small silver faucets. The water made a metallic sound as it hit the tin pans and cups, a dialogue between the natural and the man-made.

I don't remember what we ate, sitting at the hard wooden picnic table, something easy to prepare in a small trailer kitchen. But for dessert, Mom had a bag of black licorice, barber pole shaped pieces, the rope kind, pungent black candy twisted into a post-modern statement. The licorice ropes were hard, and their organic flavor would flood into your mouth and turn your lips black. Quite a cool candy for a kid, and apparently one of deep attachment for my mother who never ate candy otherwise: She chewed bubble gum and liked licorice. She also painted her nails red. She was a tough cookie.

So we ate dinner and washed up afterwards, the lantern casting a narrow circle of light. The forest sounds more noticeable after nightfall, listening always, for a bear. We would have sat by the fire, my parents on lawn chairs and me on a log. Dad wore corduroy shirts in brown and in blue, with T-shirts underneath. Blue jeans slung low on his hips, rolled up at the cuffs. Lace-up brown leather work boots Camping, we went to bed early, because it was cold and we'd run out of things to talk about and there was no light to read. I'd get tired out from playing Indian all day in the woods, walking ever so quietly, hoping to sneak up on squirrels and to spy on the other campers. The Coleman lantern buzzed and hissed with pulsating light, throwing a small circle out into the velvety darkness.

We slept in our 1960’s white Ford station wagon—my mom and dad on a foam mattress in the back of the wagon and me in the front seat. My mother put a curtain up for privacy. Late one night, with the insects creaking and the moon palely shinning, I woke up to hear my parents talking. Dad was whispering to my mom, "June, that's the biggest goddamn bear I've ever seen." Sure that death was only a paw stroke away, I began to sob into my pillow. Imagining horrors untold, I finally screwed up my courage and peeked through the curtain.

My mother was staring out the back window. Dad leapt through the doorway of the car, yelling and waving his arms. In his pajamas, in the forest, there he was making noise to scare the bear away. Out of the corner of my fear-narrowed eyes I saw a large shuffling shape move out of sight. Dad went to check on the camp. The bear had battered the lid of the metal ice chest, no doubt smelling the bacon nestled inside with the eggs and the cheese and the milk.

In the morning, we assessed the damage. Our nocturnal visitor had ripped into a knapsack left on the table. Inside there had been a box of Wheaties cereal, white sugar, maybe some other stuff, and—my mother's treasured bag of licorice. The bear had eaten my mother's licorice and, my dad discovered, to his great distress, the box of Wheaties, his all-time favorite breakfast cereal. I hadn't lost a thing. The bear had come, and all I'd witnessed had been a blur of brown standing briefly and then undulating away into the forest, and the night.

[b& w photo caption] Photos taken at Yellowstone National Park in the 1940s by my father Douglas Telford. 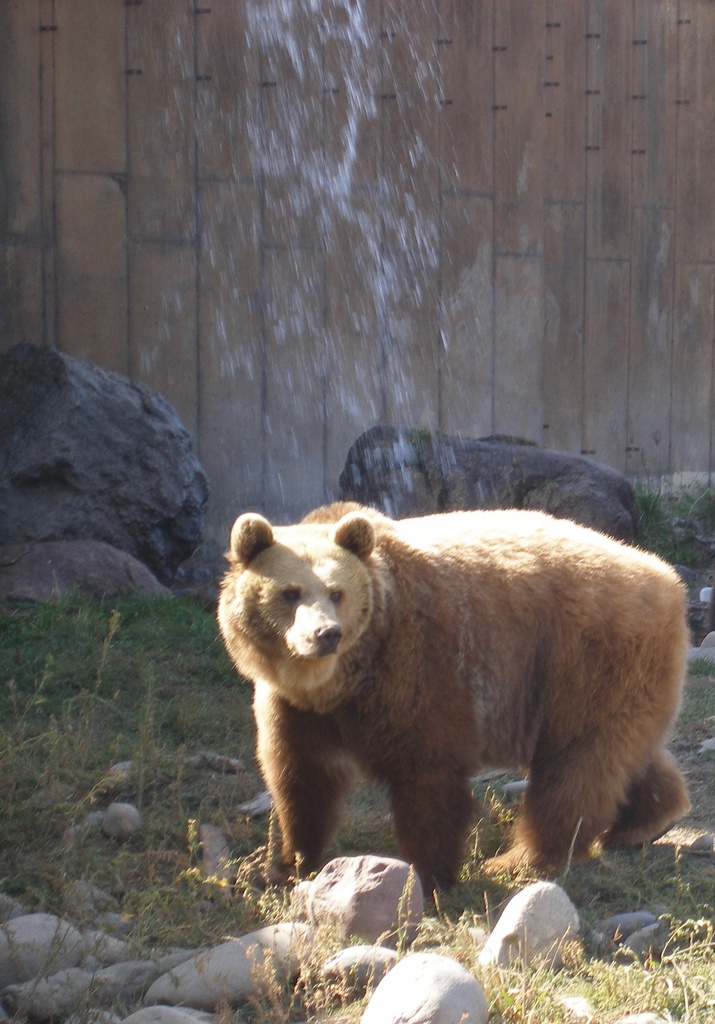 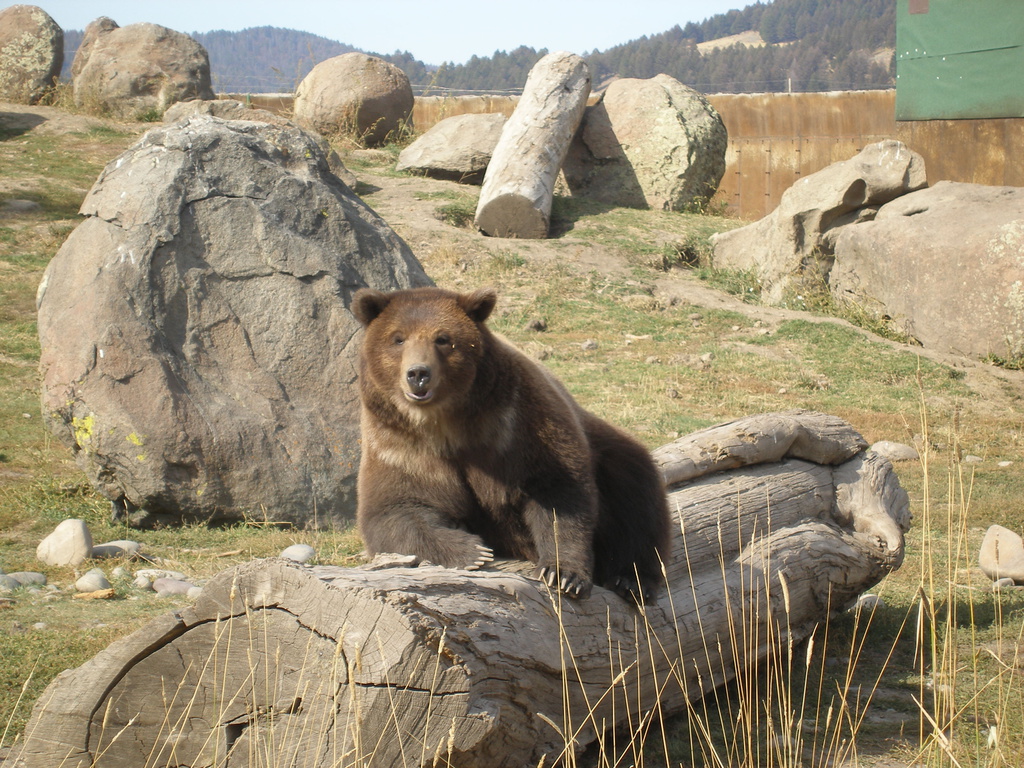 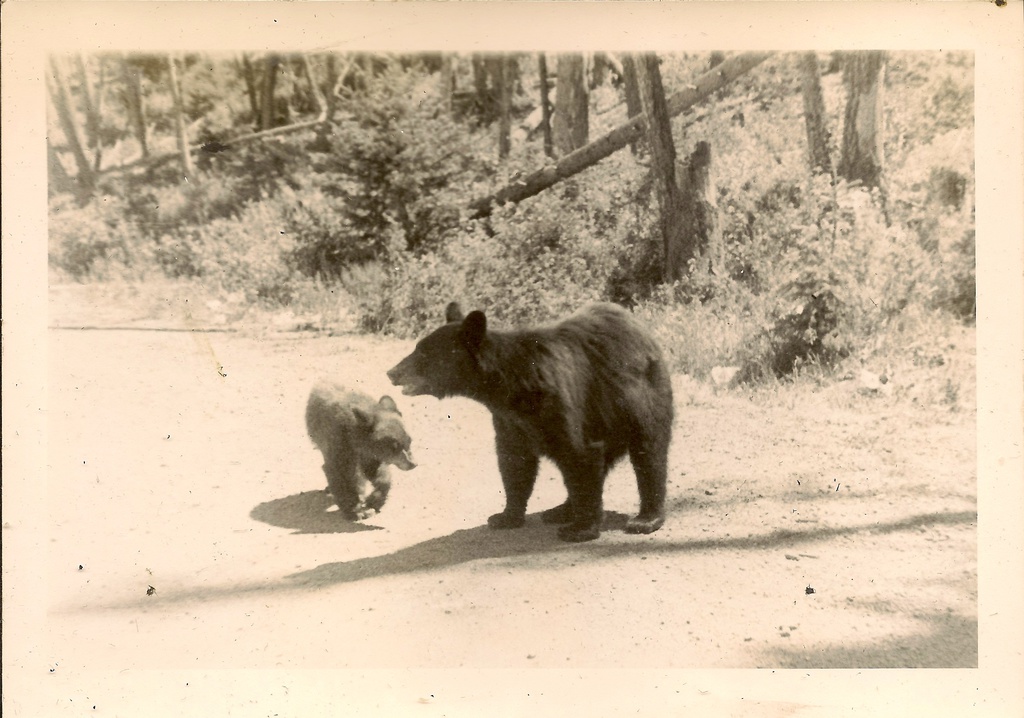 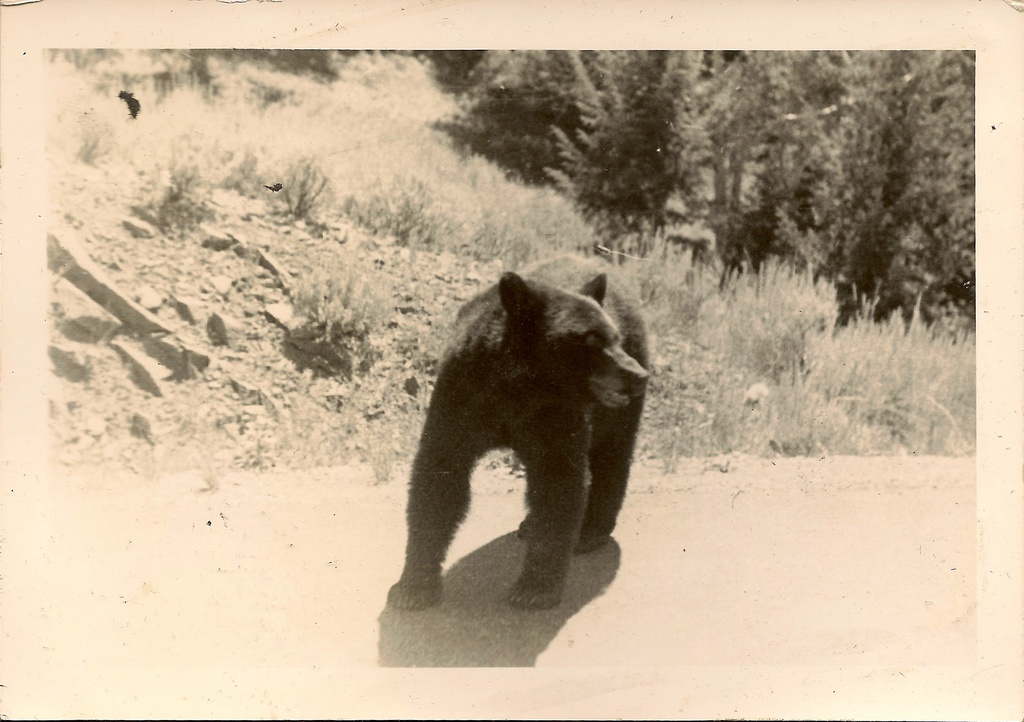 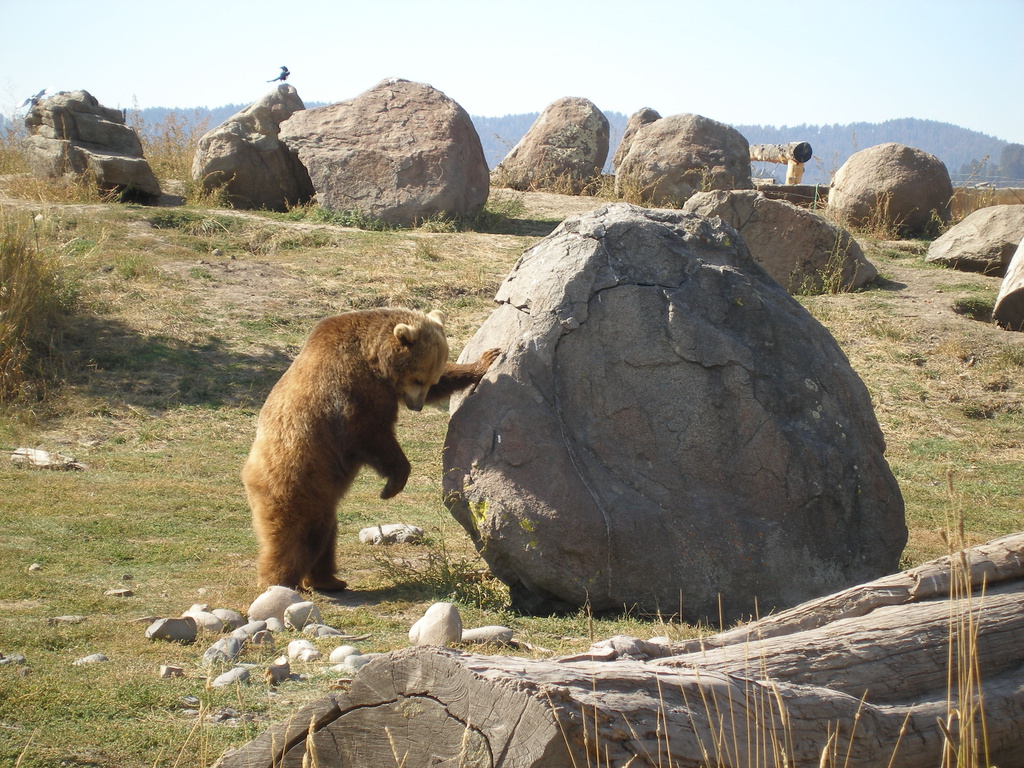