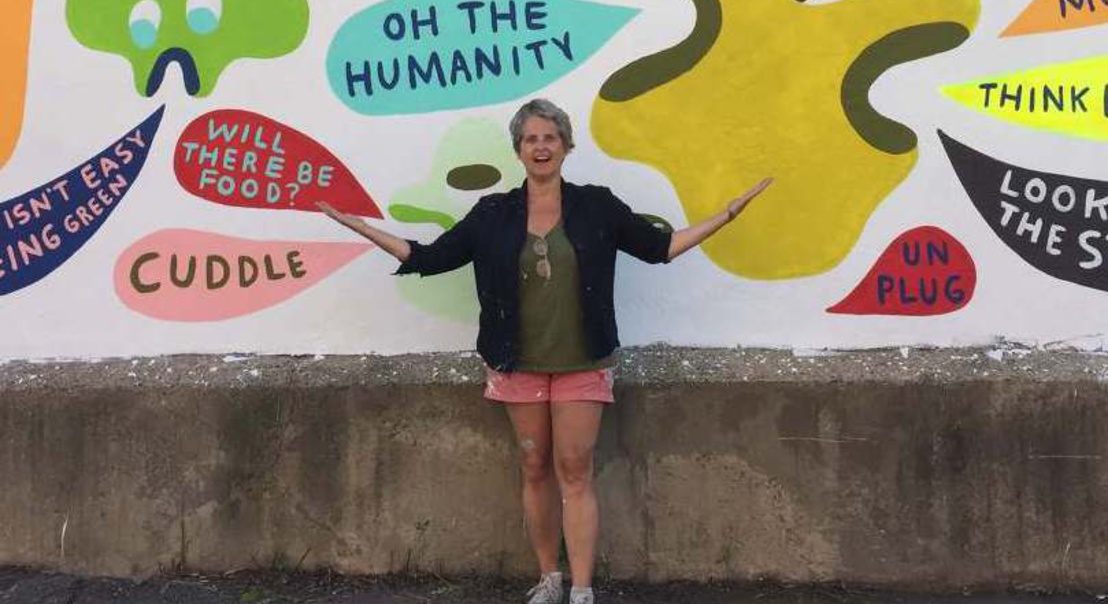 Martha Rich was inspired by her instructors at Pasadena’s Art Center College of Design the Clayton Brothers (Christian and Rob) to ditch pantyhose, quit her office job and make truly original and captivating art. We are all the better for it. She studied illustration at Art Center, sociology at Denison University and received an MFA in painting from the University of Pennsylvania. Martha’s art has been used to great effect by Blue Q on a range of products from soap to socks and bags and she frequently releases limited editions and originals on http://www.martharichartprojects.bigcartel.com.

The award-winning illustrator counts Rolling Stone, Chronicle Books, Bust, San Francisco Chronicle, Texas Monthly, Wieden + Kennedy, Natural History Museum Los Angeles, RCA Records and musician Beck among her clients. Martha was president of ICON6 (The Illustration Conference, 2010) and continues her involvement with ICON, acting as mistress of ceremonies for ICON9 held in Austin last summer that provided her with the opportunity to trot out some big hair wigs and kick ass boots.

Since Trump’s election, Martha has been motivated to march, volunteered for a local political candidate (Larry Krasner for Philadelphia District Attorney) in the local primaries, started attending Philadelphia United for Progress meetings phillyup.org, donated money and art to the cause and pretty much has embodied the #resist movement in action and deed. She admits that she is new to activism, and much like a late convert to a religion she has a zeal and passion that is refreshing and contagious.

She claims she has “become the person who puts up quotes” but hers are resolutely researched, relevant, and useful. With nearly 5,000 friends (editorial disclosure: of those number, we share 379 in common) Martha has cajoled, influenced, inspired, and informed a lot of people. She does it with heart, compassion, and mostly good humor.

Now she posts things on her Facebook page like: “Putin is a big-ass problem. This is fascinating. I am working and listening at the same time. Live streaming of Senate Intelligence Committee Hearings on Russian Interference in European elections.” Then she posts a link to the coverage on YouTube.

She has recently painted several murals, including an outdoor mural done in partnership with Spring Arts, Arts and Crafts Holdings and Mural Arts in Philadelphia. “I used conversations I had with people who were parking or walking by, suggestions from the Internet, history and graffiti from the neighborhood, and random thoughts I have collected through the years for the word bubbles. It's a graphic representation of messages, news, words, advertisements, conversations that we must process everyday,” she explains.

Martha continues to process her new politicization through the lens of her social activism and her powerful yet approachable art. To see more of Martha’s fun and life affirming art, or to contact her, visit www.marthrich.com; martharichartprojects.bigcartel.com; jenvaughnart.com (her agent); Instagram @martharich63 and Twitter @martharichart (she claims this is mainly political retweets and rants, outbursts).

Martha took some time out of her busy schedule to answer a few questions the day after July 4th.

What started your political involvement?

The only real political involvement I had prior to November 9, 2016 was voting. I started voting when I turned 18. I don’t think I have ever skipped a Presidential election and primaries but I didn’t even think about local elections. Like many privileged Americans, I took our democracy/republic for granted. I won’t ever do that again. I am educating myself on local politics and am keeping track of what is happening in Congress like I have never done before.

I was devastated when Trump won. I remember him from the’80s and he has NEVER been a good person. I could not believe ANYONE would think he would be the best choice. When he won a fire was lit under me.

Growing up, were your parents political?

My parents weren’t super political but I remember growing up in a Republican-heavy area and being distinctly aware that my parents were different. They definitely spoke out against injustice and taught my brother and I to be socially aware. The Church I grew up in was activist based. They ran a shop called the Crafts of Freedom shop, where they sold crafts made by people in Third World countries. My mother was involved with that. They were ahead of the game in Fair Trade practices. The church also helped house refugees from Nicaragua and organized protests against GE.

What was your first protest march?

What has the introduction of a bullhorn brought to your life?

I bought a bullhorn but I haven’t used it yet. I am slightly afraid. I am inching towards it. I have never been a make waves kind of person. It is new to me.

Would you ever consider running for office?

Yes. I am planning on running for a small local office: District Committee Member in 2018.

What message do you want to send with your public art projects?

My public art projects are word-based. The words are everyday things I hear, messages I come across and they are random. I always sprinkle messages of inclusion, resistance and hope amongst the everyday, mundane words.

What advice can you offer other artists and concerned individuals about becoming more involved?

Doing anything no matter how small is important. I have never spoken out before EVER, but after you take that first step of saying something out loud and nothing terrible happens, then it is easier to speak louder and louder. I never did anything before because I was afraid of people not liking me. I was afraid of confrontation and I was afraid to draw attention to myself.

I am slowly building up my activism. I think a lot of people don’t do anything because they think they have to go from nothing to radical, loud, spectacle activism. That kind of activism doesn’t work for everyone. There are all kinds of ways to make a difference. You have to find a way that you are comfortable with to start. As you keep going you can push past your comfort zone and do more. It builds and grows and makes an impact.

How do you juggle political activism, teaching, and making art?

Not very well. I am working on it.

You often make art on trains. Do your fellow passengers interact with you or largely leave you to paint in peace?

Most people probably aren’t used to being around artists! Some people ignore me and some don’t. I never know what will happen when I start drawing. I became friends with a conductor once because he would always come and talk to me about my art.

Have you made a caricature or drawing of Trump?

NEVER!!!!!! He makes me physically sick. I’m pissed off that we have to look at his ugly mug every single day. I don’t want to contribute any more visuals of his stupid face to the world. I had to stop my bad men series for a while because it made me so angry. It was unhealthy. 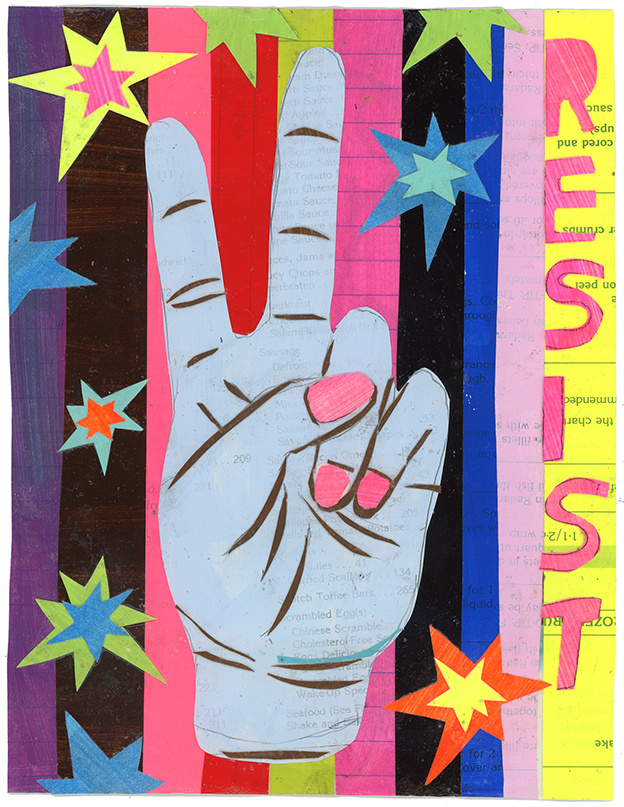 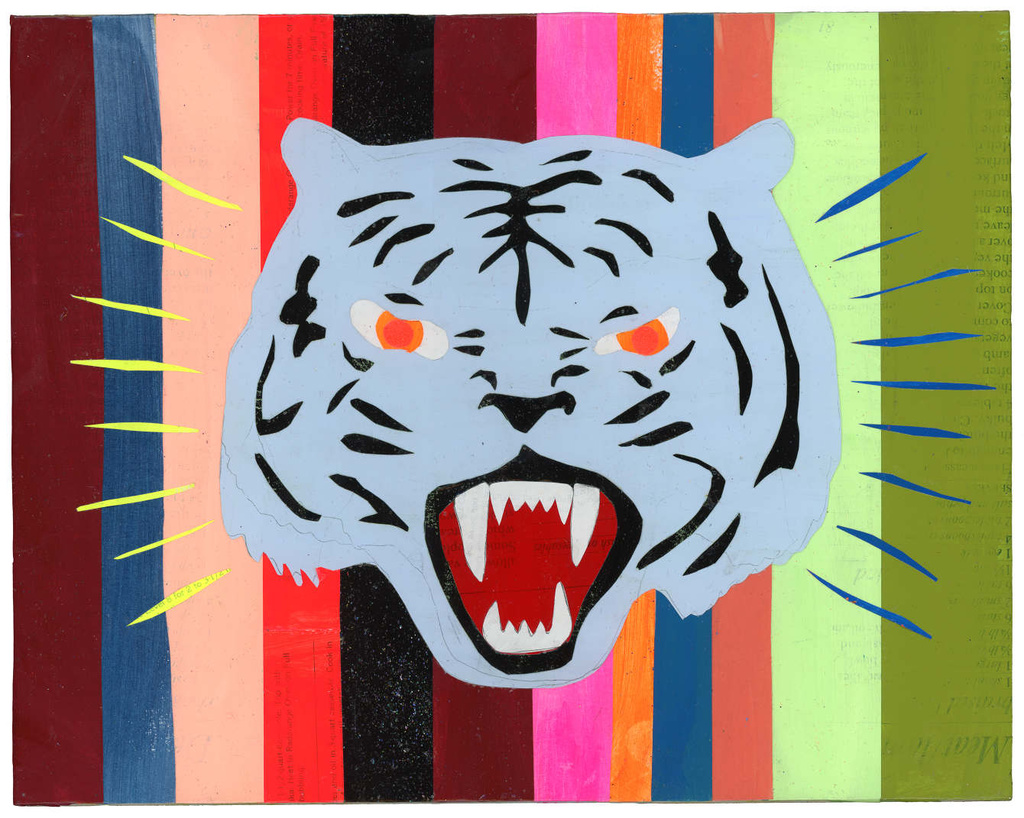 Artwork for a show at Artists Republic Gallery in Anaheim, CA. 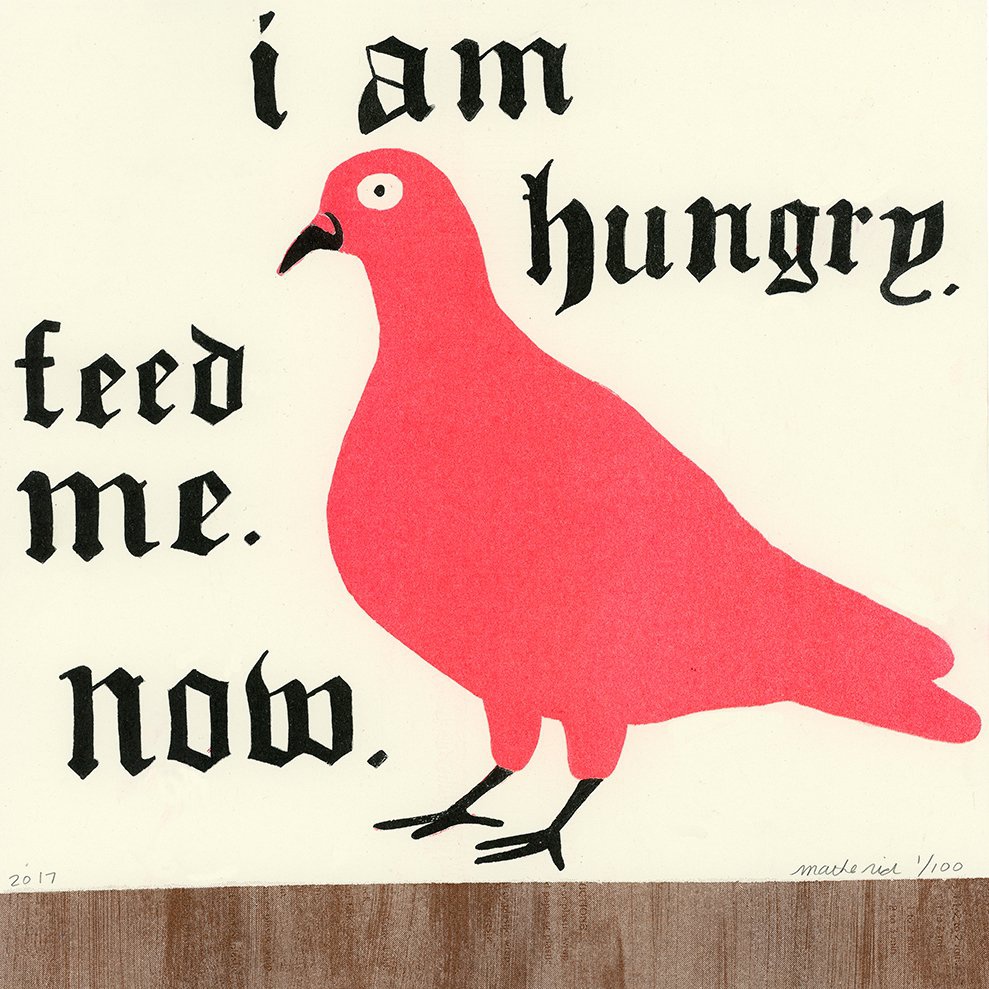 Art for the Hungry Pigeon restaurant. 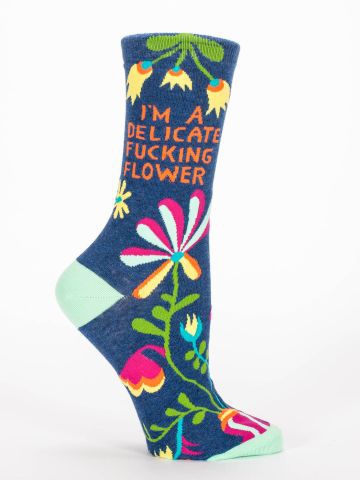 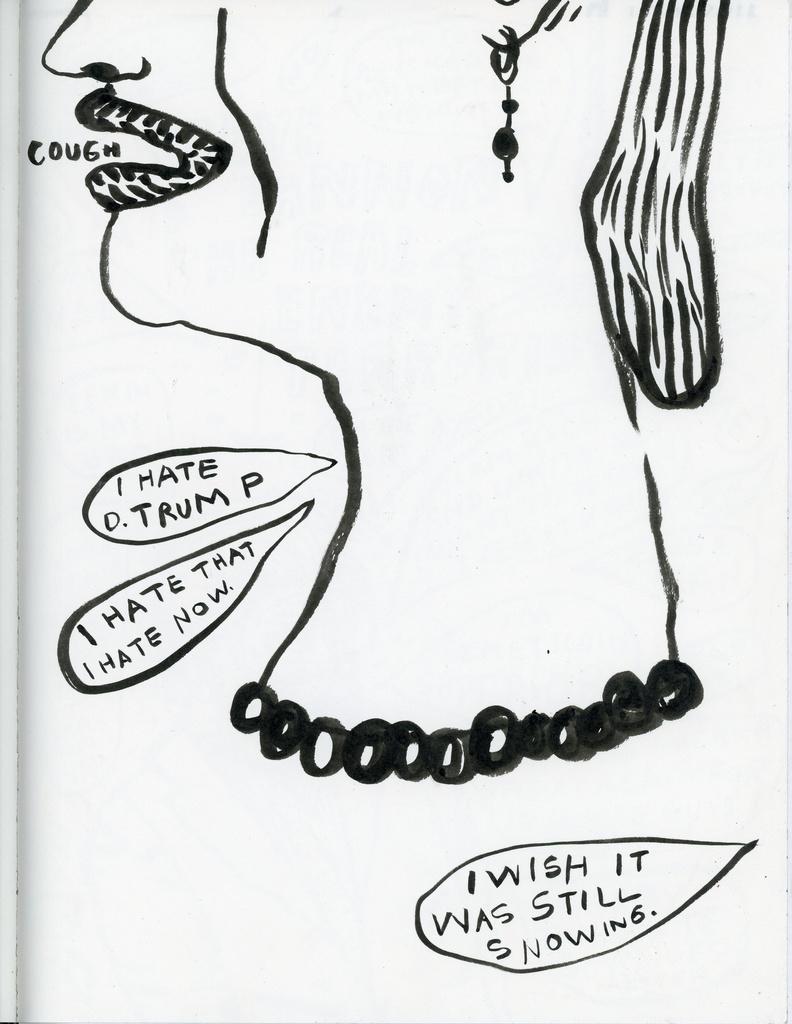 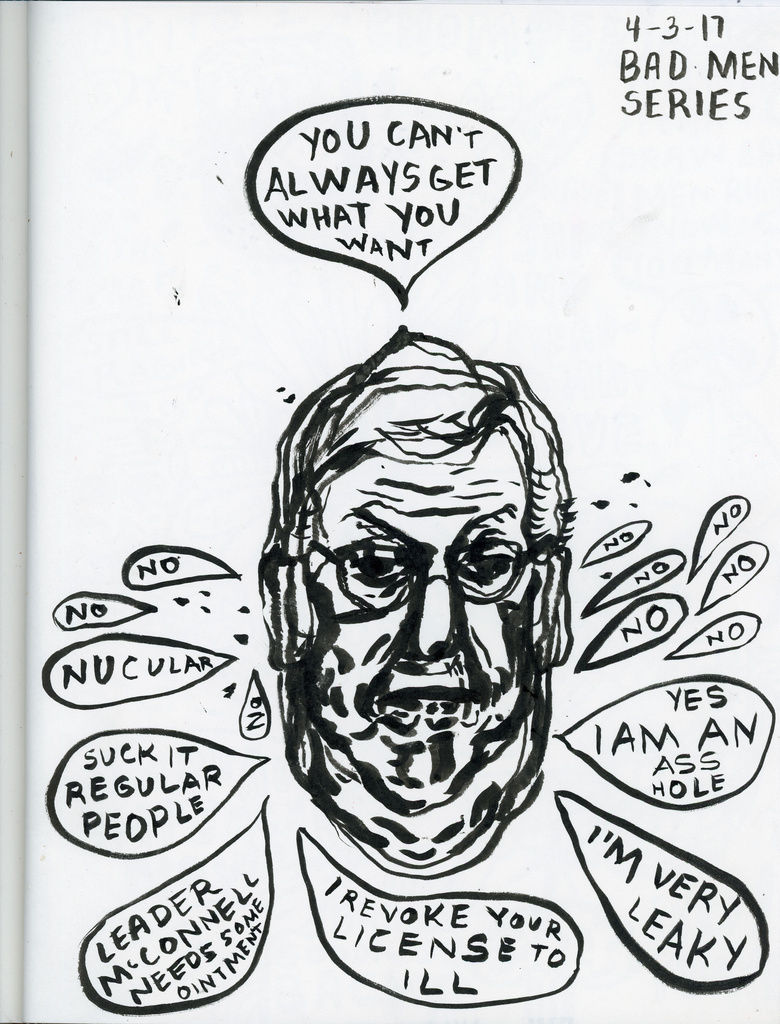