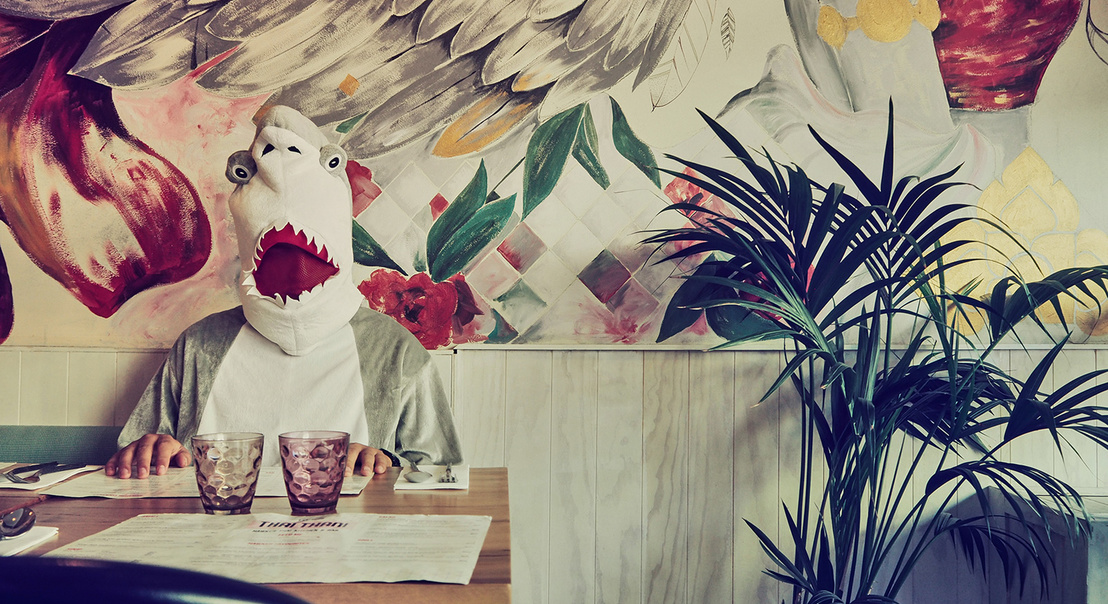 For the second year in a row, I had the pleasure to preside over a jury for the Aufschlag (The German word for "serve" in tennis) last week at the annual meeting of the BFF (German Association of Freelance Photographers) in Hamburg. It was  once again perfectly organized by the BFF's Hamburg section by their board advisor, photographer, and filmmaker Christoph Siegert and his team. Aufschlag is in its 10th year now, the photo awards, however, have only been handed out twice. The event was presented by the BFF Hamburg (and some guests from Berlin) in association with @luerzersarchive and supported by Heiner Hauck Portfolios. It again took place in a beautiful spacious art gallery, Barlach Halle K, close to Hamburg's main railway station.

It was thrilling for me to see and judge the work on display this year and I was particularly taken with the members of the jury, as they were from a new generation of creatives, one I normally don't have much chance to meet in the relative solitude of my work. (I live and work in Berlin, by myself, and contact to the world outside, including our HQ in Vienna is pretty much limited to the digital sphere.)

They were Christine Coring, Senior Art Director at Tracks, Hamburg, a 200-people digital agency at the cutting edge of the industry, plus an incredibly charming woman who told me about her very rural upbringing (for Germany) in rather remote East Frisia, which involved plenty of cows. Julia Ulmer, nee Ziegler, was somewhat of an old acquaintance although I had, in fact, never met her in person. Not only have we featured lots of her work – as an art director and later creative director at the Jung von Matt agency in Hamburg – in the pages of Archive: I remember her name from way back in the 1990s when Walter Lürzer, the magazine's founder, frequently referred to her as one of his best students at the Academy of Applied Arts in Vienna, where Walter was a professor for more than a decade. The other two jurors were the enormously gifted graphic design team Rocket & Wink, who are also based in Hamburg, and whose work was a true discovery for me. They had featured in the magazine with a video in 2017 and as illustrators in a 2017 print campaign for "Die Welt" by the Oliver Voss agency but had not submitted their work on a regular basis to us. (I quickly changed this sorry state of affairs by featuring one of their beautiful posters for the Fritz Kola brand of beverages as our current Print Ad of the Week). In public, or at least when there are photographers around, they put on a disguise turning them into advertising's response to Daft Punk. (I saw them without their masks on and can assure you they look perfectly nice!)

But on to this year's winners! Last year, Eike Schleef's photo of his baby daughter took the jury by storm. This year we found two images that were so different from each other, yet equally stunning that we couldn't help but award two Golds in the Professional category. One is a large-size photo of a panther in a cage that struck me as I first entered the space where the photographs were hung in Petersburg hanging. The jurors all wondered if the bars of the cage were added in post-production, so Christoph had the photographer, Hans-Jürgen Burkhard, called (we, the jurors, didn’t know at this point who had shot what) and we found that this was in fact a one-shot photo. Hans-Jürgen later told me that he captured the stunning image in a traveling zoo in Siberia where his job as a news photographer for German weekly Stern had taken him. The obvious reference when I first saw the image was of course the famous poem „The Panther“ by German poet Rainer Maria Rilke from 1902 which opens with the lines: Sein Blick ist vom Vorübergehn der Stäbe / so müd geworden, daß er nichts mehr hält. / Ihm ist, als ob es tausend Stäbe gäbe / und hinter tausend Stäben keine Welt. (His gaze against the sweeping of the bars / has grown so weary, it can hold no more. / To him, there seem to be a thousand bars / and back behind those thousand bars no world.) 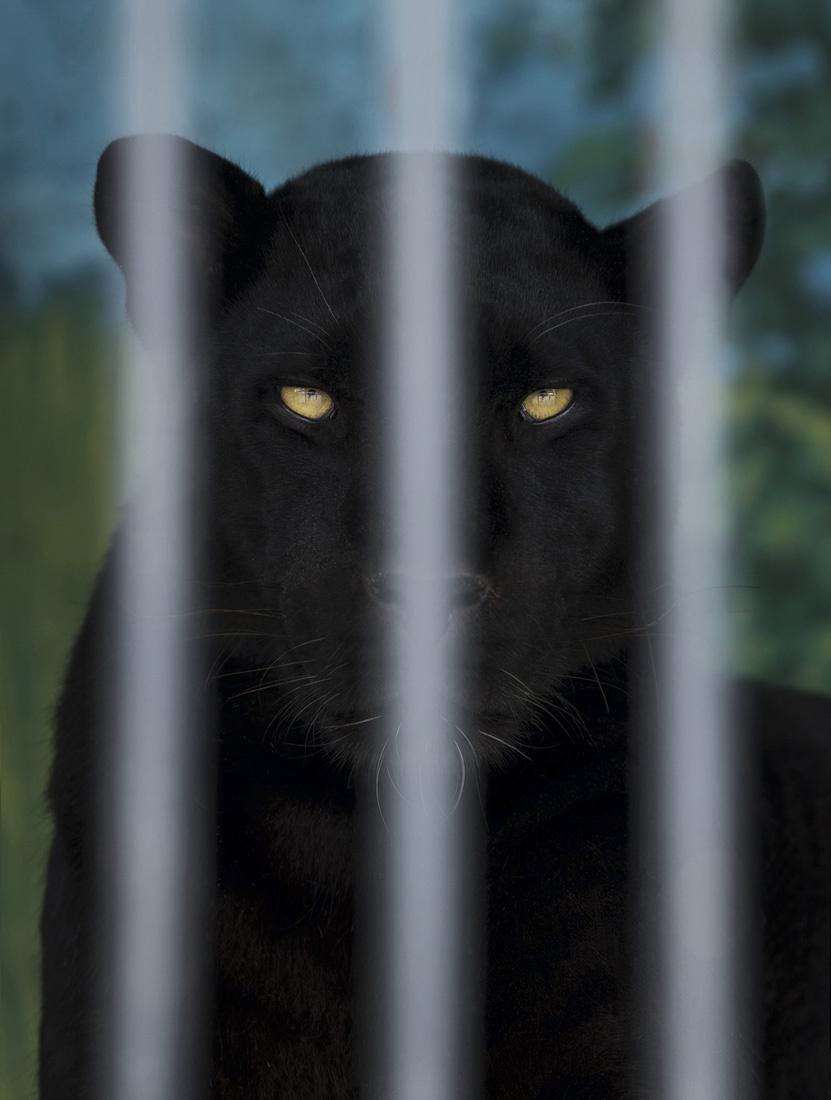 The second Gold award went to another large image, this one by Joerg Schwalfenberg. At first sight it seemed like one of those photos depicting houses in war-torn countries such as Syria. In face the photo was taken right there in Hamburg, not far from where we were, and showed a former post office building from the 1970s that was torn down last year, in winter. (If you looked closely you could see how the „entrails“ the high-rise seemed to be vomiting were covered in thin ice.) The image provided the very open theme of this year’s exposition „it had to be“ with a kind of question mark by touching upon topics such as gentrification, our throwaway society, and the exploding real estate market of inner cities, which favors demolishing of all kinds of buildings to make way for luxury accommodations. 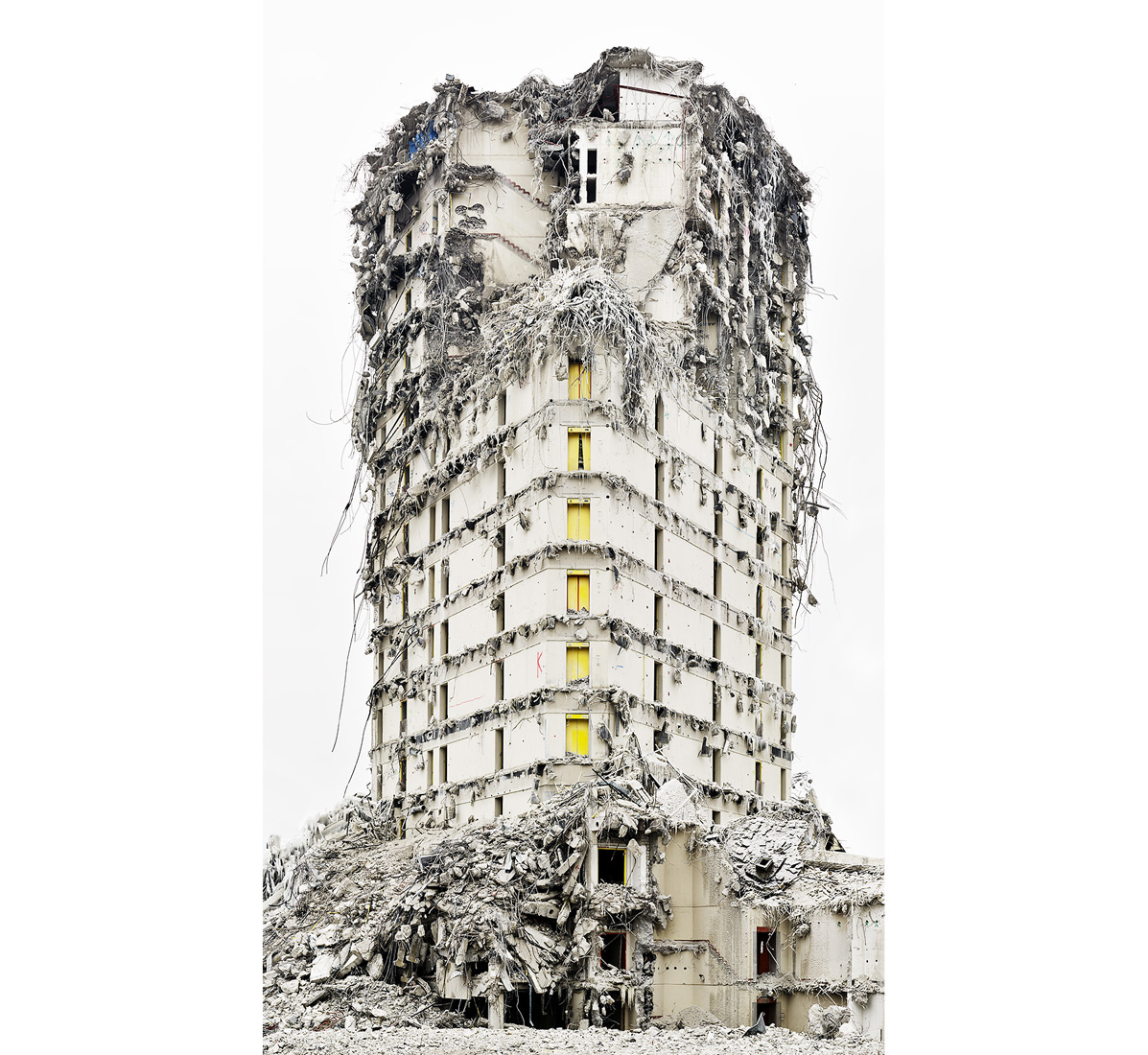 There were four honorable mentions and they went to Maak Roberts, Julie Nagel, Peter Hönnemann, and Tobias Habermann: 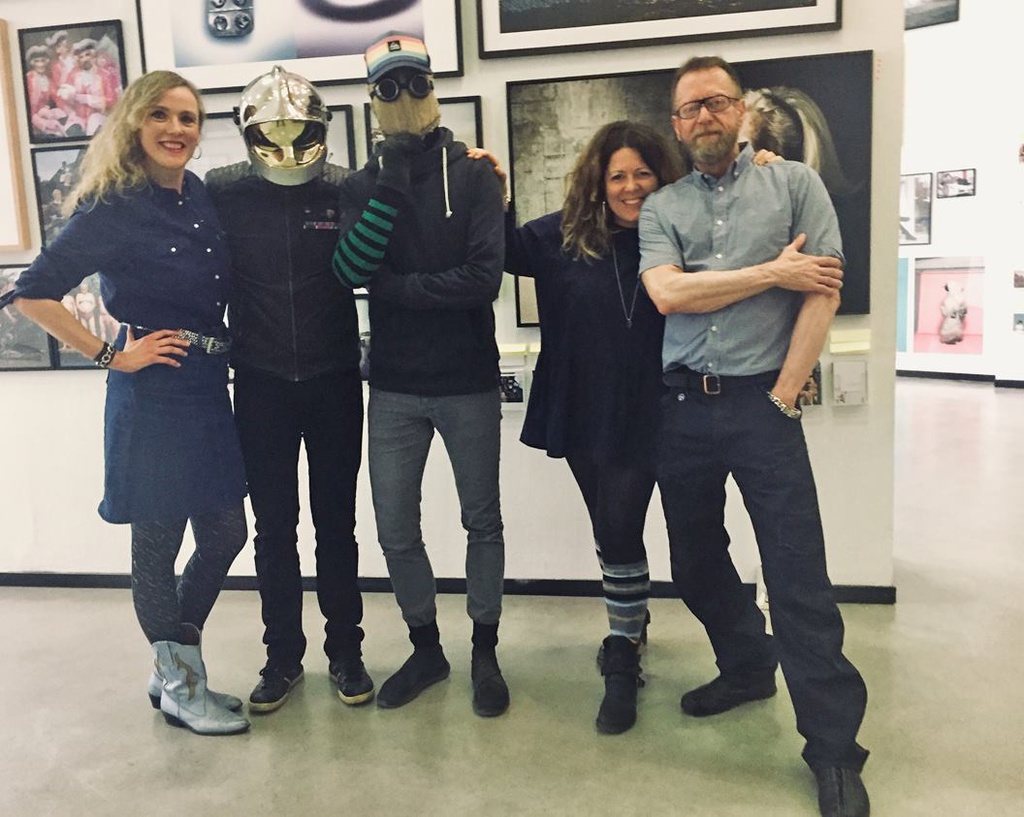 The BFF "Aufschlag" Junior Award went to Cecilia Aretz for this quirky film, which the jury commended for its cheekiness, something that is sadly not all that common with student work nowadays. 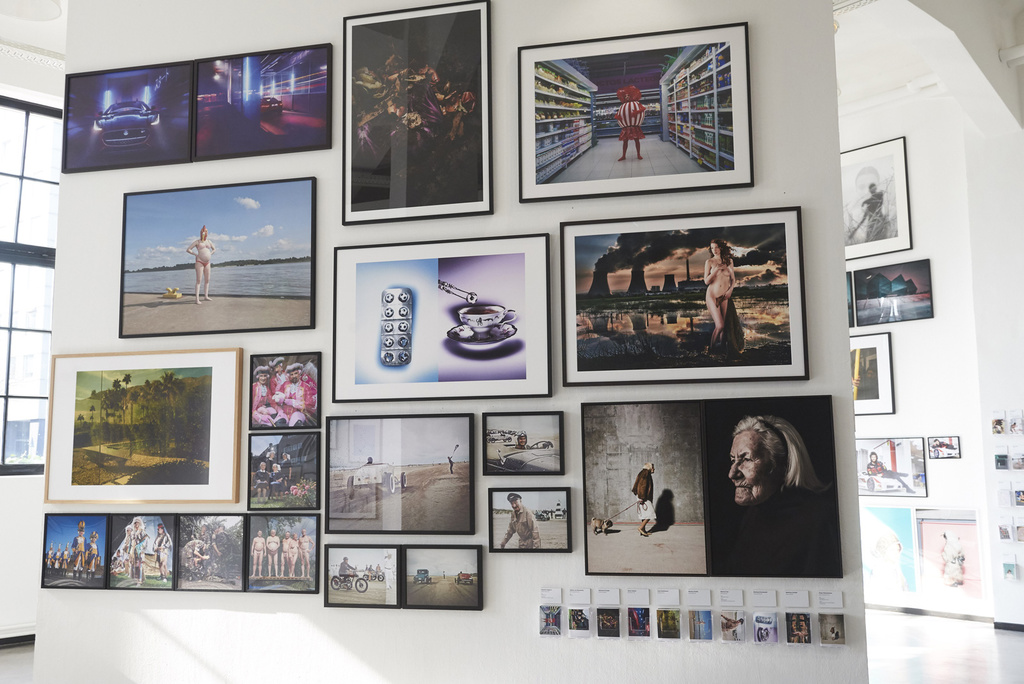 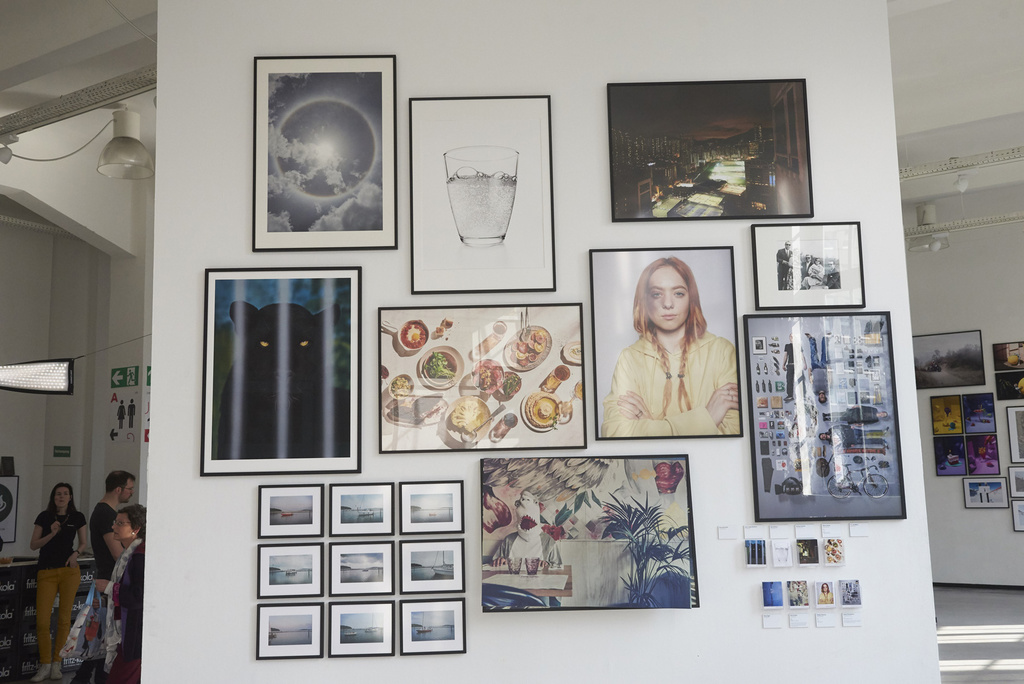 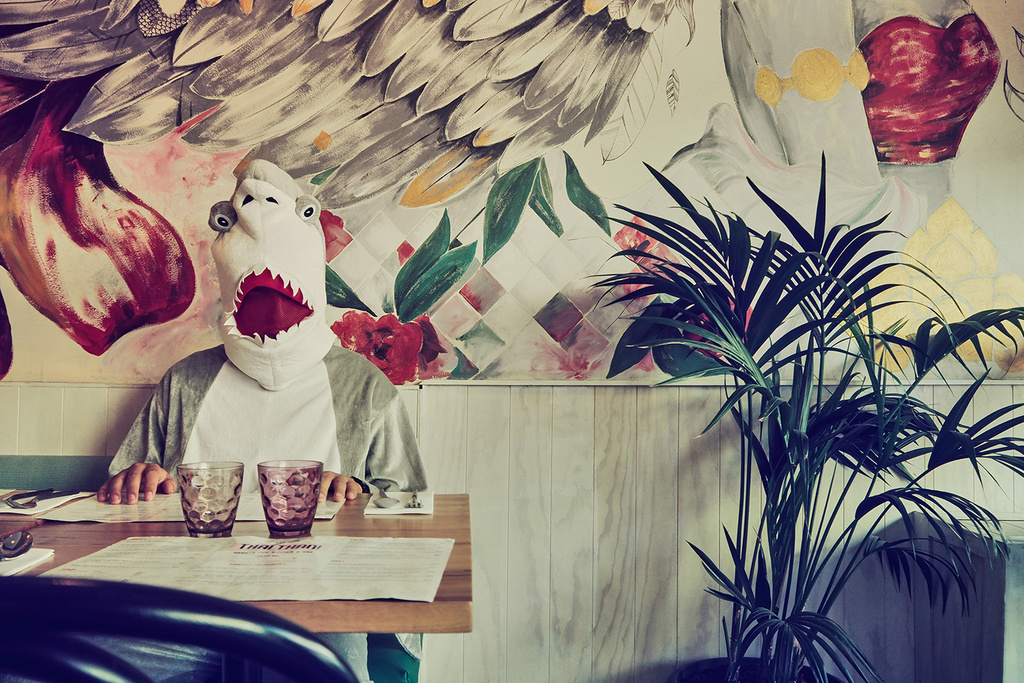 Top image in this blog is this delightful photo – part of a whole series – by Bernd Opitz. 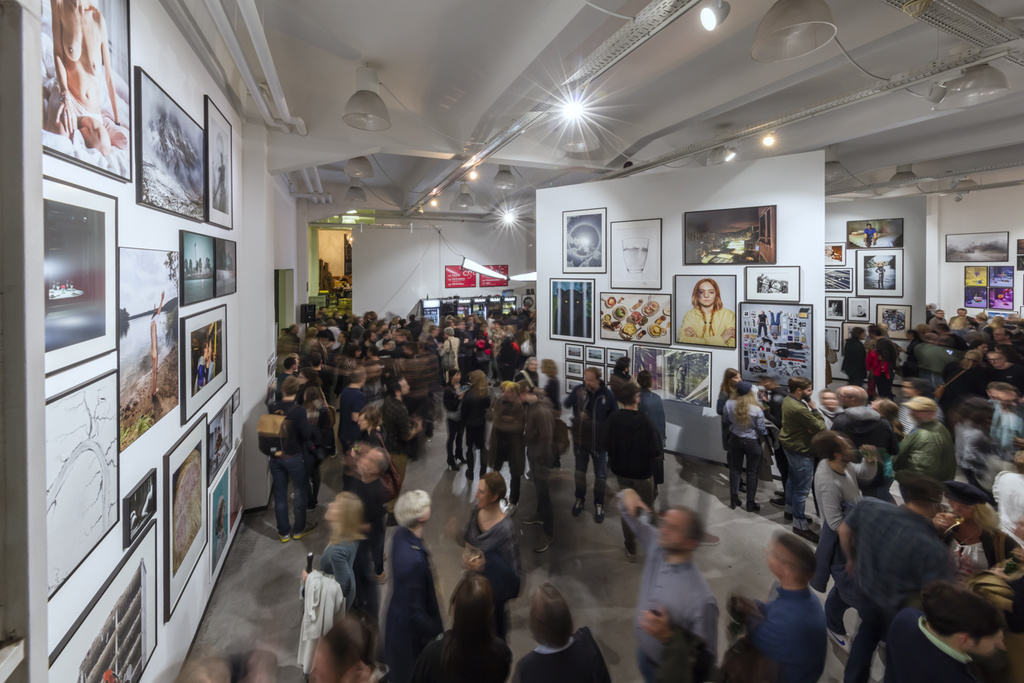 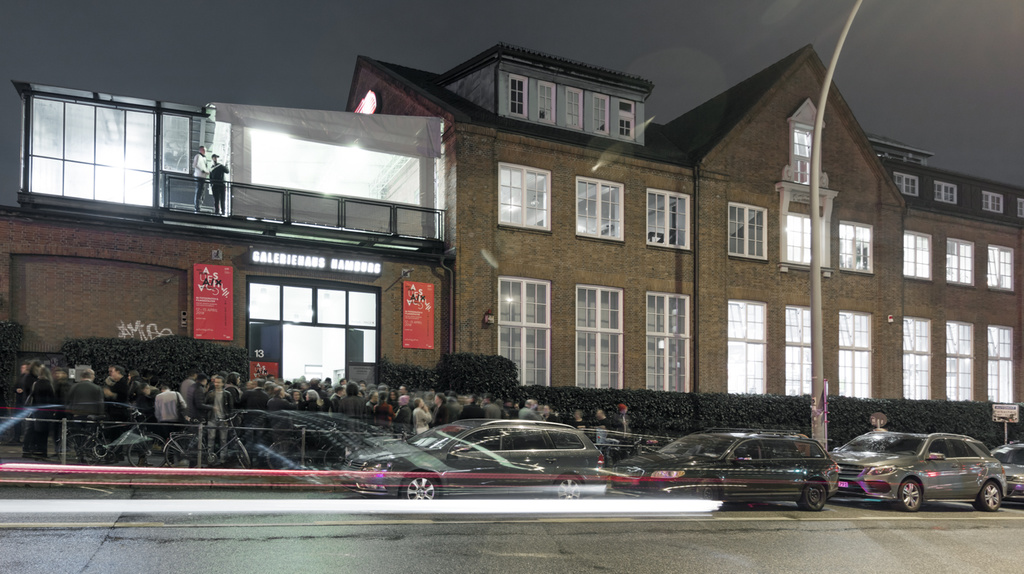 The crowd outside the "Aufschlag" Photo Awards party Friday night. The event drew some 2,000 visitors. 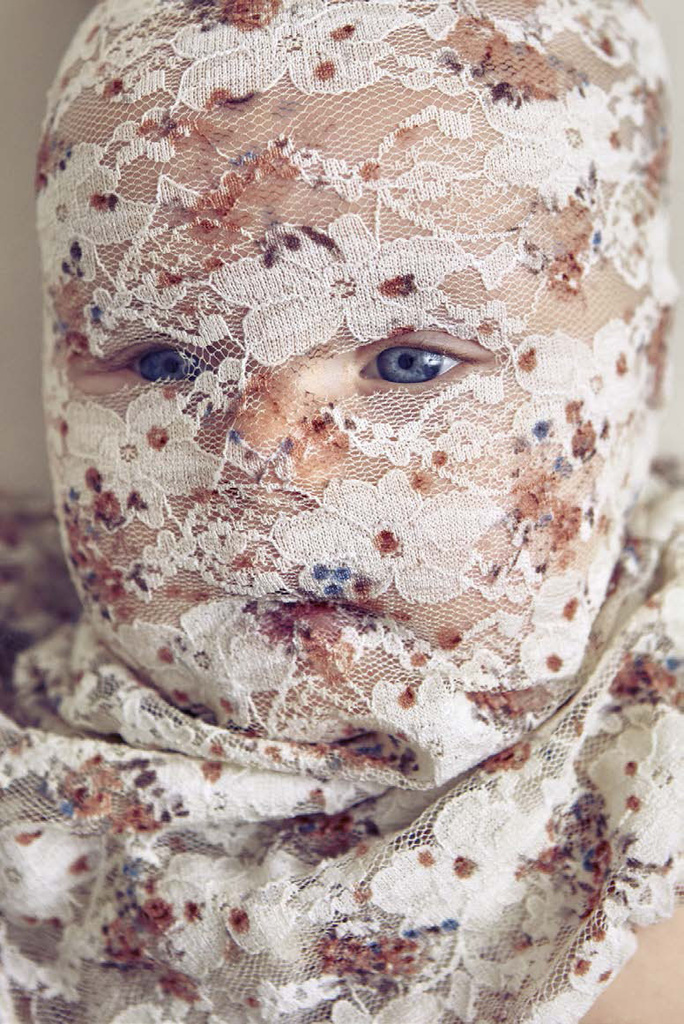