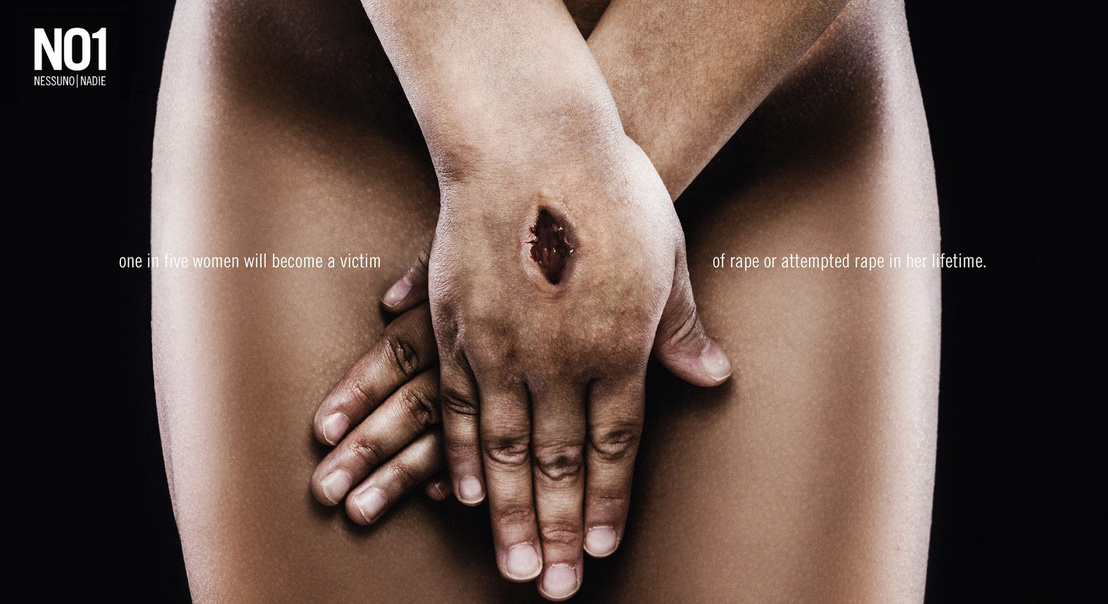 The Provocative Genius of Erik Ravelo

Erik Ravelo Suarez is one of the important political artists we have today. He's also a great image maker and I confess to being a fan of his output – whether it's art or used for advertising. For him working in the ad business has been both a blessing and a curse. He had his big break when, years ago, he joined Fabrica, Benetton's ad agency in Treviso, Italy, as a successor to Olivero Toscani. It made him quite famous but also attracted hordes of copy cats. We were able to feature several of Erik's campaigns in the magazine, one of the images even graced the cover of Lürzer's Archive Vol. 1-2015. Not long ago I talked to the Cuban-born artist:

Hi Erik, can you tell us a bit about your background?

Erik Ravelo: I was born in Cuba and I never studied design or advertising at all. I was a student of Fine Arts at the The National Academy "San Alejandro". Growing up I was not at all connected or even aware of visual trends or cool avant-garde design from Europe.

Then what got you interested in fine art at the time?

All I had were political manifestos and improvised graphics on the walls, which were all about socialism. I grew up between faded letters painted on the walls of houses with words having become invisible with time, the scrappy remains of old political posters of a forgotten revolution.

Until the age of 18, when I left Cuba for Argentina, I had nothing to do with graphic design or what is called advertising in the western world as there was no such thing in Cuba at all. No poster campaigns no press or TV ads, no radio ads, and of course there wasn't any internet – so no online ads either.

In Buenos Aires, I met I guy who ran an ad agency called Agulla y Baccetti. They made great ads in the 1990s and early 2000s. And the environment of the agency was so cool man, full of young guys thinking 24 hours a day. Cool campaigns, young handsome boys with great cars – it was the hottest shit ever. The new contemporary way of being cool and successful. Much too cool. Not really for me! From the very start, I hated this environment

Then, a colleague from Argentina told me about Fabrica, Benetton's communication agency. When he told me to apply I was already planning to travel to Italy anyway, so it happened: They hired me at Fabrica. Even though at the beginning I was planning to stay for just a year I ended up being there for almost 14 years, because to be honest, I had nowhere to go. I could not go back to Cuba. And time just passed with me playing with artistic tools in the middle of nowhere in the countryside of Italy.

I was playing with COLORS magazine, playing with Benetton campaigns with UN campaigns and there was a lot of interesting stuff for me at the time. I had fun. It was like a lab where we all could come out with everything we had in mind. I know It sounds crazy but I never met  Oliver Toscani when I was at Fabrica. I arrived there when he was already gone and I left Fabrica two years ago before he went back, just a few months later.

My work walks the fine line between art and advertising or communication. I call it "Some kind of advertising“ because I think that art sometimes use codes from advertising, regarding for example how fast you get the message, the synthesis, and also the opposite is the case, with advertising often borrowing things from art. Almost all the campaigns I did for Fabrica during my period there existed in the space between advertising and art. You could use it for an ad, for a print ad or an outdoor campaign. but you can also put it in a gallery, or simply do a GUERILLA street art style. Some of them can become even a graffiti such as The Untouchables

So, I like to say that I don't give a shit about what the medium is. I'm fluent in most of them, be it photography, painting, sculpture. In the end, it's just ideas finding an expression. They communicate; they have the power to make people think and even why not, also cause change.

My work is there and it went out in the web without any reservation, so lots of people around felt the need of interacting with it so, some of my pieces completely got out of my control.

Which basically means that it gets copied again and again?

It’s a weird phenomenon lately where I get the impression my work is inspiring lots of people around the world because they copy so much it that sometimes it makes me go crazy. If curators and museums were calling me instead of calling the people who copied my work I would be one of the busiest artists around I guess. You can find my work in places like the Saatchi Gallery in London (Christ on the electricity pole) with a different artist's name attached to it. He just decided to photocopy my work and place it in the gallery. It is actually a piece of art I originally made back in 2007 in Cuba.

Another example is the "Black Pieta", which was exhibited in a gallery in Milan. I created that to show my support for migrants. But except for one detail, the piece was re-made some months ago by some other artist and gets exhibited under another name.

You can also find my work copied by others in hipster's music video clips, such as the one by Damian Marley's Nail Pon Cross, which is trying to look little bit rasta as his dad, the great Bob certainly was. No shame at all, but "Hey, that's my work there you're using!"

You know once I made the Pope (Ratzinger, not Francis!) so angry! I showed him in that Benetton Unhate campaign and I sometimes now think that I am under some kind of bad spell because of that. Don't you think? Because hell, they copied the shit out of the Unhate campaign, too! Pairs of kissing politicians that I never had anything to do with, suddenly cropped up all over the place. Of course, the basic idea goes back to that famous kiss of Brezhnev and Honecker painted on the Berlin Wall a long, long time ago. But I'm not mad at those copycats, the "artists" you know, otherwise I should be mad also with the one who made the cover of Revista Noticias in Buenos Aires. They featured a Kiss between Maurizio Macri and Obama. Or maybe with the one who designed the Marco Rubio-Trump Kiss outdoor campaign, I remember the first time it happened, I made an ad for COLORS magazine No. 82, the environmental issue. I did a polar bear shaved  like a poodle - because of the melting of the ice caps as a result of global warming. I found that dogs normally get shaved in summer because of the heat. It was published there and then I found someone in Brazil who did an ad for Volkswagen with a sheep shaved exactly like my bear! And that won lots of awards. But I’m happy for them.  The fact is that COLORS magazine was distributed in many countries around the world, so the ideas traveled fast!"

Thank you, Erik, for your time!

So much from Erik Ravelo. As for me, I'll be thrilled to see more work by this very talented and unique "Artvertiser" soon again. 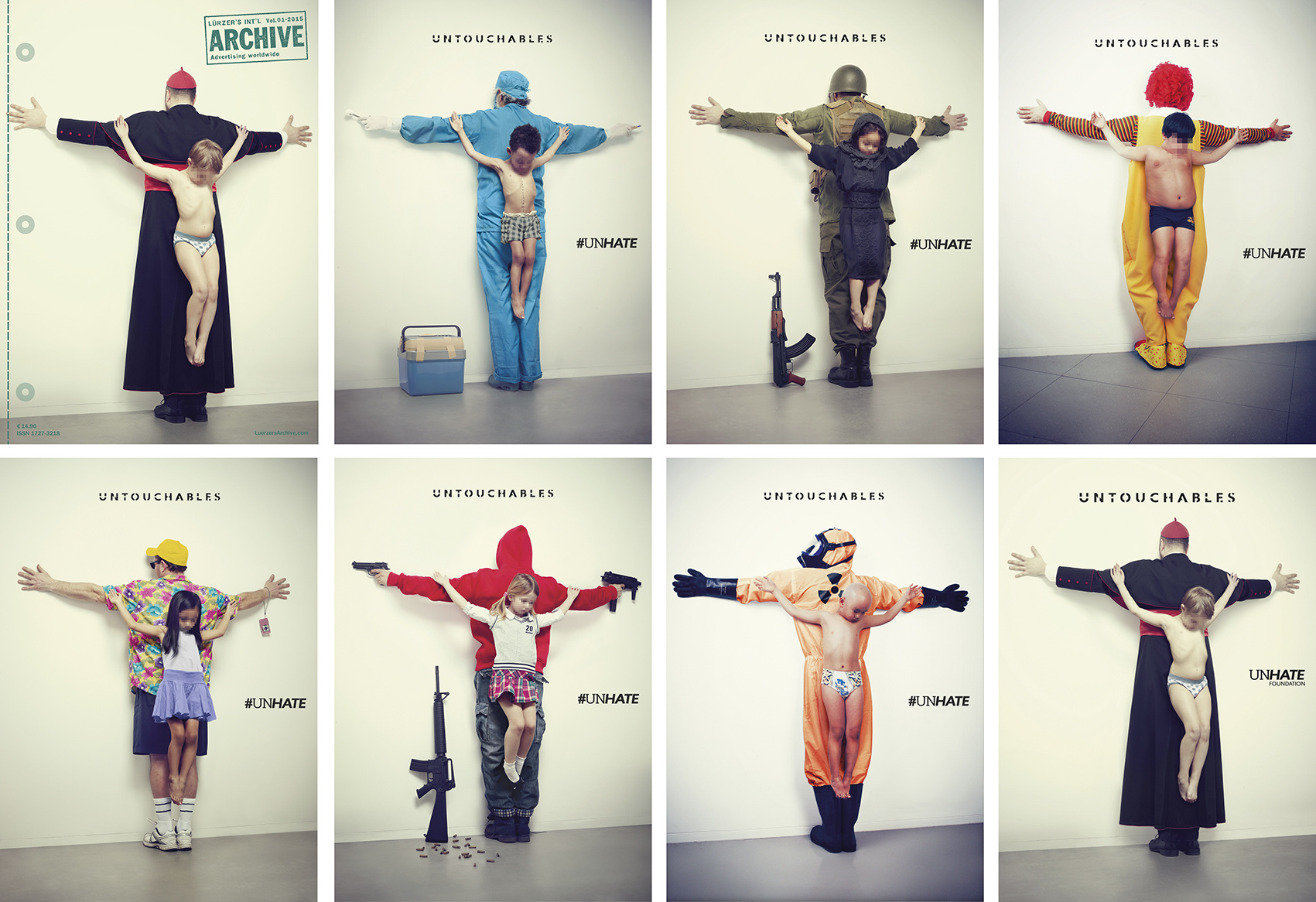 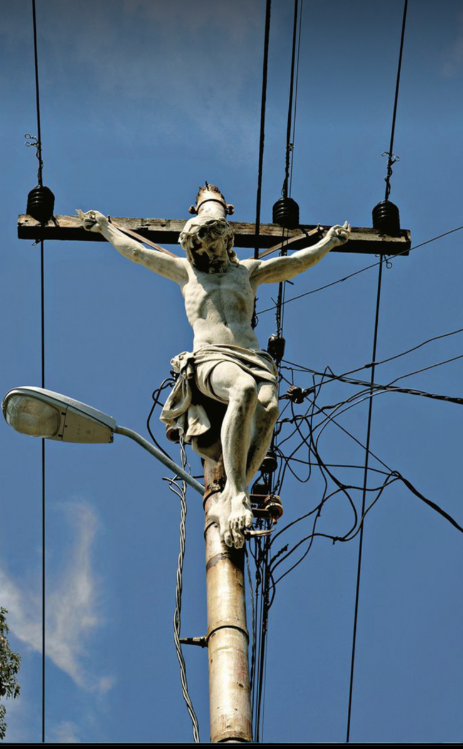 "Christ on the electric pole," a work created by Erik Ravelo back in Havana, Cuba, in 2007. 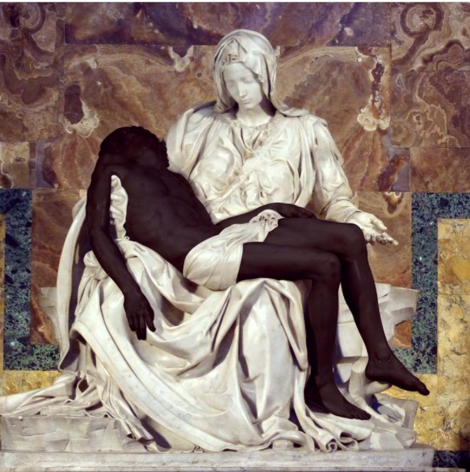 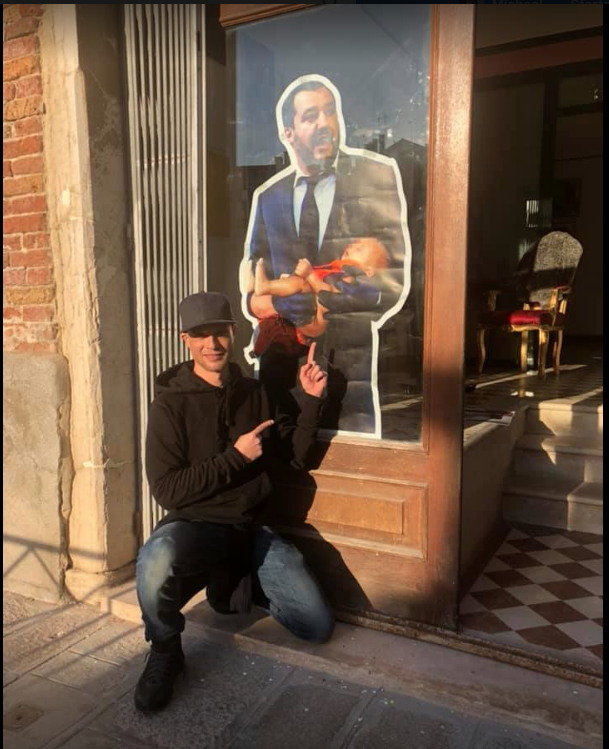 Erik Ravelo next to an image he created for an exhibition in Venice. The face in this photo montage is that of Italian Vice Prime Minister Matteo Salvini, well-known for his rejection of migrants fleeing to Italy. (At the opening of the exhibit the police showed up.) 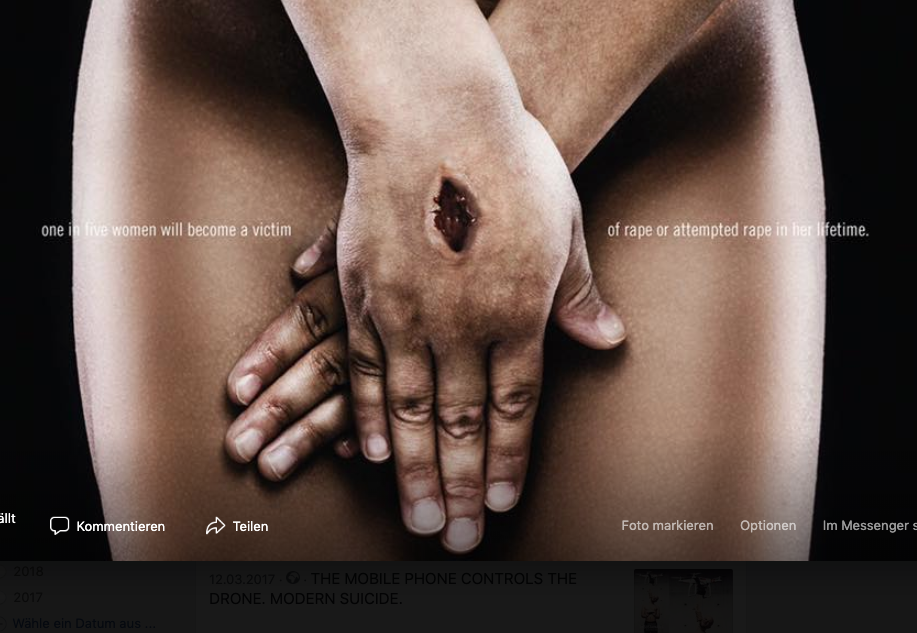 Text: "One in two women wil become a victim of rape or attempted rape in her lifetime." In yet another incident of censorship, Facebook barred artist Erik Ravelo from promoting his campaign 'End Violence against Women'. The campaign aimed to create awareness by using metaphorical pictures. 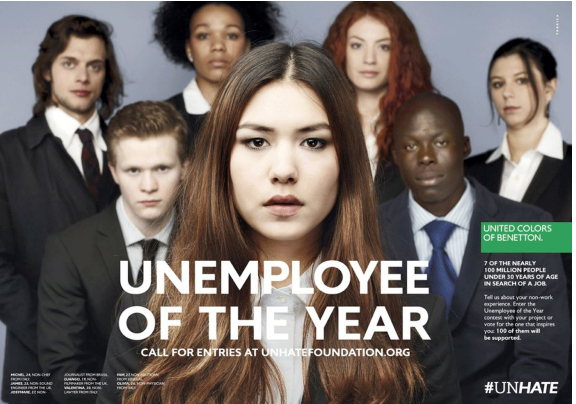 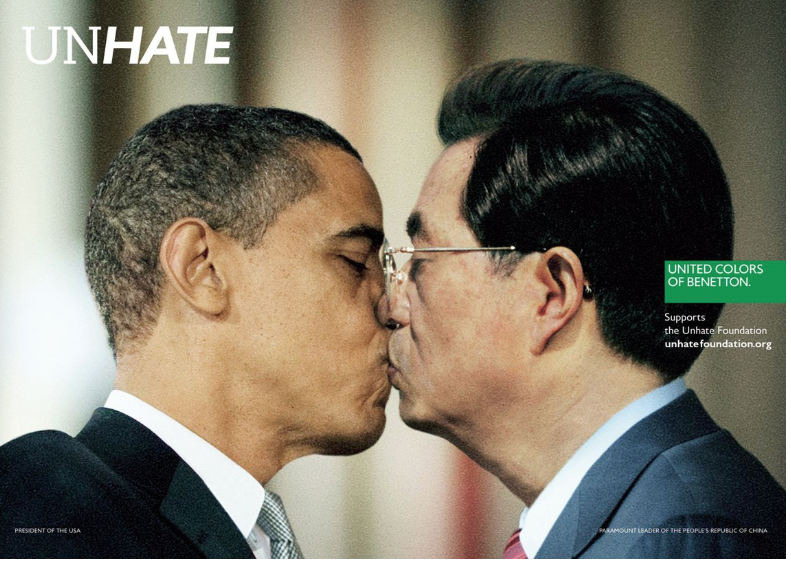 Making-of-video of Erik's "Lana Sutra" project for United Colors of Benetton. "The emotions each colour gives, the cosiness of wool, a warm embrace: these are all feelings that unite the human kind and are expressed in a new art form in line with its time." The Lana Sutra is a series of 15 installations conceived as a homage to love and dedicated to the desire for an equal and sharing society.