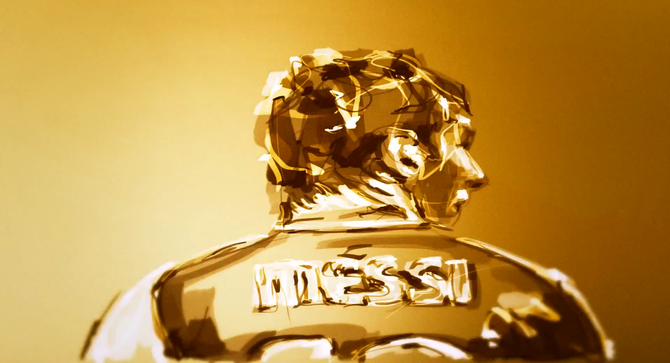 Lionel Messi has been named the world’s greatest footballer for an unprecedented fourth year in a row and within seconds of his receiving the Ballon D’Or trophy in Zurich this sumptuous tribute film, created by Hotspur & Argyle’s Richard Swarbrick, was released by Adidas. The film features some of Messi's incredible tally of 91 goals in 2012.

As a director, Swarbrick has developed a range of animation techniques, many of which he combines to great effect with live action.

The film was rendered in apposite gold by Swarbrick and his animation assistants Hannah Wroe and Amy Philpot. The editor was Simon Hargood at the Assembly Rooms, Iris Worldwide’s producer was Fiona Campbell and creative was Adam Fish. Danny Fleet produced for Hotspur and Argyle. It is set to the sound of “Follow” by Crystal Fighters.

The film might look incredibly familiar and that is because Swarbrick has previously very similar shorts for the football coverage of UK newspaper, the Sun, which were in turn based on his earlier personal work.

One in the series focused Wayne Rooney’s famous overhead kick goal against Manchester City in 2011 and in a departure from The Sun’s traditional style, painterly, impressionistic animation combined with a haunting music track of Swarbrick’s own creation.

Swarbrick’s “El Clásico” animation was a stunning celebration of Barcelona’s 5-0 thrashing of arch rivals Real Madrid in November 2010. Commissioned by Sky Sports for their coverage of the return match in Madrid, the vividly colourful film portrays what many regard as one of the most complete performances by any football team in history.

This took long in the making because of the extra colour and more detailed close ups. Richard worked closely with Sky Sports producer Luke Arthur and was working right up to the Day before the game when the Sky team departed for Madrid.

This made the filmmaker an obvious choice when Adidas charged agency Iris Worldwide with the task of marking this sporting moment.

The Sun “Football, Brought to Life” by WCRS, London