Ali Ali and Maged Nassar – 'the guys behind those Panda Cheese ads' – set up Elephant in Cairo after losing 12 consecutive pitches in Dubai. Now they are the most awarded shop in the region and their clientele has included Sony, Coke and Google. Ali talks to Lürzer's Archive about Egypt's chaotic advertising, silly executions and why he hates the creators of "The Most Interesting Man in the World". 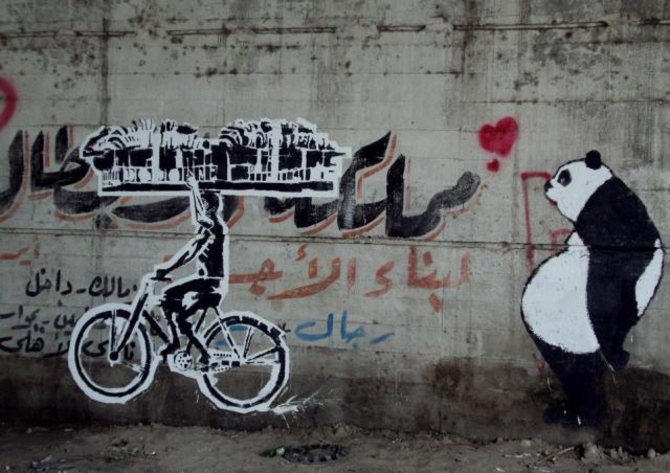 Image: Post-revolution graffiti in Zamalek, Egypt/Arab Stands. Ali and Maged's Panda Cheese ads were a viral sensation and the most watched ad in Arabic on YouTube.

You refer to Elephant as 'not an agency'. Tell us a bit more.

Elephant is not an agency. It really isn't. In no way does it resemble an agency. We don't have a billing department, client servicing, planning, studio, management, a CEO, an ECD, the works - none of that. It's just Maged and I. We are Elephant; the elephant in the room so to speak. Whenever we present ideas to clients there is usually a long silence and stunned faces. And then someone in middle management will say: "Ok guys, we'll call you."

What campaigns are you working on at the moment?

We just finished shooting a funny spot for Bawadi Halva Spread, a sesame sweet spread like peanut butter, but sesame. We're very proud of it. Our concept is built around it being the fastest sandwich you can make. Sweet Made Fast.

How does advertising in Egypt work differently to other regions? What works and what doesn't?

Advertising in Egypt is very chaotic, disorderly and haphazard, which is both good and bad. It's bad because it can drive you insane and you never know what's going to happen next. It's good because there is so much you can do here that you couldn't do anywhere else (because of this giant mess we're in). Our latest campaign is a case in point.

The "Never Say No to Panda" series, featured in Archive Vol. 1/2011, has become somewhat iconic. What has been your favourite Elephant campaign to date?

You'd be surprised to know that Maged and I are not that crazy about the Panda. I mean we obviously love it now in retrospect, because it helped put us on the map, but we weren't too excited about it when we first shot it.

We like our Coca-Cola U20 Fifa World Cup campaign. The insight is very close to home, the campaign is genuinely Egyptian, and we had a great time shooting it. They were also a huge hit in Egypt, much bigger than the Panda. We also love our Bawadi Prisoners campaign which picked up the Grand Prix at Dubai Lynx a year ago.

Last year you spoke at Cannes and said advertisers' approach to digital was getting monotonous... the industry is becoming less fun... Do you still feel the same way?

Yes indeed! I feel that slowly but surely all the fun in advertising - the good old eighties fun that made us all want to be in this business - is slowly being replaced by a giant web banner! Enter the digital era: a time for microsites and agencies that shoot more case videos then ads. Just this year in Cannes, the number of case videos presented (mostly for ghost ideas) exceeded the number of TV spots and I think that is a bad sign.

Creatives are slowly starting to resemble IT guys. Our award shows and festivals are starting to look like web development conferences. Surely there are lots of great ideas on the digital side, but I still believe the real fun and our real craft lies in traditional TV and print. At least these are the two categories I go to see at Cannes. Yes. I'm backwards like that.

How do you approach digital and interactive in comparison to big agencies? Do you think with big agencies it has become a forced obligation?

Yes. I think Maged and I think digitally when a digital idea comes along. If not, then we don't. We are never forced to think digitally because we don't really have mandates or deliverables. We are never forced to make an idea digital, if it isn't inherently so. We just go to a client and tell them we're going to make you something really cool. If it works, they usually come back for more; if it doesn't they don't. No love lost.

What do you hope to see at Cannes next year?

A return for really good television, fewer business case videos with fake results and more fun ideas and silly executions; someone who has the balls to come out and ban agencies from entering ghost ads, thereby restoring the integrity of this once great festival.

What's the best piece of creative work around at the moment?

I love DirecTV. I love "The Most Interesting Man in the World" by EURO RSCG (but like really love it) - as in I watch the entire campaign every night before I go to sleep. I really wish I had done it and hate the people that did it. The work being done for Kayak is also great.

Is it true that in the wake of Egypt's January revolution, Elephant had no briefs to work on for some months? What did you got up to in this 'gap'?

Yes. We went without briefs for over six months. We didn't do much really, just sat around and played on the Xbox and I was going abroad every month or so to direct ads for other agencies. There wasn't much we could do. Facebook helped the revolution happen, so we shot a four-minute film for Coke that was a tribute to the Facebook 'Like' button.

What do you think Egypt's political situation in will mean for your work?

What else have you been up to?

Because business has been slow in Egypt, as of March of this year, I began to focus more on my global directing career. Since then, I've shot ads for Prague, Dubai, Milan, Dublin, and Beirut. I also won the Best Director at the Dubai Lynx for two years in a row. I've also recently been signed by Big Mama in Milan and DoppleGanger in Hamburg. Maged and I are looking to write a short film this year, hopefully shooting in December. And maybe take it to Cannes next year - the other Cannes.

Videos: Elephant put aside the client's idea for having celebrities in the ads and suggested prisoners instead. In Egypt, halva is often associated with prison and is the most common food for inmates.