We see former Manchester United and Real Madrid footballer David Beckham use his ball skills for advertising again, as Samsung releases a web video for the Galaxy Note mobile phone.

The video features the LA Galaxy midfielder recreating the melody of Beethoven's 'Ode to Joy' by kicking footballs against a 15-foot wall of drums.

In the spot, Beckham uses the Galaxy Note, which Samsung is positioning as a mobile and tablet computer hybrid, to plan the sequence of kicks needed to reproduce the familiar melody.

For the next 80 seconds the viewer is shown a various assortment of Beckham's ball handling skills before he finally completes the task by kicking the ball at a gong.

Cheil USA created the film, which is live on owned, paid and earned media channels, including Beckham's Facebook page, which has over 18 million fans. The creative team behind the ad included Creative Director Adam Wohl, Copywriter Leo Vladimirsky and Art Director Tom Morhous. It was directed by Jason Zada and produced by Tool.

This isn’t the first time we have seen Beckham’s footballing talents put to use in advertising. Diet Pepsi released a web video in 2011 (featured in Archive Vol. 4 of that year) featuring him on a beach in Santa Monica, Los Angeles doing trick-shots by kicking footballs into trash cans located at an impossible distance.

Filmed in the style of a passer-by capturing the footage on a mobile phone, the video went viral, with people debating whether it was real or in fact a web spot.

In an interview with Archive earlier this year, the ad’s Art Director Kristina Krkljus (TBWA\Chiat\Day), explained: “We had about ten minutes with him and the video is just the gift that keeps on giving.

"There were tons of videos that surfaced of people trying to replicate his three goals. The age range spanned from small children to grown men. This to me is a cultural phenomenon and I was proud to be a part of it.”

Of course, with the aesthetic qualities of Mr Beckham, his sporting skills aren’t always necessary for some of the non-sport related ad campaigns he features in. 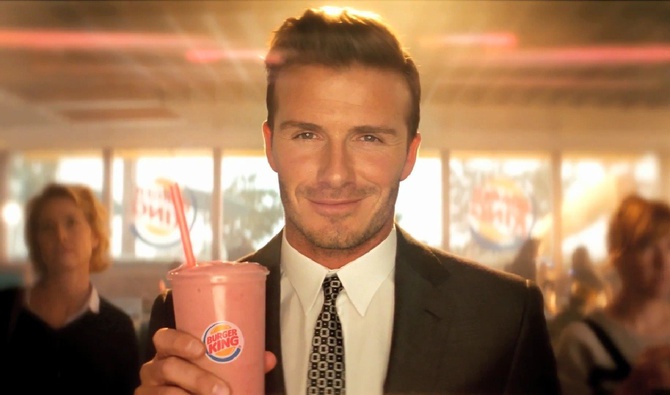 This year we have already seen him promote his new range of underwear in an in-house ad for global retail company H&M. The ad was aired during the Super Bowl XLVI and generated over 100,000 social media comments in the first 45-minutes and was one of the highest trending topics on Twitter.

As ambassador of the London 2012 Olympic Games, we are likely to see a lot more of him than usual.