El Ojo Iberoaméricano just wrapped up. From salsa veterans to dads in underwear - here’s a round-up of winners judged as some of the best creative work to come out of Latin America.

The Dads in Briefs campaign for BGH air conditioning won El Gran Ojo (the Grand Prix) in the audio-visual category of El Ojo de Iberoamérica.It made it as our Spot of the Week 2012/10.  In a region where many consider air conditioning a luxury, dads are all too comfortable in nothing but briefs. This series of commercials makes a compelling case for getting that AC installed.

Titanium: Hemoba “My Blood is Red and Black” by Leo Burnett Tailor Made, Sao Paulo

To raise awareness for the lack of blood in the state of Bahía, the popular soccer team E.C. Vitória removed the colour red from their jerseys to encourage fans to donate to Hemoba, the state’s blood bank. As donations increased, red began to return to their uniforms.

To encourage members of FARC to demobilise and spend Christmas with their families, messages were placed in brightly lit Christmas ornaments and placed in the rivers near known guerrilla fronts to help guide their way home.

To promote streaming platform Coke FM in Colombia, a concert was held with the band suspended 50K meters above the crowd. For every song downloaded by the crowd, the band came ten metres closer to being within view.

To help indecisive shoppers, C&A Brazil installed racks with hangers that would show the number of “likes” each item had gotten on Facebook, in real-time.

The print campaign for business magazine Mercado illustrates the complexities of the ever-changing world. The prints - one of which features as the banner image above - can be found in Volume 4/2012 of Archive.

Print: Save the Children “Vicious Cycle” from Young & Rubicam, Mexico

This compelling campaign featured in Volume 3/2012 of Lürzer’s Archive and demonstrates the sad fact that 70% of abused children grow up to become abusive adults. 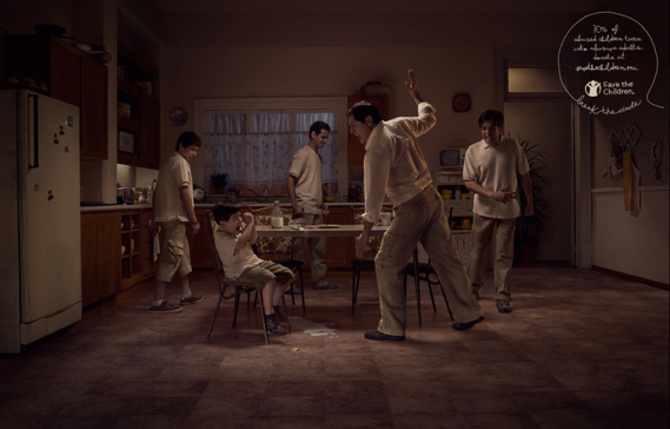 JWT, Puerto Rico’s “Most Popular Song” campaign for Banco Popular hired legendary salsa veterans ‘El Gran Combo’ to re-record it’s “I Do Nothing” which celebrated laziness, this time sending out the opposite message with uplifting lyrics to Puerto Rico – a country with half the population on welfare. The new version topped the country's charts.

Content: Toys ’R’ Us Spain “The Concert of Toys” by China, Madrid

To celebrate 20 years of Toys ‘R’ Us in Spain and remind families of the importance of play, the Madrid Metropolitan Orchestra gave the world’s first classical concert using only toys as instruments.

The bitter liqueur Fernet 1882 mocks the nervous habits of an anxious crowd by putting their manias on grand display while two calm observers watch the show as if it were a circus, contrasting the madness with the serenity of relaxing with a good drink.

Promo: Garbarino “Back to Garbarino” by Leo Burnett, Argentina

Doc Brown and the DeLorean make a crash landing in Argentina’s flagship Garbino electronics store, making it clear that the future’s at Garbino.