From musical manhole covers to Christmas light extravagazas – here are just some of the outdoor campaigns which have been recently dotted around the world...

Belgian mobile provider Base Check launched its new mobile tariff, including a free Spotify account and city guide app, with a world premiere: it gave young people a unique chance to make an everlasting impression on their city, by transforming them into their own six metre high holographic statue. The work was created by Belgian agency Duval Guillaume Modem. Musion London brought the hologram technology to the project.

To promote the Zurich International Radio Festival, TBWA\Zurich brought some fun to the city by taking the term “Underground” literally with their “Ambience” street poster campaign.

Art Director Frederick Rossmann, Andy Hostettler and the creative team came up with the idea of using perforated manholes as images for loudspeakers, and complementing them with prints of radios, plastering them right across Zurich.

If that wasn’t enough, they hung small transistor radios inside the manholes and let them play music, further emphasising the “Listen to sounds down under” slogan also printed on the radio images referring to one of the festival’s radio guests KISS FM from Melbourne, Australia. 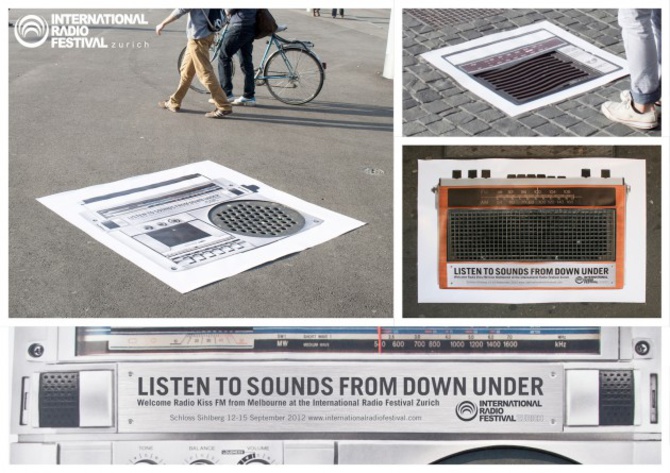 To promote its Gold edition, food spread brand, Marmite, has taken its “you either love it or hate it” slogan to Oxford Street in London – in the form of Christmas lights. Bit of a strange combination but there are some fun elements to the festive campaign from adam&eveDDB London. The interactive element means people can control the lights from a nearby bus stop and even have their face featured as by uploading their photo to the brand’s Facebook page.

German boys choir Wuppertaler Kurrende reminds us that a child dies every three seconds in this performance of Mad World for the International Children’s Fund campaign “The Lost Choir”. The song has also been released on iTunes. The work comes from German agency Grey Worldwide, Dusseldorf.

A 60m long table complete with 257 empty chairs sits as a grim reminder of this year's road toll. Each empty place remembers a life lost on Victorian roads. Tribute tweets and instagram shots were directed to #aplacetoremember. As the road toll rises chairs were added to the table. Over the time of the installation 6 chairs joined the table. 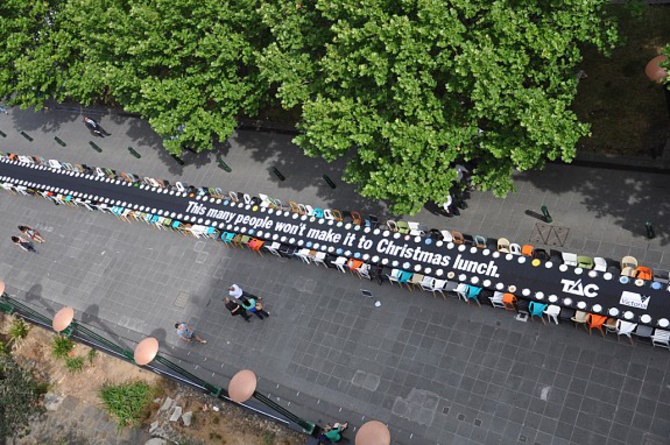