A bear-skin rug that becomes a movie director... ‘hot guys’  groping themselves to underpin the serious message of breast cancer – these are just some of the winners of TED’s ‘Ads Worth Spreading’ initiative. 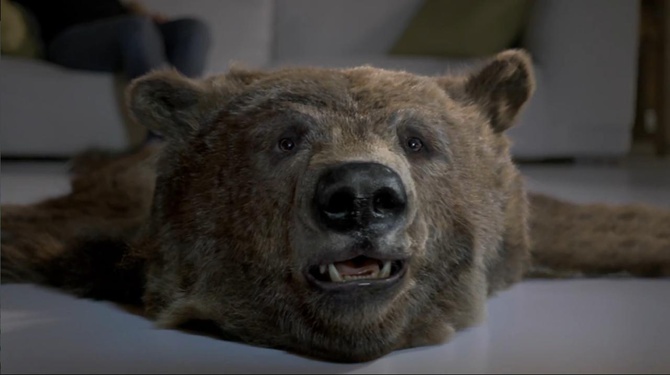 Image: Still from Canal Plus "The Bear"

The spots that people want to see and share. This was TED’s initiative to find companies that want to communicate ideas with their consumers with an ethos similar to the way Ted aims to communicate with its audience. Ads Worth Spreading’s challenge overview summed up a powerful idea as having “a life of its own; an idea can reset someone’s worldview and even begin a domino effect as they pass it on to friends.”

The ad could be as long as it took to communicate the idea powerfully, up to five minutes, whether it was through state-of-the-art animation, lush imagery or an individual talking directly to the camera. What mattered was the “a-ha” moment, the central idea.

TED received nearly 1,000 entries from 39 different countries and picked ten outstanding examples – some of which you may recognise.

“We had a huge variety of creative and unique pieces,” says TED’s Head of Global Partnerships, Ronda Carnegie.

“It was a challenge to narrow it down to just ten.  We were looking for online video that created new paradigms for advertising that told a story, exhibited brand bravery, and showcased creative wonder.”

Winners included “Your Man Reminder” for Rethink Breast Cancer by john st., Toronto – a tongue in cheek assertion that women are more likely to watch a video if it features a ‘hot guy’ underpinning the serious message of the ad, “The Bear” for Canal Plus (A French premium pay television channel) by BETC Euro RSCG, Paris, featuring a bear playing the part of a passionate director – complete with drama, moods and tantrums and “Start with Sharpie” by Draftfcb, Chicago, which explores the authentic and inspiring story of a Malaysian illustrator who uses marker pens to turn disposable coffee cups into works of art.

“It’s clear that advertising is often dismissed as an interruption to life but, the smartest, strongest ads become part of our cultural stories, influence our habits and inspire emotion.

“We’ve seen a lot of conversation around these ads.  The challenge was very well received by the press and the industry.  We are looking forward to continuing the conversation with the industry about what advertising can and should be as Ads Worth Spreading continues to evolve.”

Ads Worth Spreading began as a clarion call to the global advertising community in 2011, asking for ads that inspired and engaged audiences. In 2012, six nomination teams of two – made up of one renowned TED speaker and one rising star from the ad industry – sought out and nominated ads from diverse areas of interest: Talk, Social Good, Cultural Compass, Creative Wonder, Brand Bravery and Storytelling.

In addition, TED’S 25 Advocates from the ad industry made valuable suggestions and nominations, while TED extended an open invitation to agencies, producers and brands to submit their work through the initiative’s YouTube channel. TED found this approach yielded a wealth of online video that they may not have otherwise been exposed to

However, this was different from an award show. The ads chosen were reference points meant to reflect the best of advertising today and help others life their game by rising to an industry-wide challenge.

“We feel that TED has a lot to share about “idea-driven” storytelling and we think the industry is taking notice of our leadership in that area,” says Ronda.

“We look forward to more innovation and conversation around the idea-driven concept.”

See the other winners on TED Ads Worth Spreading