EPIC SPLIT'S UNSUNG HERO IS NOW STAR OF THE SHOW

The real unsung hero of Volvo’s “Epic Split” is now the star of the brand’s new campaign by Forsman & Bodenfors. 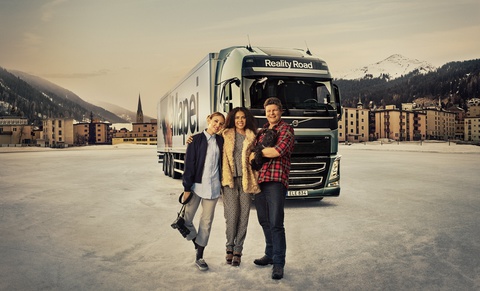 Volvo Trucks’ award-winning “Epic Split” is still fresh in people’s minds, and was the most shared video of 2014. Now Swedish agency Forsman & Bodenfors is back new video series completely different from the Live Tests Series of 2013.

“Reality Road” does, however, feature one of the main forces behind the Epic Split, a man of simple pleasures called Jens Karlsson, who actually drove one of the trucks in ad starring Jean-Claude Van Damme.

Jens features in the reality TV campaign with the artist, Mapei. During a nine-day road-trip through Europe, she has recorded a new music video with director Liza Minou Morberg. To help them, they have a Volvo truck filled with props with a very skilled driver.

“With Reality Road we want to show the strength of our service offerings,” says Per Nilsson, Director of Public Relations Volvo Trucks. “For a truck to stay on the road, the services that are linked to it are just as important as the vehicle itself. At the same time, we want to produce TV entertainment that attracts a wider audience. As far as I know, no other company has used reality TV for marketing purposes,” he says. 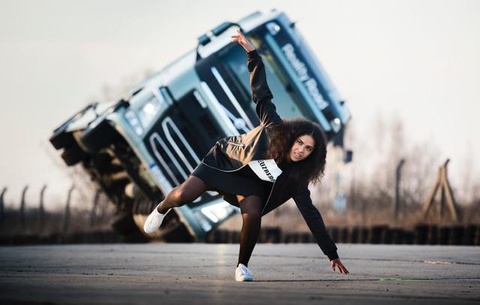 Accompanying Mapei, Liza, and Jenz is miniature schnauzer Sushi and a specially designed Volvo FH. Over the course of nine days, they travel all the way from Sweden to Italy, a journey of more than 4,000 kilometres. “Million Ways to Live“ -  the song in the music video - will be included in Mapei's forthcoming album, to be released this autumn.

“I love to travel and to have the opportunity to meet new people and cultures. And that is also what “Million Ways to Live“ is about – being on the road and having the freedom to travel. It is the ultimate song for a road trip,” says Mapei.

In addition to seeing Volvo Trucks’ services being put to the test in various ways in the TV series, you can follow Mapei as she gets acquainted with and challenges the trucking world. Among other things, we see her when she performs with drag show artists on a truckferry to Poland, arranges a spontaneous gig in the suburbs of Paris, or accompanies a two wheel stunt in Berlin.

The series comprises a total of eight episodes, which will be published on Volvo Trucks’ YouTube channel.