With CGI that wouldn’t be out of place in a Hollywood epic, Audi’s exhilarating spot makes sure bad mechanics keep their hands off the brand’s cars.

This exhilarating German commercial for Audi takes advantage of a special effect pioneered in the film World War Z (starring Brad Pitt). In this case, massing zombies and live humans are replaced by mechanics chasing the advertised Audi.

The 60-second spot by Berlin agency, thjnk, gives us a dramatised look at how mechanics feel about servicing Audi’s cars.

With the tagline “So your Audi doesn’t fall into the wrong hands” the commercial stages a good versus bad scenario in epic fashion, starting off by showing a sleek Audi riding through the fog to the sound of ominous strings. Anyone familiar with horror flicks will recognise this as a cue for something sinister about to unveil.

As the car passes workshops and garages, a herd of independent mechanics look up and take on fairly zombie like characteristics; it’s obvious they like the look of the car. A close up of the Audi’s dashboard show the words ‘service due’ and that’s where things really get messy: the zombie-like mechanics start chasing the car en masse, stopping at nothing to get their hands on the motor.

“Mechanics” was directed by Sebastian Strasser of Radical Media, featuring special effects that make the hordes of greasy and overall-clad bodies resemble a flood as they fall over each other. We see the car escape and drive into an Audi dealership for its official service – free from the hands of the evil grease monkeys, who have gathering in a massive heap outside the service centre.

On the message behind the ad, Berlin agency thjink says that Audi’s famous ‘Vorsprung durch Technik’ motto is a promise that doesn’t end with Audi in the development and production of a new car. “The standard of the brand also applies in the everyday life of the customer: the service.”

Silke Miksche, head of marketing communications for Audi Germany, adds: "The subject of 'service' is of tremendous importance both for the customer and for us as car manufacturer and our dealerships—and yet it has so far not been the focus of our communications. We tell the subject in an unexpected way - emotionally, spectacular, epic. In other words, this is truly big-screen cinema."

Not sure if it does much for the reputation of mechanics, but it’s definitely an entertaining 60-seconds. 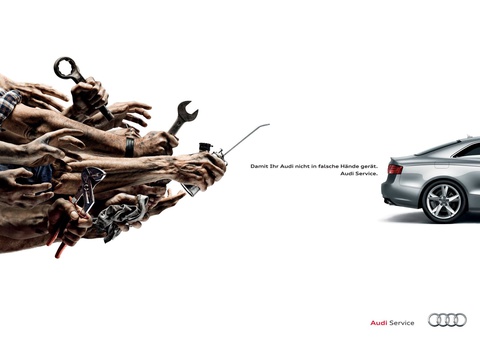