GOPRO GETS UP CLOSE WITH A PRIDE OF LIONS

Animal behaviourist Kevin Richardson, better known as “The Lion Whisperer,” play-wrestles with lions and hangs out with hyenas. 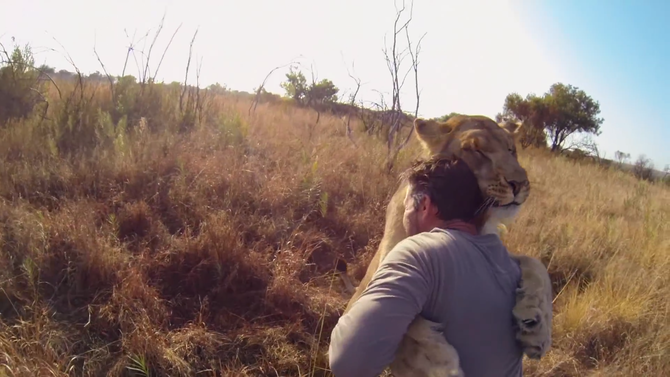 And you thought you had a wild weekend.

Since October 2013, an extraordinary video with first-hand footage has been making the rounds online. It features Kevin Richardson brazenly standing in the African savannah calling out, and then standing calmly as two adult lions come running up and lovingly wrap their enormous paws around him.

Incredibly, we see the trio cuddle in the high grass, as Richardson – who is wearing a tiny GoPro camera – ruffles their fur and scratches their foreheads.

The animal behaviourist from Johannesburg has been accepted into several lion prides and clans of spotted hyenas since he began working in the field 16 years ago.

“Lion Hug” is the fifth episode of the “HERO+ Adventure Series” branded content which promotes the line of cameras from GoPro. The brand of high-definition personal cameras has become popular with extreme action video photography.

The GoPro production crew joined Richardson in the wild reserve in Pretoria, South Africa. Every bit of the stunning footage was captured on the HD HERO3+ camera.