HelloFlo hilariously spills the secrets about what really happens after childbirth in their Postpartum “Musical”. 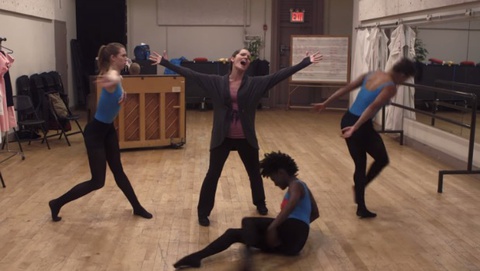 HelloFlo, a customised delivery and subscription service for feminine care products, has created a hilarious commercial to promote their "new mom kit". The survival box is filled with everything from nursing shirts to nipple balm.

Last month, the brand leaked a trailer for “Postpartum: The Musical” and announced that they’ve been working on their latest video over the past few months – vowing that their brand celebrates “the full spectrum of a woman’s life.” And as we all know, sometimes it can get a bit messy. 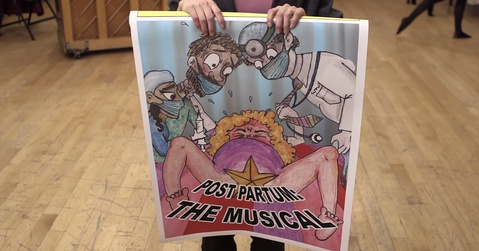 In the video Leah Curney plays a mother called Mira, who sings us through the “terrifying abyss of motherhood” through a promo for her musical, fuelled by leotards, piano-chords and jazz hands. In a faux docu-style approach, we hear of all her trials and tribulations as a mother in postpartum - some of which will make you cross your legs and wince.

Company founder and CEO Naama Bloom worked with production company Senza Pictures and writer Sara Saedi, who wrote the spot and originally described it as Waiting for Guffman-esque.

It is the third video from the brand and follows the popular menstruation-themed "Camp Gyno" and "First Moon" spots, which were both created by copywriter and art director duo Jamie T. McCelland and Pete Marquis.

The first told the story of a young girl who got her “red badge of courage” during the summer and became the insufferable self-styled “Camp Gyno,” delivering graphic menstruation demos with a doll and handing out tampons almost as if they were drugs. It even used the word vagina (gasp!) which few feminine care brands dare to do.

HelloFlo soon bursts her bubble when camp members start receiving their care packages through the mail. The spot has had 8.9 million hits, but its successor was “First Moon Party” (a former Lürzer’s Archive Spot of the Week) which has had 30.1 million YouTube hits over 8 months.

In the online hit, a young woman tries to keep pace with her friends by faking her first period, using some glittery handiwork involving nail polish. What she doesn't count on is just how far her mother is willing to go to expose the lie. The resulting First Moon Party turns the affair into a celebration of humiliation, complete with a ‘Vagician’ and ‘Pin the Pad on the Period’.

The audience for Postpartum: The Musical is more narrowed than Camp Gyno so we don’t expect it to enjoy the viral success of its predecessors, but it still demonstrates a brand that really can relate to its market.

“As a mom of 2 young children who had a c-section and a VBAC (vaginal birth after c-section) I can honestly say that I’ve personally experienced everything that Mira, our main character, sings and talks about,” says Hello Flo’s CEO and founder Naama Bloom on “Postpartum: The Musical”.

A 25-second poetry recital - complete with bongos accompanies the video.

“Childbirth is beautiful but it’s messy," adds Bloom. It doesn’t matter how you deliver – your body transforms and it needs time to recover. But, as parents, we so rarely spend time on ourselves and our recovery.  We’re too busy worrying about our new babies.

“I hope this video will resonate with you, make you laugh, and inspire you to have open conversations about your body and your health.”

Postpartum shows the growth of HelloFlo, which like other startups used the production company as agency model to launch their brand (in HelloFlo’s case, production company Hayden 5). Other well-known examples of this model include DollarShaveClub.com's cheeky promo “Our Blades are F***ing Great” (2012) which had over 1 million YouTube views in just four days, and GoldieBlox’s “Princess Machine”.