How Ballantine’s created the first whiskey glass engineered to work in microgravity.

The conquest of space might not be in everyone’s grasp, but Scottish distiller Ballantine’s has developed a glass for sipping whisky in zero gravity if you ever make it there. One common complaint by the International Space Station crews is the lack of anything Earth-like in their environment – like having to drink fruit juice through a straw out of a plastic bag.

To address this, Ballantine’s commissioned an Open Space Agency team led by James Parr to create a glass that would help ensure that in the future of space travel, whiskey will be going along on the ride. The Ballantine’s “Space Glass” was recently launched after it was engineered and prototype-tested in microgravity at the ZARM Drop Tower in Bremen, Germany. 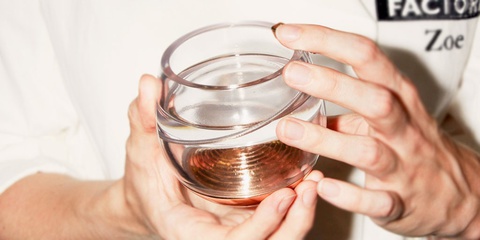 The curved shape of the space glass is designed to fit in the palm of your hand with a weighted, rose gold base giving it a heavy feel here on Earth - the effect is obviously negligible in microgravity.

“Gold is often used in space technology as it deflects the radiation of the sun, but in this instance it’s highly unreactive properties serves to prevent the glass from affecting the whisky’s taste,” explains Ballantine’s. “The rose gold colour is also reminiscent of the copper used in the whisky distillation process, a nod to our rich history.”

The Open Space Agency’s James Parr led the design and build of the glass, which could herald a new era of open-source space design and a landmark for the future of whiskey.

“It was important that we focused on creating a ritual around how you drink from the Ballantine’s Space Glass to ensure a familiarity of what we are used to here on earth — the end result is one with several elements to that ritual, from the liquid entering the glass through to sipping from it, says Parr.” 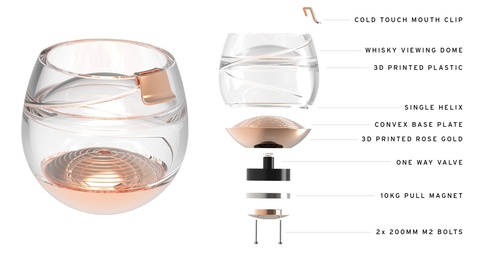 The design features of the glass include a spiral convex base gold plate which creates surface tension to hold the whiskey down in a reservoir at the bottom of the glass. Connected to this reservoir is a helix and a small channel runs up the side of the glass to carry the liquid up to the rose gold mouthpiece, where the liquid waits for the space traveller to drink it.

Included in the base of the glass is a 10kg pull magnet for easy docking with a bespoke whiskey insert nozzle, for putting the glass “down” on a metallic microgravity bar or even on a wall. The custom loading nozzle inserts into the one way valve situated on the base of the glass and subsequently solves the problem of pouring in microgravity conditions. This allows whiskey to seamlessly flow into the glass from a standard bottle of Ballantine’s Finest — meaning no spillage.

“We are using inertia and the notion that the whisky will stay at rest while the bottle and the glass is moved around the resting liquid,” explains Parr. “Motion one pulls the whisky into the base of the glass, then motion two is to roll the whisky in your hand and let the heat transfer through the metal base into the liquid itself. Step three involves then moving the glass down prior to moving your nose into the space where the vapours are resting. The final motion is to move the glass upwards to capture the liquid in the base plate and let it enter your mouth.”

Ballantine's went to the ZARM Drop Tower in Bremen, Germany to test the surface tension and discover how whisky behaves in microgravity

Ballantine’s has also explored 3D printing as the future of mass manufacturing, saying that the obvious benefit of 3D printing is that it is future-proof. There is currently a printer on the ISS making it an obvious method to manufacture products in space.

“One of the challenges of using plastic is that you lose the premium feel of glass or crystal. The Ballantine’s Space Glass negotiates this by including a Rose Gold mouthpiece, which still gives you that evocative, cold touch on your lip as you drink. It is also the key indicator to guide your mouth to the top of the helix,” says Ballantine’s.

The brand has even created a special blend of whiskey to work with the conditions of space.

“In space, you do not experience the sense of smell and taste with the same intensity as you do on earth,” explains Sandy Hyslop, Ballantine’s Master Blender.