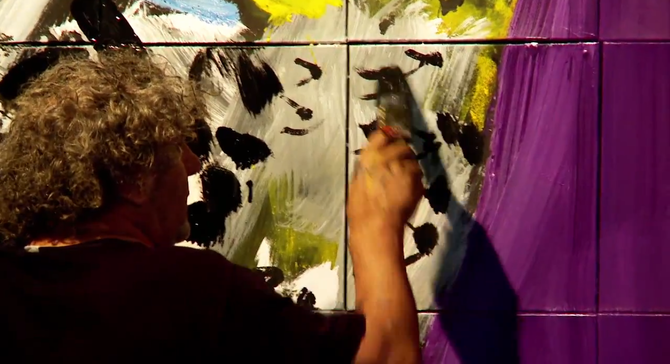 Argentinian football team Club Atlético Boca Juniors represents a unique spirit and passion that goes beyond sports. Nike’s new project aims to encourage the club to become a leading character in different fields - by putting Boca´s own culture along and its journey through the lens of the renowned artist Carlos Regazzoni.

The international artist, inspired by the distinctive blue and gold jersey design, created an installation to reflect the Boca spirit on a wall measuring 40x10 feet.

Regazzoni created the mural using the boxes containing the first 306 Nike jerseys of the new kit for the Summer Soccer Tournament. On the lids of the boxes you can see the image of Buenos Aires’ “La Bombonera” stadium, in stroked of the new purple colour.

Once the installation was over, it was divided into 306 unique pieces, identified by a single number next to the artist’s signature.

Inside the boxes, and together with the new Boca Juniors jersey, four postcards designed by the artist were included: One telling the soccer club history, two giving an account of the inspiring sources and techniques for doing the artwork, and a fourth one referring to the features of the limited-edition Summer jersey.

“My goal was to reflect something iconic - an aerial view of La Bombonera stadium with its people. I wanted to express the pride of the soccer fans”, says Regazzoni, who is himself a fan of the club.

“When they proposed that I should create and paint a packaging design for the new Boca Juniors jersey, the first thing that came up to my mind was the following: Let’s develop something iconic. “

Regazzoni described the piece as including the “Bosteros” – the name given to supporters of the Argentine football club. The term actually translates as a generic insult (literally meaning manure dealers).

As part of Nike’s “disruptive” campaign, they generated buzz by incorporating purple in the design, verring away from just the traditional blue and gold.

“Nike’s idea of changing the colour of the jersey seems bright and fantastic to me. No doubt, this is a great challenge. Everyone knows that Boca Juniors jersey is yellow and blue; but now the time is ripe for a change, there are young people claiming for and deciding on such change”, says Regazzoni.