Nike gets choreographic in the Atlas mountains for Pedro Lourenço collection

Nike gets choreographic in a brand film for NikeLab, a gravity-defying collaboration in the Atlas Mountains. 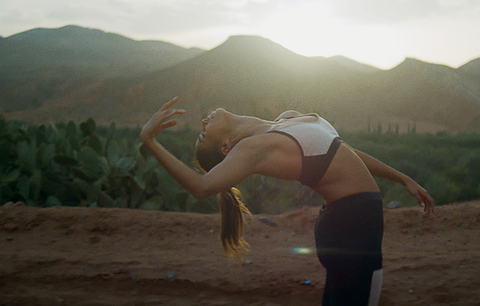 Directed by Somesuch’s Abteen Bagheri, the short film focuses on a female dancer and is set to Jessy Lanza’s ‘As If’, with Music Supervision coming from MassiveMusic London.

The film, which is three and a half minutes long, celebrates an eight-piece collection from Nike, who invited ‘technical couture’ Brazilian fashion designer Pedro Lourenço into the fold to create the sport behemoth’s first women’s training apparel collaboration.

The Sao Paulo designer, who looked to contemporary art for his SS15 ready-to-wear collection presented last month in Paris, has created a clean and simple collection and taken elements of Oscar Niemeyer in his work; the mixture between organic and graphic.

To channel this spirit, Nowness commissioned a film and collaborated with filmmaker Abten Bagheri, who has created music videos for A$AP Rocky and Blood Orange, heading to Morocco’s Atlas mountains to create the promo film.

The ethereal, electronic score is by Jessy Lanza, known for her blazing show performances with Beyoncé and the branded content features French dancer Hajiba Fahmy’s, who glides with ‘hyper physical movements’ throughout choreographer Aaron Sillis’s day to night routine.

“There’s a naturalistic movement to it. From the walking to the workout to the running and elevating. We’re using dance to heighten the feeling of a release.”