From old razors that come to life to Banksy’s dismal Disney parody – check out the latest ads and installations doing the rounds. 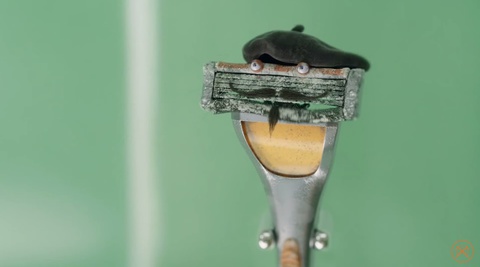 The ad is part of a series of spots built around the concept that some razors are so old, gross and overused that they come to life - until Dubin shows up to inform their petrified owners of the affordable, mail-order options open to them by Dollar Shave Club. Others in the series include “Jacques the Filthy Razor,” “Tub Terror,” and “Razor Escapes”.

This Nike ad for Korea by Wieden+Kennedy Tokyo highlights young people defying traditional expectations and invites young athletes to share their personal stories through a tie-up with popular messaging app KakaoTalk – where young people will be encouraged to record their “Just Do It” stories in their own voices. The spot addresses the family, societal and academic pressures that young Koreans can face.

“Play Loud” stars Lee Young-Pyo, a Korean football legend, who plays multiple naysaying characters through the film. In classic Nike form, the actions of the athletes on screen defy his assertion that “sport is a waste of time”.

Now for a dystopian theme park from none other than Banksy. The clandestine artist’s “Dismaland” bemusement park opened in August in Tropicana - a derelict lido in Weston-super-Mare, England.

Described as “a festival of art, amusements and entry-level anarchism” Dismaland is a parody of Disney’s flagship theme park resorts, repackaged as a family day-out that’s unsuitable for children. Visitors can expect to find a dead princess and Banksy's trademark dark humour.

Whether or not Manchester City is your team, all sports fans can appreciate this beautifully directed ad for Telenet. “Here’s to you, Vincent Kompany” is a short film from Belgium directed by Joe Vanhoutteghem for TBWA Brussels which explores the titled Belgian player’s relationship with the football club’s twelfth player - the fans.

Made up of dialogue to backdrops of Manchester City’s stadium and the streets where fans live, the spot shows the warm side of the football fandom, rather than the negative behaviour we’re so used to being shown in the media.