“The Whole Story” tell the story of a friendship between a little girl and her pet dog, which she has to leave behind when the family goes on holiday. One follows the girl's story and the other follows the dog's story - in the beginning and end both films overlap. 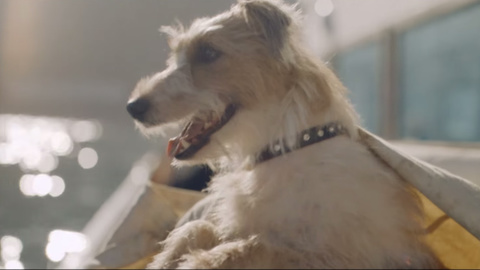 HomeAway, a vacation rental marketplace, is celebrating its 10th anniversary. Their thirty-second TV ads tell the two halves of a heartwarming story.

“The Whole Story”, involving a young girl and her beloved dog. Emma feels incomplete when her dog, Biscuit, isn’t brought on the family holiday. The first ad is told from the perspective of Emma, whose family travels to a rental property. Emma and her parents join the grandparents and cousins at a beautiful country home.

Instead of having fun, however, she spends most of the time pining for Biscuit. Little does she know that back home – shown in the second ad - Biscuit has embarked on an epic journey to track her down and reunite. Set to the sound of Natalie Prass’ “It Is You”

The tagline is: "The whole house. The whole family. A whole vacation" and demonstrates the pleasures of getting away while having the space to accommodate everyone in the family – including the four-legged members.

The spots were created by Saatchi & Saatchi London and directed by Martin Krejci of Stink.

“The changing dynamics of families is a driving force behind HomeAway’s campaign and platform,” says Katrien De Bauw, Chief Operating Officer of Saatchi & Saatchi London. “Millennials’ buying power is growing, kids are more informed and opinionated on travel than ever, and the word ‘family’ has expanded to include groups of friends. The goal is to connect with these influencers and bring them together.”

The digital elements of the campaign, including the main HomeAway website, as well as its social channels, will show five different 360-degree family scenes at HomeAway properties to demonstrate both modern families and the “excitement and experiences that can only take place when the group is together in a vacation rental.”