An Amsterdam based coffee brand has conducted a taste test with cannabis.

Studies suggest that your sense of smell and taste are heightened when under the influence of cannabis, so Amsterdam-based coffee brand Moyee has launched a provocative campaign called “Under the Influence”.

Creative agency 180 Amsterdam created the campaign, which has a simple premise: take a broad spectrum of Amsterdam’s cannabis smokers, invite them to taste-test Moyee coffee, and, while under the influence, document their eloquent and surprising responses.

The result is a two-minute film, appropriately titled ‘Under the Influence’, which includes a glamorous older woman stating: “I equate coffee drinking with sex. And a horse.” and a young ‘hipster’ man, describing Moyee coffee as, “Round. Not triangular. But definitely wavy.”

The film was shot in an interview style, using real people, by 180 Amsterdam, who is working with Moyee to build its FairChain brand through radical and provocative activations.

The strategy behind the campaign was to create something uniquely Dutch and provocative, that demonstrated the great taste of Moyee and its ideological agenda, whilst avoiding the usual clichés that surround taste tests.

“We wanted to put our coffee to the taste test, but normal taste tests are so, so boring,” says the brand. 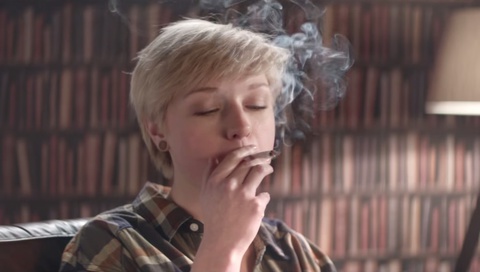 “And just to be crystal clear, we're not promoting cannabis here. We're Dutch, and we grew up with the stuff, but we understand it's the topic of global debate with heated opinions either way. We simply thought this was just a hilarious way to draw attention to what we think is the single most important movement in coffeeland - FairChain!

“So even if you don't agree with our humour, please don't disagree with our hearts. Coffee is the world's second most valuable commodity after oil -- don't for a second think a coffee revolution can't change the world!”

With over 150 legal ‘coffee shops’ in Amsterdam, the agency and brand decided that it was a great opportunity to utilise the powerful effects of cannabis as a way to celebrate great tasting coffee. And a good way to put Amsterdam on the map for its coffee – not just its cannabis.

“Cannabis may be tolerated in Holland, but it remains a sensitive topic here. You could even say that, by legalising cannabis, Colorado and Oregon have out-liberalised Holland. “Under the Influence” is our playful way of tapping into the public debate.”

Al Moseley, President and Chief Creative Officer of 180 Amsterdam, adds: “We put this theory to the test and found the results were compelling. It’s a more radical take on the taste test for a brand that isn't scared to create debate.”