A man who thinks he’s a train. Plus a Japanese girl climbing the wall of her school.

From a man who thinks he’s a train to a Japanese girl climbing the wall of her school – check out our roundup of spots from around the world. 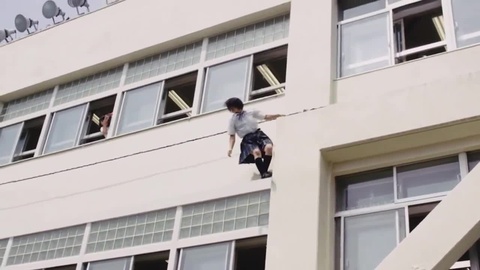 NTT Plala Mobile’s ad by Tokyo agency AOI Pro shows a typical looking Japanese high-school girl who suddenly realises she is late for class and decides to take the fastest way up – climbing up the school’s building and into the classroom.

The ad has racked up over 2.2m hits since first airing in August. The ad is titled “Japanese high school girl who is late for school take the surprised way...!!!” which sounds like someone pasted it out of Google Translate – but you get the idea.

For this charming Airbnb spot, TBWA/Singapore used an old animation technique to create a spot aimed at the Asian market. “A Different Paris” tells the story of a young woman reminiscing about her last trip to the city and the invaluable advice and experience her Airbnb host provided to get away from the tourist version and closer to the real Paris.

The one-minute spot was crafted using a huge zoetrope – one of the earliest tools of animation that goes back to the 19th century, of which a 3D version was famously used by Japanese animation studio, Studio Ghibli.

Model and miniature set specialists Yippee Ki-Yay, Photoplay Film, and Six Toes TV collaborated to build the zoetrope. The device took carpenters 100 hours to assemble from scratch. There are 11,256 assembled parts, and painting the miniature models and backgrounds took 648 hours. It took 84 meters of electrical wiring and 30 meters of strip LEDs to get the giant structure moving and lit up. The behind the scenes film is worth a watch too. 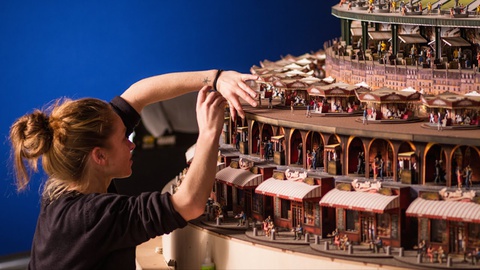 DIY store chain Hornbach’s new ad ensues the brand’s usual madness and sense of humour to show what happens when people from different cultures single-mindedly follow their own aims, without communicating or working together.

Their common construction project, “the world”, falls apart in front of them all. It is represented by a huge, rickety house made up of countless parts in different styles and built using different methods. After the house collapses, they start from scratch together. The spot revolves around the often-quoted Hornbach slogan “There is always a job to be done.”

“It was important to us not to pass judgement, but instead to present the broader meaning of the slogan with humour and charm,” says creative director Guido Heffels, of creative agency Heimat. “Showing such a large number of ethnicities and cultures in an advert is almost revolutionary in the context of a German commercial break. Normally non-western characters are shown in a clichéd, almost caricatured way, if at all.”

We’ll leave you with a tickler from the UK. Directed by Ringan Ledwidge “I Am Train” for the Trainline app is a brilliant spoof of corporate advertising. We are introduced to Train Man, who knows all the tricks and cheats to stay ahead of the crowd at train stations, and who pays less than other passengers because he books ahead with Trainline.com. From London agency Anomaly,  it builds masterfully towards the ridiculous pay-off.