Lingerie brand Agent Provocateur lets us indulge in yet another spot of voyeurism in its new campaign which promotes its new Autumn/Winter 2012 collection. 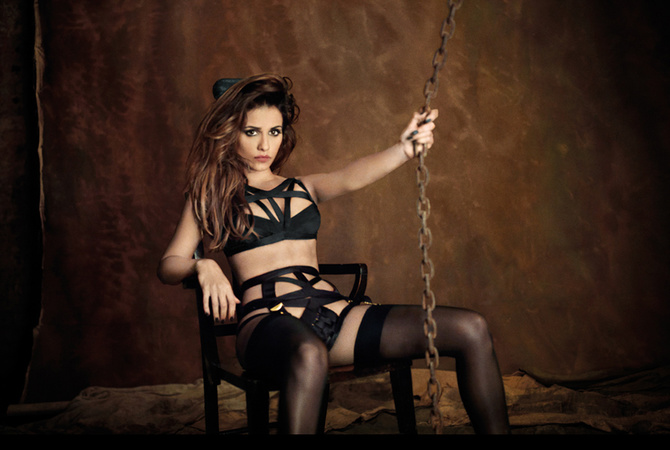 Step forward Mónica Cruz who is the face (and body) of the campaign and stars in Black Label Productions’ glamourous “Wilhelmina: Show Your True Self”, in which a prim and enigmatic lady's scantily-clad spirit is revealed by an enchanted camera.

The video has a Neo-Gothic feel, inspired by Victorian London and was shot in London's House of Detention, an eerie and damp decommissioned prison located in Clerkenwell. The actor and dancer (and sister of actor Penélope), clad in a white, lacy gown, steps in front of a Dickensian-style character's camera for her close-up. But through the lens Cruz transforms into a seductive vixen, gyrating upon chairs and chains clad in Agent Provocateur's racy new collection.

"Well, that's never happened before," gasps the photographer, to which Cruz simply responds with a coy "Really?"

Tim Pope, who has created music videos for Iggy Pop, Paul Weller and The Cure, directed the film, which helps explain the choice of soundtrack (Iggy Pop “Dirt”).

Cruz, who starred alongside her big sister Penelope in ads for fashion retailer Mango in 2008, was handpicked by the brand's creative director Sarah Shotton.

Video: “Wilhelmina: Show Your True Self” by Black Label Productions.

“I wanted it to be romantic Goth, so it’s quite dark but quite beautiful.

“It’s nostalgic but true to the brand in dark shades of red and purple. It’s set in a Gothic underground space, brought alive by Mónica’s frenzied and fantastical performance. Mónica is a beautiful embodiment of the Agent Provocateur brand, knowingly sexy and empowered by her own sensuality,” said Shotton.

Shotton was also creative director for “Fleurs de Mal”, a short film for the brand’s Soiree lingerie whose launch coincided with Halloween last year, which appeared in Lürzer’s Archive Vol. 1/2012.

See our Editor’s Blog for a discussion on brands like Agent Provocateur and the feminist implications of creative advertising. Let us know your thoughts on our Facebook page.