Amnesty International’s hard-hitting new campaign gives examples of why the NGO does not accept money from just anyone.

Graphic scenes of human rights violations unfold in the spot by TBWA\Paris as we see victims of torture, capital punishment, civil war and other atrocities literally covered head to toe in bank notes, as a powerful statement of how easily crimes against humanity are silenced.

“Independence” aims to promote Amnesty International’s stance of refusing government and multinational donations on the principle of zero indebtedness. The commercial, which also features as our Spot of the Week 2012/21, is accompanied by print ads with the headline: “We will never let money hide reality from us.”

“Talking about money is a new subject for Amnesty International," explains TBWA\Paris Art Director, Phillipe Taroux, and Copywriter, Benoît Leroux. “The concept was to oppose 'money that hides' for 'money that reveals.'"

“The money that hides, is that of multinationals and governments who use all their financial power to hide the truth, their abuses, embezzlement and crimes of all kinds - hiding child soldiers, covering up pollution in India or in the Niger Delta, torture, assassinations of opposition figures, journalists, etc.

“Faced with this dirty money there is that which allows donations to unmask, bring out the truth, inform and act. The commitment of each one of us can really make a difference.”

Actors were used (some cast in the local area where they filmed over two days in Casablanca, Morocco) to depict violations that occur around the world.

“There was a multitude of human rights violations which (unfortunately) gave us a lot of choice. With Amnesty, we privileged those which were most iconic and explicit for people. The choices were hard because there are so many that we would like to denounce: evictions, child labour, etc.”

“In the end, we chose five of them: freedom of information, which is flouted in so many countries both in Europe and overseas, where journalists have paid a high price; ecology - pollution by corporations that deny the rights to live in safe housing and a safe environment; the death penalty - against which Amnesty International has led a long struggle with very large strides in recent years; torture, which is always present and in practice in countries self-proclaimed as “democratic”; child soldiers - a fight aimed to eradicate exploitation of vulnerable human beings.”

The production team, Henry de Czar, including director Joe Vanhoutteghem and director of photography, Sebastian Blenkov, worked with a very small budget. The scenes were shot a few yards away from each other, with the death penalty and torture scenes being filmed within the slaughterhouses of Casablanca.

Director, Joe Vanhoutteghem explained the importance of getting every detail right: “This was actually one of the most intense shoots ever. I've done a lot of public awareness before, with no money, but those were never projects to this extent.

“My producer Delphine went shopping to a flea market with the stylist and even found the young man who features in the torture scene amongst the friends of one of the extras. She persuaded him to do it and he was really amazing.”

The spot itself, does not have any dialogue and is set to the lyrically powerful and aptly entitled song “Atrocities” by Antony and the Johnsons.

Image: Still from the hard-hitting torture scene in "Independence".

“Of course we couldn't buy this song and the great thing was that Antony Hegarty wanted to see the film first before his approval,” says Vanhoutteghem.

“All the agony, pain and emotion from his work suddenly sounded even more sincere. I wish this could happen more often. When you want to use music for a film most of the time you just pay big money - whatever your film looks like. I've seen a lot of good music spoiled on commercials and I always wonder if the artists are even aware of it.”

Recreations of bank notes were worn and glued one by one onto skin and garment for each scene, despite the weather vagaries.

“Legally, the money was not a simple thing to show,” explains TBWA. “We had to recreate bills as realistic currency, even down to the paper properties - a work of craftsmanship from artist, Agathe Tremouille.”

This is not the first time TBWA\Paris has done campaigns for Amnesty International.

“It is a privilege to combine professional and personal beliefs. Amnesty is not a "client" like any other,” says TBWA. “The product is human rights.

"It’s great to be involved and make these campaigns possible.

“Most of our campaigns have been followed up by positive results. “Bars” led to the release of an opponent in Congo, and “Death penalty” has led to a moratorium at the United Nations against capital punishment.” 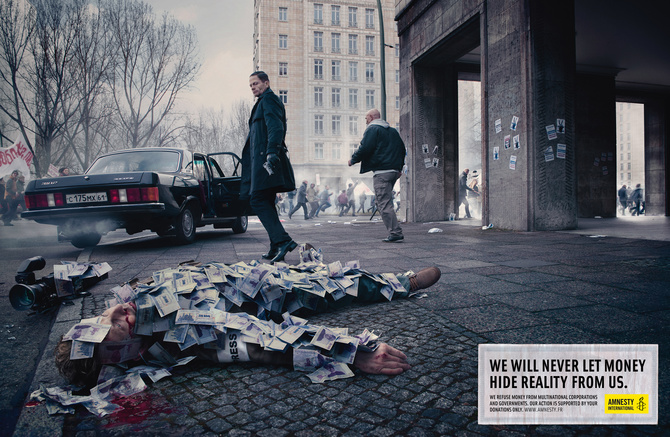 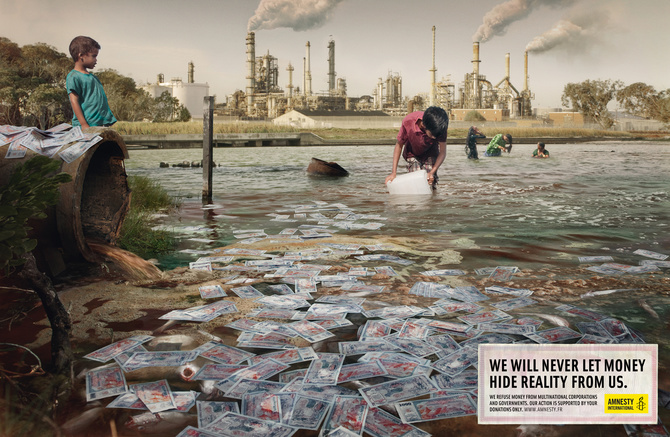 Images: Amnesty International "Journalist" [top] and "Pollution" as part of the "Independence" campaign.