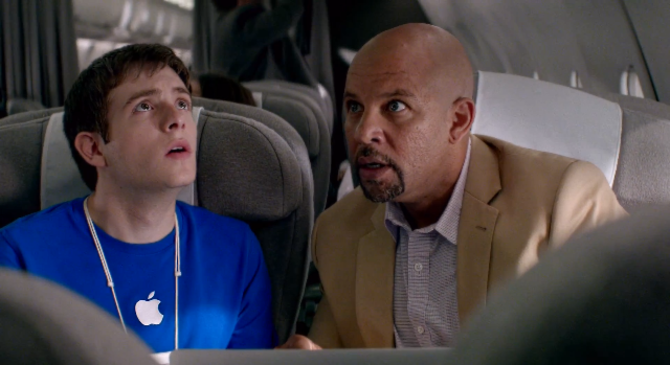 Apple’s latest commercials, part of a campaign that focuses on the Mac, were aired during NBC’s coverage of the Olympic Games. The spots are drastically different to the style Apple has previously used in its television ads for products like the iPad and the virtual assistant ‘Siri’.

One ad features a man on a plane receiving emergency assistance from a Genius (the name given to Apple staff who give in-store technical support) on making a last minute anniversary film for his wife using iMovie on his Mac.

Another ad features a conversation between the Genius and a customer who has just been tricked into buying “basically a Mac” (this particular spot drives in the message of just because the laptop looks like a Mac, it doesn’t mean it comes with all the features of a Mac).

The third in the series of humorous spots aired during the opening weekend of the games shows a scene in which a frantic dad-to-be, whose wife is about to go into labour, knocks on the door of the Genius at 4am needing help making photo cards and books using Apple’s iPhoto feature.

But the spots by TBWA\Media\Arts Lab, which take a very different stance to slogans such the iPad’s “You already know how to use it” campaign, have had a mixed reaction from critics.

Mashable criticised the ads saying: “The Genius helps technologically inept acquaintances understand how simple it is to use the product they’ve recently purchased — but the humor misses the mark. Instead of showing the simplicity of the operating system, they seem to be emphasizing the ineptitude of those who do not know how to use the machine.” The tech site also picked up on the fact that the ads have stopped running during the Olympics.

Former Apple creative and Chiat\Day guru, Ken Segall, even took to his blog to critique the new spots, writing, “these ads are causing a widespread gagging response, and deservedly so. I honestly can’t remember a single Apple campaign that’s been received so poorly.”

Tell us what you think of the ads on our Facebook page | See Apple campaigns featured in Lürzer’s Archive here | Not already subscribed? Subscribe now.