5 ADS THAT ARE GUARANTEED A REACTION 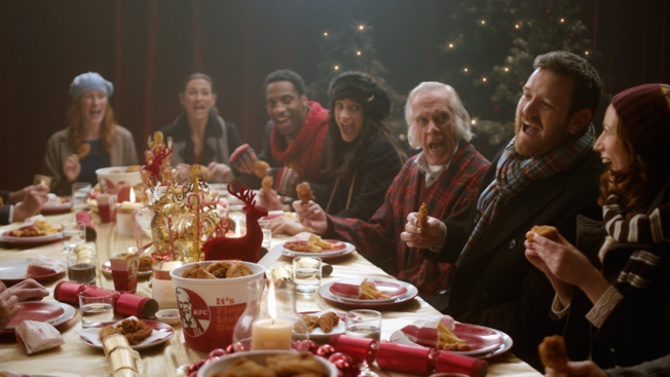 Yuletide foes become friends over KFC in this soppy, grand spoof of an ad titled “The Taste That Unites” by BBH London and Biscuit Filmworks. The two and a half minute extravaganza, described by BBH’s David Kolbuszsch as a “schmaltzy, sugar-coated song" culminates with a performance from an actual KFC Choir.

Possibly the scariest ad you’ll see. And it comes with a health warning and disclaimer. Japanese tyre company Autoway Tires has come up with a novel way of getting viewers to stand up and pay attention to their services – by making them jump out of their skins. The Fukuoka-based company aimed to show how their tyres would perform in ‘unexpected’ conditions.

You might like: 6 smart ads that transform boring billboards into fun installations | The Christmas ads which want your tears | The app which aims to reunite dog and owner

Wrong. Jean-Claude Van Damme really did perform his famous split stunt in epic proportions between two reversing Volvo Trucks. The live test from Stockholm agency, Forsman & Bordenfors, was set up to demonstrate the precision and directional stability of Volvo Dynamic Steering. The viral ad, set to the dulcet tones of Enya, was filmed in Spain on a closed-off landing field at sunrise in one take and has already gained cult status.

This ad for Universal Pictures, created by Brazilian variety show Programa Silvio Santos and in-house, shows a knife-wielding 'Chucky' crashing through the glass of a bus stop where unsuspecting members of the public are waiting. It’s guaranteed to get a chuckle (no pun intended) out of you, but we’re not sure that would be the case if you were on the receiving end of this ‘prankvert’.

Kmart’s racy “Show Your Joe” ad for the Joe Boxer brand of underwear features six men in tuxedos (just the top half, mind) playing ‘Jingle Bells’ - Chippendales style. The 55-second ad from DraftFCB Chicago has resulted in a flurry of criticism on Kmart's Facebook page, but others might see the funnier side of it.