BENETTON'S UNEMPLOYEE OF THE YEAR

The Chairman of Benetton, Alessandro Benetton, spoke during the launch of the company's new advertising campaign in a store in London, intended to highlight the plight of young people striving to find work.

“Unemployee of the Year” by 72andSunny, Amsterdam and Italian agency Fabrica, Treviso, will be made up of print ads, a video and an online contest running until 14 October 2012.

The ads feature seven attractive and well-dressed youngsters like Valentina, a non-lawyer from Italy, and James, a non-sound engineer from the UK, who are real people without jobs. It's to make the point, says Benetton, that most of today's unemployed are talented youngsters desperate for work and not lazy good-for-nothings.

The campaign, which has been set up under the aegis of the Unhate Foundation, seeks to “challenge clichés about youth non-employment and asserts a belief in the creativity of the world’s youth. Through it, the Unhate Foundation, whose aim is to promote a culture of non-hate, will support youth to become actors of change against indifference and stigma.” It is estimated that youth unemployment is at 100 million globally.

In comparison to their previous campaigns, which have been known to be provocative and unpredictable, “Unemployee of the Year” is relatively tame, but with an Occupy Wall Street feel about it.

No one can forget the controversial work of Olivero Toscani, particularly from the early 90s, or the 2011 “Unhate” poster campaign with images of world leaders kissing each other, including Pope Benedict XVI in embrace with and kissing the lips of Ahmed el Tayyeb, the imam of the Al-Azhar Mosque in Cairo. (This particular print ad had to be withdrawn from the campaign after the Vatican threatened legal action). The campaign took the Press Grand Prix at Cannes 2012.

"People are already complaining to me that the campaign isn't provocative enough,” Alessandro Benetton told UK newspaper, the Independent.

“In many ways the issue of youth unemployment is even more shocking than the kissing one because of the implications of a wasted generation without work. We wanted to do something different to the kissing campaign, one with a modern twist: Benetton 2.0." 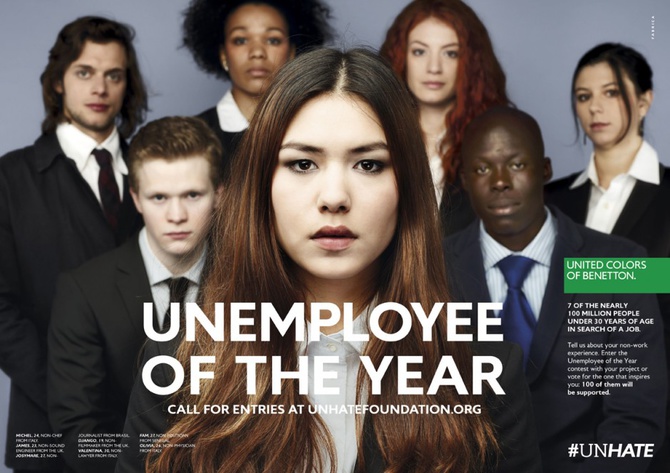 Benetton "Unemployee of the Year"

Benetton "Unemployee of the Year" by 72andSunny, Amsterdam/Fabrica, Treviso, Italy. The film aims to give "an unfiltered portrayal of the everyday life of four young NEETs (Not in Education, Employment or Training). We see how they fight to find a job while at the same time fighting for their dignity, against indifference and stigma." 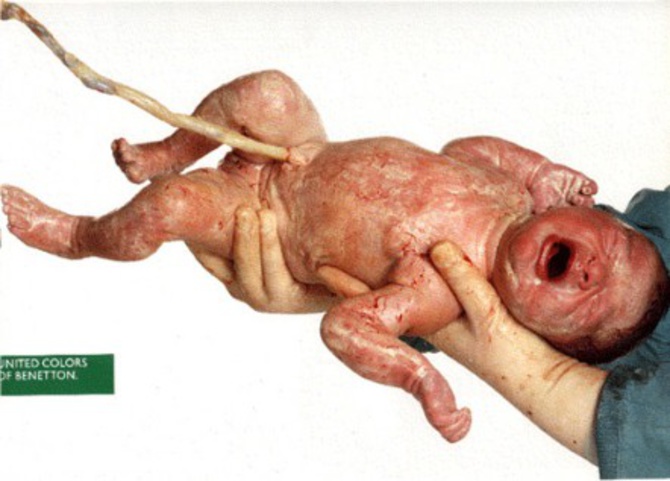 Image: This print ad by Olivero Toscani appeared in Archive Vol. 4/1991. The image of a new born baby girl was intended as an "anthem to life" but ended up being one of the store's most censured images. 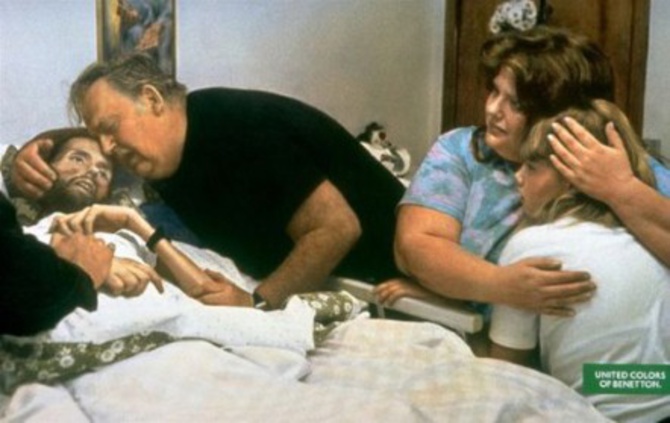 Image: This photo of David Kirby a 32-year-old man dying of AIDS in the Ohio State University Hospital in May 1990 won the 1991 World Press Photo Award, but it was Benetton's use of it in its advertising that brought it to the attention of the world media and made people talk about dying of AIDS.