See the moving story of a paralympian unfold in this stunning commercial filmed in one continuous shot and without the use of CGI. The spot is part of a campaign by BBDO for the Canadian Paralympic Committee.

In this breathtaking commercial we see a paralympic athlete sprinting on a track passing vignettes that depict the story of a runner’s traumatic injury in a car accident and its aftermath.

At the beginning, we see him dodging wheelchairs on a track. We follow him through a rehabilitation room and hospital ward manned with medical teams, then past emergency crews, ambulances and frantic scenes of the wreckage itself. Without the use of any dialogue, his story emerges in reverse, as he is moving forward. The spot shows that despite this, he doesn’t let any of it stop him.

Dubbed “Unstoppable”, the commercial from BBDO, Toronto stars Canadian paralympian Alister McQueen and was filmed in one continuous shot without the use of CGI.

"It's not my story," McQueen explains in the making-of video. "It's more of a general [story] of how a lot of the amputees lost their legs."

The accompanying print ad also visualises the story from accident to unstoppable athlete.

“The idea of the TV spot and the campaign was to show these athletes are what they overcome and then what they leave behind,” says writer, Michael Clowater of BBDO Toronto.

For the 60-second spot, BBDO worked alongside Canadian production agency, Sons and Daughters.

“As soon as we got the scripts we were very excited by the idea the agency brought to the table,” says director, Mark Zibert of Sons and Daughters. “We just thought: how can we execute this in the most spectacular way possible?”

The creative team visualised and perfected the whole commercial in 3D animation before going on set to film the final execution, where they had only two hours to shoot the spot before a heavy storm was due to set in.

“What’s exciting and sort of challenging about it is the scale and the scope of the scene we’ve created, says Zibert. “Everything from the basics of Alister training on a track at night, then leading right up to the big ending where we have him run through the accident scene.”

This is not the first time BBDO, Toronto has teamed up with the Canadian Paralympics Committee. With the help of the agency, the committee launched its first ever advertising campaign in 2010 to promote the Vancouver 2010 Paralympic Winter Games.

“We hope this inspires people who may have a disability and don’t even know that there are opportunities for them to be involved in para-sports or in paralympic sports, so we hope that this will have far reaching consequences where people with a disability become really active in sport,” says Shiela Roy of the Canadian Paralympic Committee. 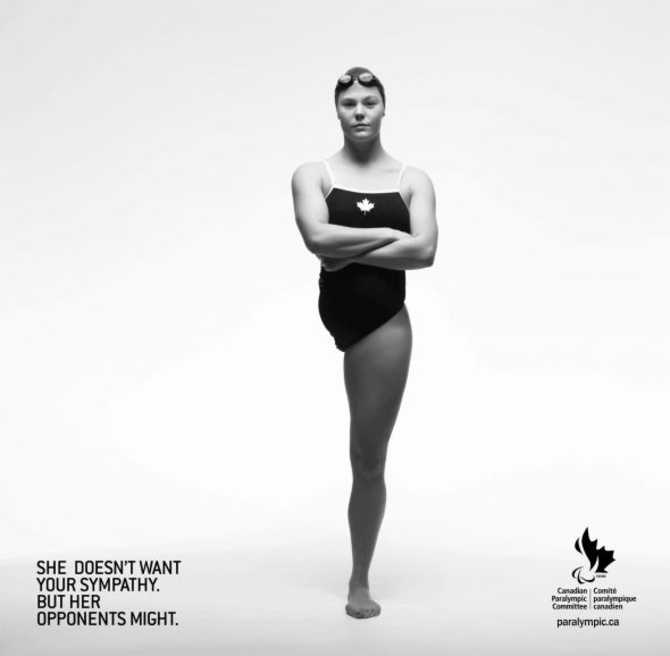 Image: Ad by BBDO, Toronto from the Canadian Paralympics Committee 2010 campaign to promote the Winter Games.

Video: See creative teams from BBDO and Sons and Daughters at work for "Unstoppable".