Adults come face to face with infant versions of themselves. The Evian babies are back... 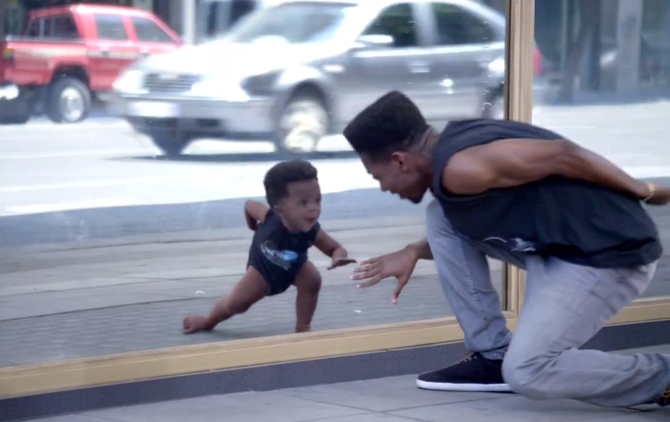 In 2008, a troupe of babies, with the help of some nifty CGI and a revived “Rappers Delight”, took the internet by storm. Evian’s “Roller Babies” viral by BETC Paris neared towards 250 million views and still holds the Guinness World Record for most viewed online film of all time.

The Havas Worldwide (formerly Euro RSCG) agency has brought the campaign back again featuring the “Live Young” strapline. A teaser video followed by a “Baby & Me” spot by We Are From LA and production house Iconoclast kicks of the campaign, featuring a man who comes face to face with his child-self in a bus mirror.

This time Evian has commissioned a Yuksek remix of Ini Kamoze’s “Here Comes the Hotstepper” as the sound to which he, eventually joined by more adults, dance in front of a mirrored shop window after discovering their reflections are baby versions of themselves.

Whether you think the idea is tired or not, you have to give kudos to the person who casted the models for the print ads. In total, 400 babies were cast for the campaign as a result of the hunt for babies and adults that looked alike. The new video has already racked up 30 million views.

BETC Digital has also teamed up with B-Reel to develop a free app which lets you create a baby-faced version of yourself. According to the agency the app will utilise advanced facial recognition software and will be available mid-May.

Through a partnership with photo booth operator Photomaton, the interactive experience will also be made available in branded "Baby Booths" in Paris.

Evian’s “Live Young” concept has included “Water Babies”, which featured babies performing an Esther Williams-inspired aquatic ballet and made the pages of Lürzer’s Archive back in 1999.