From the people that brought you the moonwalking Shetland Pony, Three returns with another campaign to show that “Silly Stuff Matters” to them. 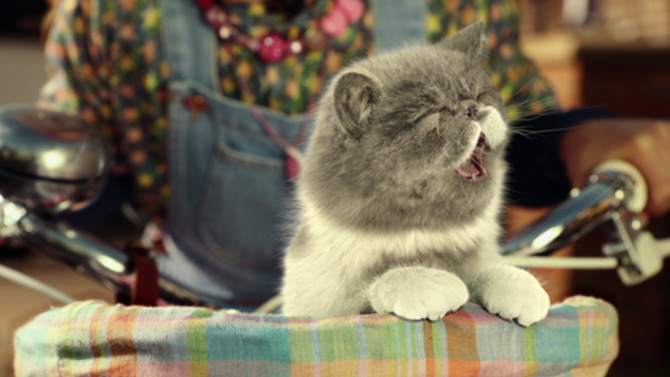 Wieden + Kennedy are trying to do the viral thing for mobile network Three again - and they could be on to something. Their “Sing it Kitty” instalment features a little girl miming to Starship's eighties power anthem 'We Built This City' as she tears up a cul-de-sac on her pink bike with a CGI kitten in her basket.

The 60 second 'catvertisement' was directed by Traktor through Partizan, but it's the little girl's brilliant miming which steals the show.

“Following on from The Pony was a daunting challenge, but we’ve enjoyed the ride - every whisker-twitching, pedal-pumping, sprinkler-drenching minute of it,” say W+K creatives Chris Lapham and Aaron McGurk. You can also create your own 80s inspired content via an innovative web-based app hosted on the Sing it Kitty website and created by Stinkdigital, allowing you to star in your very own version of the ad. The app uses face-morphing technology so fans of the ad can be seen singing along to the music. The campaign is encouraging fans to share the results on social media using the #SingItKitty hashtag.

Tom Malleschitz, marketing director at Three, commented: “Last year we were blown away with the runaway success of our moonwalking pony, Socks. As the network built for the internet we understand people’s behaviour online and know that cute, silly, or unexpected images and videos are what make people tick.”

Update - 17 March 2014. Behind the scenes with MPC London who was behind the CGI and VFX:

A real cat, Bronte, was cast from a litter of rare flat-faced kittens, selected based on his colouring and relaxed personality. MPC’s 3D team elected to cast the cat ahead of developing a digital double of Bronte for the final spot, in order to have the perfect reference for his movement and look.

“We collaborated closely with Traktor and W+K on developing Bronte’s personality to bring him to life," MPC’s VFX Supervisor Bill McNamara explains.

"Working on his movement and attitude, we help his confidence grow from a shy little kitten to a full-blown performer belting out the lyrics. His eyes were key to his charisma and our animators developed the expressions to get some real emotion in his performance.”

The first step for the 3D team was to develop a detailed model of Bronte using 3D software. A rig was then put in place, setting up the bone structure and muscle systems. As the real Bronte has fur with substantial depth, the team studied the hairless Sphynx breed joints, as their shoulder blades and wrists can be easily seen. Luckily Bronte enjoyed a regular bath, as his anatomy was much easier to study when wet.

During the shoot, the VFX team were on hand to capture lighting conditions and measurements to be replicated later in the studio. A 3D model of the entire environment was re-created, to ensure all the conditions of the shoot were replicated before Bronte was composited into the shots.

MPC used propriety software tool, Furtility, to develop Bronte’s fur, perfectly capturing the dynamics and depth of the real cat. The animation stage saw MPC working with W+K London and Traktor to film an actor singing lyrics, and the mouth movements were then applied to Bronte. A team of animators also used reference of cats yawning and snarling to develop the perfect singing feline.