THE BALLERINA STUNT FOR VOLVO TRUCKS

It's never been done before, not even in Hollywood. But that didn't stop Faith Dickey, a world record holder in highlining, from trying to do what everyone thought was impossible: walking a rope between two moving trucks. 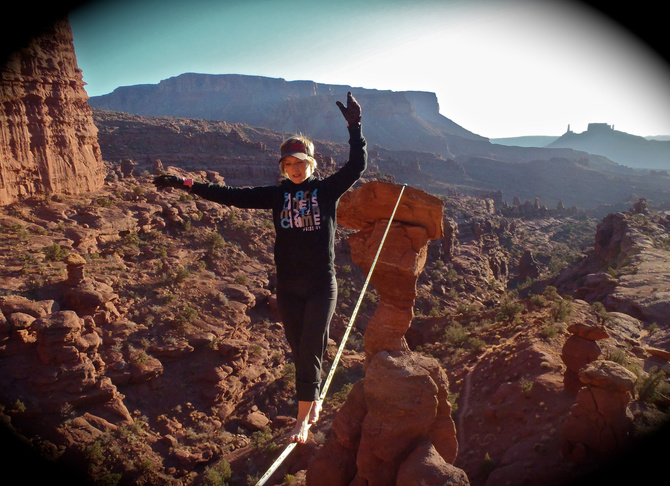 The “Ballerina Stunt” ad is Forsman & Bodenfors' first commercial for Volvo Trucks, with the Swedish agency teaming up with Smuggler to create the adrenaline inducing ad, which is very different from the conventional spot.

"You need to have a totally different mindset and have be be part of popular culture instead of trying to do a traditional 30 second commercial," say copywriters Björn Engström and Martin Ringqvist.

“We wanted to do this for real, and so did the director. He’s not the kind of person that compromises on anything, so he got in touch with the very best Hollywood stunt people. At first, they didn't think it was possible. But in the end they solved all problems, with full safety. The team practised a lot, even in wind tunnels, before we went on location. But if it wasn't for world record holding slackliner Faith Dickey (and the Volvo FH trucks of course), it wouldn’t have been possible. Faith is truly amazing.”

The death-defying stunt was directed by Henry Alex Rubin, who was Oscar nominated for his film Murderball, and set up as part of an upcoming campaign (Forsman & Bodenfors couldn’t give us any more details) to show the “precise handling” of the new Volvo FH truck – in a spectacular way. The ad was shot on a closed highway in the mountains near Vrgorac, a village in Croatia.

“My favourite kind of film is one that someone tells me is impossible to make,” says Henry.

“When I hear that it makes me want to move mountains. Faith Dickey is the same way. Tell her ‘no’ and it will fuel her.”

The crew worked alongside stunt coordinator, Peter Pedrero who has has worked with Hollywood films such as Harry Potter, James Bond and Pirates of the Caribbean. Crashing boats and flipping over inside burning cars is part of his job description.

In the video we see Faith Dickey walk across a zipwire stretched between two Volvo trucks heading toward a tunnel at speed. It joins a list of heart-pumping stunts that have gone viral (just check out our feature on the Gymkhana rally driving series) and has at the time of writing tallied up 3.2 million YouTube hits since it went live on 15 August.

Slacklining is a rapidly growing sport that involves walking across nylon lines tensioned between rock peaks and mountain outcroppings. The Faith Dickey holds the Women’s World Record in two disciplines: highlining and longlining. She’s walked the line 1,200 meters above the ground.

“No one has ever done this before – and I understand why," says Faith. We practised and practised and I kept falling. But finally I did it. I walked the line.”