The new Citroen makes you feel like a baby riding a horse – according to its latest spot. 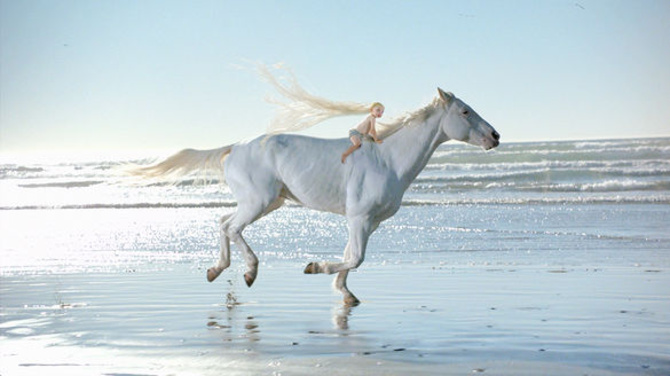 From the man who brought you the Emmy-winning Old Spice "The Man Your Man Could Smell Like" and “Muscle Music” spots, Skittles “Touch” and the bizarre DirecTV ads – director Tom Kuntz is by now well-known for his eccentric spots.

He had a couple of spots during this year’s Super Bowl including Oreo’s “Whisper Fight” and Volkswagen’s “Get In. Get Happy.” Now he’s sharing the bizarre in Europe with a spot for Citroen.

The new dream-like ad for the French manufacturer’s DS3 Cabrio features a baby with long, golden locks riding a white horse on a tranquil and pristine beach.

Created by H Paris, the spot’s baby gallops along in slow motion to Spandeau Ballet’s “True” from 1983. The equestrian themed daydream is briefly interrupted by a red light where we see a man (who bears a surprisingly remarkable likeness to the baby) in his Citroen.

Kuntz’s 2013 Super Bowl spot was controversial and received some criticism. It featured a white Minnesota office worker speaking in a “happy” Jamaican accent.

Last year we featured his Old Spice “Muscle Music” spot which featured an infinitely loud Terry Crews in nothing but a small pair of red shorts, sat with musical instruments in a room. Crews is covered in EKG sensor pads which are rigged to instruments including a drum kit, electric keyboard, bucket and a saxophone thatexpels flames when played. When he flexes his muscles, you get “music”.

The real prize, however, was once the solo jam spot ended. The video player becomes interactive and allows the user to have their own go at manning the orchestra using their keyboard device, with the option to even record the masterpiece filled with hats, sausages, animal noises and Crews reminding everyone about the digital spin of the spot with a “we on the internet!” sound bite.

If you missed it, you can have a go here.

Video: Volkswagen "Get In. Get Happy" by Deutsch, LA. Directed by Tom Kuntz.