Do you need advice on your love, family and work problems? Look no further as Ogilvy, Johannesburg’s Javas Njongo is at hand to share his “wisdom” with you.

“Javas Nkongo was a name spoken with great reverence in all the land,” begins the 60-second spot for African digital satellite television service, DStv. “You see, Javas was the youngest wise man ever in the kingdom and he did not even have grey hair…”

Ogilvy, Johannesburg explains the new character: “The story goes that many years ago, Javas Njongo was shipwrecked on a remote island. “At first I was afraid, I was petrified. But over time I found my calling. The people on the island felt lost. They needed someone to take their hand and show them the way. They needed a wise man. They needed me.” (Or so he told us via satellite phone.) 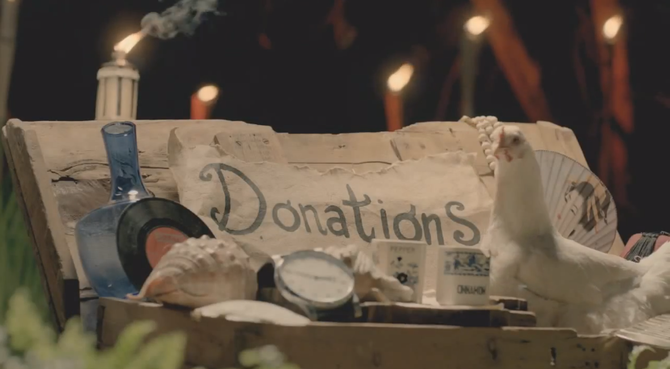 “Hailed as a wise man who has the answer to every possible everyday problem – from unrequited love to neighbour woes – Javas graciously invites these troubled souls to sip from the fountain of his wisdom.”

However, the words imparted by know-it-all might start to ring a bell as you eventually clock on that he is quoting inspiring lines in popular culture from the likes of Snoop Dogg, Dirty Harry, the Commodores and Marvin Gaye.

He tells one man seeking advice in the love department: “You must say to her: you’re once, twice, three times a lady. And I love you.” Around the fictional kingdom’s banquet, he tells diners that he gets his wisdom from dreams, the wind “and once, I heard it through the grapevine.”

His secret: he has learned all these lines and insights from the movies, songs and documentaries that he watches on his secret television hidden in his home.

The integrated campaign ties in with DStv’s rebranding launch which aims to show that “watching television shows like those on DStv can in fact open up your world, and expand and enrich your knowledge base, through access to common wisdom found in popular culture”.

The campaign extends to social media platforms Facebook and Twitter where Javas Njongo’s interactive hotline gives ‘advice’ to users who seek it. One of his latest tweets tells followers: “Don’t let the embarrassing thing you did this weekend torment you. Oh yes, the past can hurt but you can either run from it or learn from it” – a familiar line from a certain baboon from a certain Disney film about a lion.

You can also visit the Ask Javas website for help with those unanswered life questions.