EXPECT THE UNEXPECTED WITH DBS BANK

Bizarre installations aim to prepare drivers for the unexpected in Singaporean campaign from DDB Tribal. 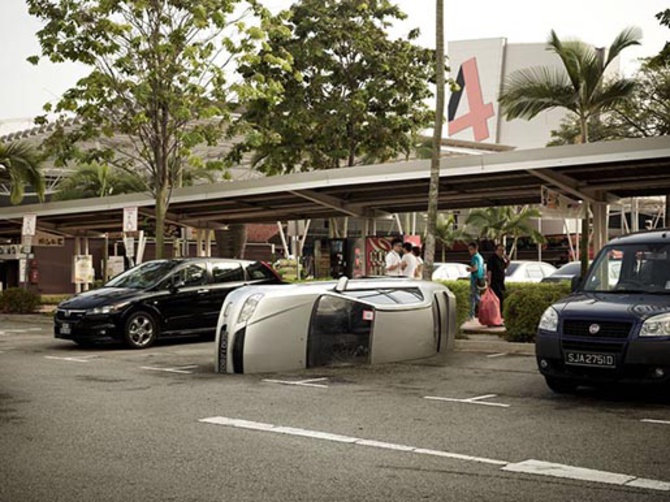 The campaign features a series of three bizarre car installations that depict the most unimaginable that could happen to a car. These include a magnetised car, a frozen car and a halved car, each with a QR code aimed at curious onlookers to scan and reveal footage of how they came to be, captured from a camera in the inside of the cars.

Filmed from the perspective of an in-car camera, this is a series of tongue-in-cheek videos of unexpected events. The videos aim to drive home a safety message, that with a DBS Bank in-car camera you can “expect to see the unexpected”.

The “Expect The Unexpected” campaign was developed at Tribal DDB Singapore who also launched an awareness campaign for the product in January 2012 by taking to the road – literally -  in the form of live skits performed at traffic junctions in Singapore, to better prepare drivers for unexpected vehicular situations.

The short performances, showcased before curious passers-by, took place at pedestrian crossings, much to the amusement of unsuspecting drivers.

The skits were filmed and uploaded on YouTube for public viewing and sharing and cover four key scenarios – floods, collisions, road rage and car theft; aiming to advertise the importance of DriveShield should these unexpected events occur. The four videos were released separately over a period of a month.

At the time, Francis Ooi, creative director at Tribal DDB Singapore, said, “Rather than take the conventional route of holding road shows to attract consumers, we decided to add a twist by bringing them to the drivers.”