The celebration of the most iconic time travel film franchise is nearly upon us. Is the future about to become reality? 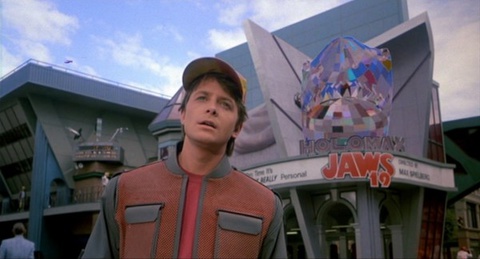 Unless you’ve been trapped in time you will know that tomorrow is Back to the Future Day: 21 October 2015 – the date Doc and Marty travel to using a DeLorean (which Doc has rigged to be powered by fuel cell technology) in the 1989 film Back to the Future Part II. Marty arrives faced with all sorts of wonders and futuristic oddities, which are far from true in the real 2015. That doesn’t mean that brands aren’t going to try and make some of it happen.

The film has a huge fanbase, so the internet is likely to celebrate in its own way (will there be a Google Doodle?). But the landmark day which many have been counting down to definitely won’t be slim pickings for marketers because some of the best parts in the film involve futuristic, non-existent products from the likes of Nike, AT&T, Mattel and Pepsi. 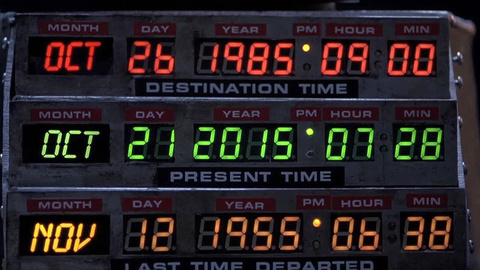 Toyota has made one of the first jumps with a couple of teaser spots, one of which stars Christopher Lloyd and Michael J Fox reprising their icon roles. The ad promotes its new hydrogen fuel cell car – a variation of the technology that the film predicted – the Mirai model. Part of the "Fueled by Everything" campaign from Droga5, the full five-minute version of the spot will be available on 21 October.

Toyota says its 20-year development of the technology and the timing of its launch is a wonderful coincidence - and Droga5 just couldn’t pass up the opportunity to harness the BTTF fun. The Mirai has actually already launched in Japan. Toyota’s US launch will only roll out around 1,000 Mirai vehicles in California and then introduce the model to the Northeast and other regions as hydrogen fuelling stations are created.

“Pepsi Perfect” will also get real with a limited edition release of the soft drink made famous in BTTF Part II when Marty enters an 80s-themed diner and is faced with talking heads and an overwhelming menu. In frustration he says, "All I want is a Pepsi" and what he gets is a Pepsi Perfect in an unusually shaped bottle with a blue lip.

A limited number of 6,500 bottles in collectible cases will be sold online for around $20, meaning you can't just pop into your local diner that plays Michael Jackson’s “Beat It” and order one from an AI version of Ronald Reagan. Two hundred early-bird bottles have already been given to fans, who came dressed to New York Comic Con as Marty McFly. 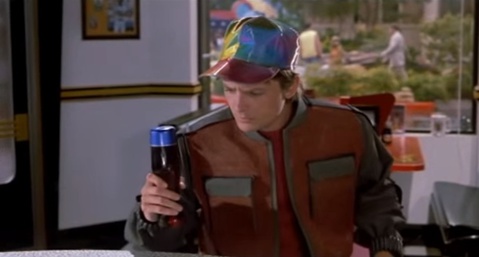 In rather less a prediction and more life imitating art, this month could also see the re-release of Nike Air MAG sneakers – this time with the crucial power laces. Back in 2011 Nike had fans excited after showing a teaser video for the Air MAGs featured in BTTF Part II.  They were packed with a glowing LED panel and an electroluminescent Nike logo and an internal battery. 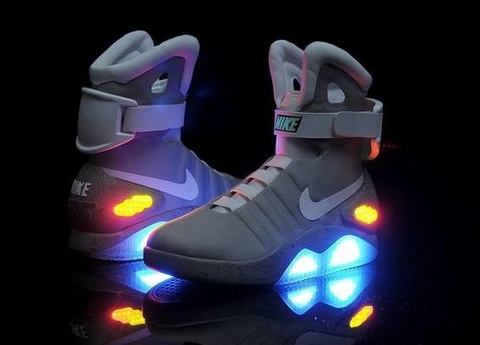 Nike's first rechargeable shoes didn’t actually lace themselves as they did in the film, but 1,500 pairs were auctioned off with proceeds going to the Michael J Fox Foundation, which benefits Parkinson’s research. Earlier this year a Nike's innovation chief Tinker Hatfield confirmed that the company was working on getting the power laces out to customers in 2015. Could October mean the wait is over?

Universal has also got in on the fun by releasing a spoof teaser trailer for Jaws 19, the movie that was showing at the Holomax Theatre in Hill Valley during BTTF’s 2015.

Meanwhile, Austrian tech researchers Trilite claim to have cracked the problem of creating giant displays that can show images in 3D without the need for glasses. It would mean the 3D billboards seen BTTF’s 2015 could finally become a reality.