Oreo latest campaign is a series in which inventors and technologists develop absurdly mechanical ways of separating Oreo cookies from their creme – these machines and tools that are much more complicated than just using a knife.

"Separator Machine" created by Wieden + Kennedy is part of the “Cookie or Creme" campaign encouraging fans of the sweet treat to declare their favourite Oreo part and take a side.

The first episode, which is four-minutes long, tallied up three million views in the week it was released. The documentary style video, featuring physicist David Neevel and his Arduino powered Separator Machine, is “entirely based on the dislike of creme and preference for cookie”. Expect sparks, aluminium scraps, hatchet blades and a dramatic soundtrack.

“I didn’t get to see my girlfriend or my dog for hours at a time sometimes, and I had to try to find like a good sandwich in this part of the city and stuff. There are a lot of sacrifices, I guess,” says Neevel who developed the contraption in a workspace in Portland, Oregon. 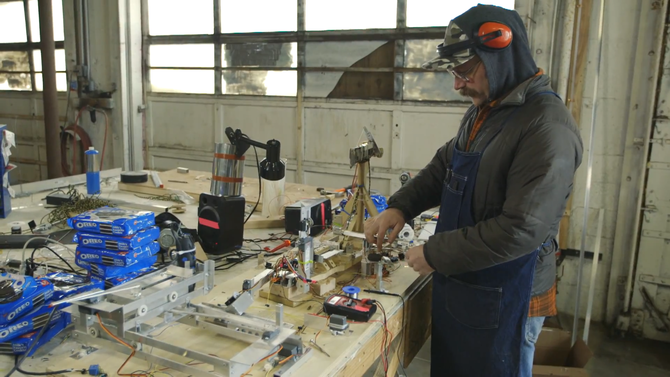 “Over the last hundred years, almost literally billions of productive man-hours have been lost to people splitting apart Oreo cookies by hand and eating the part they prefer,” says the brand.

“In an attempt to make the world a better and more efficient place, Oreo has contracted the world’s best roboticists, artists and tinkerers to create machines that will do the work for us. Take a look at the future of eating Oreo cookies.”

Oreo has even extended the rivalry on its Instagram channel. Users are encouraged to choose a side by tagging their Instagram photos with either #cookiethis or #cremethis, and Oreo just might re-create what’s in your photo with cookie or creme “for the whole world to see”.

So far you can see images of alligators, ancient monuments and armchairs all created using Oreos on the photo sharing platform.