Office workers in a skyscraper gather at a window with their jaws on the floor. But it’s not because the Diet Coke guy outside is having his break. Mother London adds to the “You’re so MoneySuperMarket” campaign.

The success of MoneySupermarket’s “Epic Strut” led to the UK obsessing over ‘Dave’ and his twerking, booty shaking moves (see TV interview below). But now, the hot pants and heels have been put to rest for a while, paving the way for a new man in town in the latest roll out of the “You’re So MoneySuperMarket” campaign.

Mother London introduces Colin, who like others before him, has saved money at MoneySuperMarket “and now he feels EPIC” – as the campaign’s tagline goes.

Working on a typical British high rise construction site in the city, Colin throws his builder’s hat into the wind as he psyches himself up to celebrate the savings he has made.

The early noughties classic “Just A Little Bit” by Liberty X kicks in as the love-handle laden Colin jumps onto a construction pole with ease and starts to show off some serious moves.

A fellow workman drops his hard-hat on the floor in amazement as Colin continues to show off his epic ability. It’s not just the workmen that look on in shock; Colin has also caught the eye of office workers in the skyscraper opposite who all gather at a window in disbelief.

“He may not have the ab definition of Channing Tatum but boy can he move,” say Lisa Turner-Wray and Raine Allen-Miller of Mother London.

For his grand finale, in the spot directed by Noam Murro through Biscuit Filmworks, Colin performs an impressive ‘worm’ before taking to the pole again to break into the splits – a difficult feat for most, especially your everyday builder. Finally a voiceover declares: “Colin, you’re so MoneySuperMarket” before one final shot of Colin paying homage to Miley Cyrus by swinging from his wrecking ball.

“It continues the light-hearted element of previous MoneySuperMarket campaigns whilst continuing our key aim in encouraging the nation’s households to put the power into their hands and save on their everyday bills,” says Miranda Roe, Brand Marketing Director at MoneySuperMarket.

The shoot took place in Vancouver with MPC on post-production. 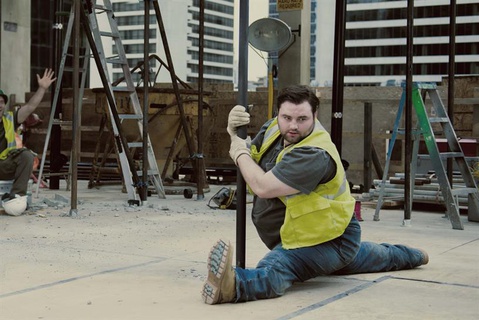