A polar bear wanders the streets of London as part of an outdoor campaign. But does it look a little familiar?

Some parts of the world are feeling the cold in the big freeze, but Londoners didn’t expect polar bears to be roaming around their underground transport system any time soon.

That’s exactly what happened last week when a massive bear was seen in half a dozen places across the city, nosing around in trash cans and sniffing intrigued – some frightened - bystanders. The bear was spotted at locations across the English capital, including Hampstead Heath, Charing Cross Underground and the South Bank.

The animal's wander around the city was in fact a promotion for Sky Atlantic's upcoming crime drama Fortitude, which stars Stanley Tucci and Michael Gambon, and is set in a remote Arctic town. The bear was an incredibly lifelike puppet, operated from the inside by professional puppeteers from the West End show ‘War Horse’.

The semi-animatronic creature was the work of Hollywood special effects company Millennium FX and communications agency Taylor Herring. It took a team of 19 people, 90 square feet of sheet fur and two months to build the eight foot-long creature. 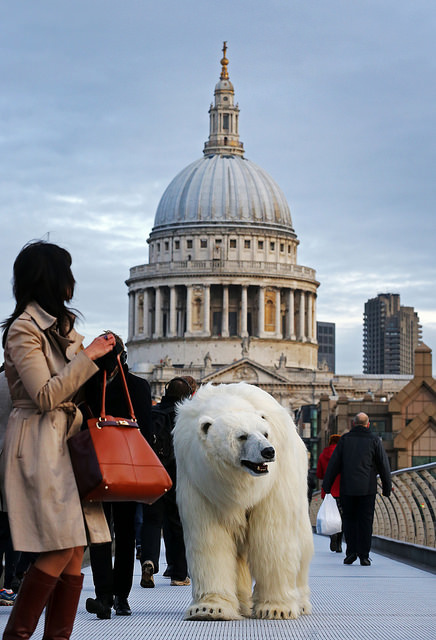 The finish of the head was achieved using a nifty process known as flocking, which involves feeding individual strands of nylon hair into the skull and then using an electrostatic current which causes the hairs to stand up on end. Over the top of the flock longer hairs are individually hand punched into place in directions seen in natural growth.

The highly sophisticated prop uses internal monitors linked to hidden cameras, allowing the two performers inside to see. The puppeteers studied footage of real polar bears before spending five days rehearsing in order to get the gait and other movements right.

But have we seen this bear (or its relative) before? Back in 2012, Partizan London joined forces with Greenpeace to shoot a film – guerrilla style – featuring a realistic polar bear on London’s streets. The film was part of the “Save the Arctic” campaign, aiming to protect the region from oil drilling and industrial development.

Written and directed by Michael Goeghegan, the film told the story of a homeless bear forced out of her Arctic habitat due to climate change set to the sound of Radiohead’s ‘Everything in its Right Place’.

The highly sophisticated prop used internal monitors linked to hidden cameras, allowing the two performers inside to see. The puppeteers studied footage of real polar bears before spending five days rehearsing in order to get the gait and other movements right. 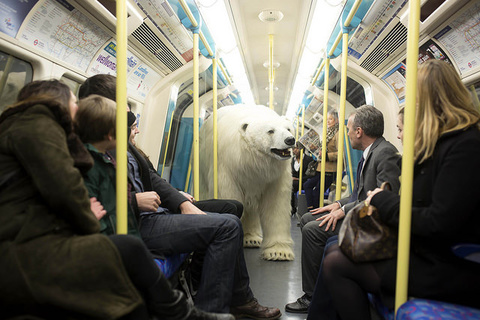