We’ve only just hit December and yet we’re already on our third round-up of Christmas ads. And they’re going to keep rollin’ in! Here’s this week’s pick of the best winter spots... 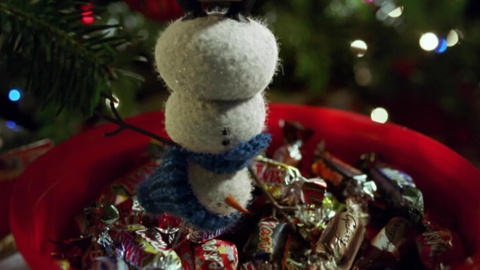 It’s an all too familiar scenario for parents at Christmas; the horror of realising that the noisy gift given to their child by a well-meaning relative is about to become an infinite existence in their lives. In this case it’s a squeaky elephant for little Alfred. The animated spot directed by Kyra & Constantin for the Arla Foods dairy brand features a family of creatures called the Hugglers.

The attention to the mother’s facial expressions really hit the nail on the head.

Next up is this nice bit of animation for Mars confectionery, directed by Dom & Nic. The ornaments on the Christmas tree can’t resist the temptation of the tub of chocolates beneath them, so they devise a cunning team plan to not miss out on their fill.

The scenario resembles something you would see in Disney Pixar’s Toy Story franchise.

The ads in the series were filmed using a Red Dragon 6K camera, which can shoot at 200 frames per second for a subtle slow-motion effect and the effects inspired by Georges Méliès, a pioneering Victorian film-maker.

This one is for Currys PC World, which has enlisted Hollywood star Jeff Goldblum for its first ever dedicated Christmas ad campaign. “Spare the Act” parodies the notion of awkward Christmas moments which stem from gift exchanges that sometimes don’t live up to expectations.

Goldblum hilariously interjects in each of the five videos - like some Mary Poppins-Jerry Springer hybrid - during uncomfortable family moments to offer tips on how to better act out scenarios and avoid hurting the feelings of loved ones. In one spot, the actor walks into the living room of a family as a woman attempts to hide her disappointment in the 1000-piece beans jigsaw puzzle her husband has given her.

The thespian provides an acting demonstration on how to better see out the awkward moment to such an extent that the husband becomes overwhelmed with appreciation and kisses him.

We were wondering why it had taken so long for real cats to make an appearance, but here they are in all their unimpressed glory. To the sound of Elton John's mournful ballad 'Sorry seems to be the hardest word' we see perturbed cats, outfitted in everything from elf costumes to Christmas sweaters, with the suggestion that a sincere apology is in order to make things right.

The humerous spot was produced by Rattling Stick.

Which Christmas spots are doing it for you? Let us know in the comments below.