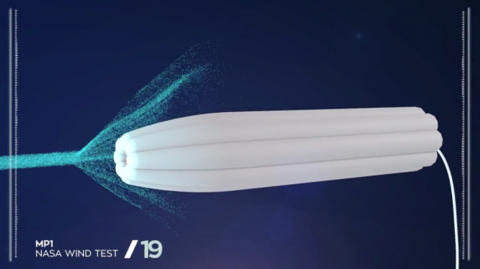 WaterAid wanted to draw attention to the 1.25 billion women worldwide who don't have access to a toilet facilities and sanitation during their period. So the charity made a spoof ad for if men had periods: these men would need Manpax Manpons - super manly Manpons designed by NASA.

These sanitary products are more advanced than your average feminine product, with their Kevlar skeleton and heated therma-core. The “bait-and-switch” appeal is also fairly advanced.

The tongue in cheek Manpax ad, in particular, has proved popular on social channels. The campaign for the charity - who says it’s possible to get taps and toilets to everyone, everywhere by 2030 - seems bizarrely connected at first, but there is a strong message behind them.

“These might have made you smile – but the reality is that, around the world, millions of girls and women lack the clean, safe water and toilets they need to manage their periods, explains WaterAid. “And it’s costing them their health, their education and their dignity.”

The premise behind them questions how different life would be if men had periods. The charity puts forward the argument that if men menstruated, periods wouldn't be awkward or embarrassing – they'd be equated with power and virility:

“Men would boast about theirs around the water cooler, and pat each other on the back for overcoming another gruelling, monthly battle against nature.

“Sportsmen would take their periods seriously – very seriously. No patronising eye-rolls here. Instead, sportsmen and their periods would become nothing short of a science, with trainers getting teammates to live together to coordinate their cycles before a big match and bookies factoring monthly bleeds into their odds on players' performances. You can just imagine it, can't you...

“Sanitary items would be a human right Forget taxing sanitary products as luxury items. They’d be available on the NHS and included in international aid packages alongside food, water and medicine, because 'no man should have to suffer the indignity of being denied proper menstrual hygiene support'.