WEIRD ADS FROM AROUND THE WORLD

From talking food to Japan’s most popular ad family – here is a roundup of ads from around the world... that are a bit on the weird side.

The father is a human in a dog's body, the son is African American and their maid is an incarnation of Tommy Lee Jones. This is “The White Family” – the most popular recurring commercial characters in Japan for telecommunications company, Softbank Mobile.

The family is made up of father “Otosan”, son “Kojiro”, mother “Masako” and daughter “Aya”, who have been on Japanese screens for over 130 spots and have even featured cameos from the likes of Quentin Tarantino, Tommy Lee Jones, Shinji Kagawa and a genuine Japanese astronaut, Satoshi Furukawa, in space.

The ads were created by San Francisco agency Muh-tay-zik | Hoff-fer. 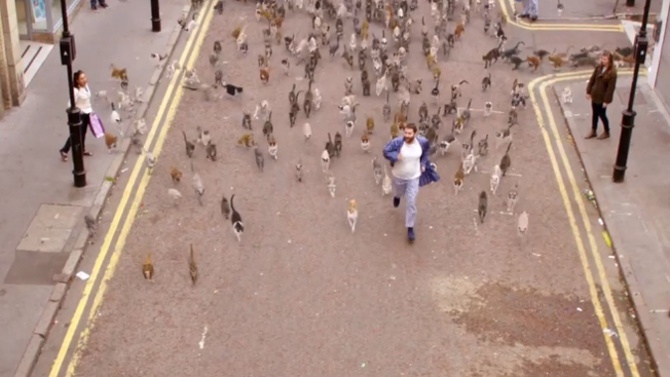 "Bill here just saved £304 on his car insurance at MoneySuperMarket and now feels so good he thinks he can run with wolves,” says the narrator in Mother's new spot for the price comparison site. He earnestly adds: “There are no wolves in Croydon" before we see Bill prance down the street in his pyjamas with an army of kitties - to the sound of "Oh What a Beautiful Morning" from Oklahoma.

Will it stand out among all the feline-themed British ads?

It follows a set of ads from earlier this year featuring a wife who goes on a tirade about having children and a daughter who bursts out crying – all at the hands of “Soy Aftertaste Face”.