StinkDigital created a rich and mind-bending interactive film experience for shooter game, Far Cry 4, which will probably send you trippy. 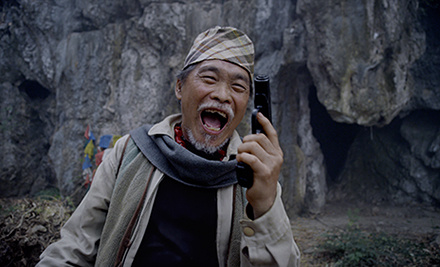 Ubisoft's anticipated Far Cry 4 is a first person shooter game where every decision the user makes changes the course of the game. As part of the launch campaign by Grey Paris, StinkDigital produced an interactive experience that tests the user’s mettle via four thrilling rites of passage.

“Not only does your performance in each rite reveal a bit more about your personality, but it also rewards you with exclusive content from the game itself,” says StinkDigital.

The content was shot by Stink/Stinkdigital over five days in Asia with Nieto directing. The site itself was built entirely in HMTL5, with tailored versions of the experience for mobile and tablet. The iconic “kukri” for the rewards status screen was created entirely in WebGL.

In the "An Eye For An Eye" portion, you find yourself in a first-person fight to the death with a crazed opponent. Your task is to make quick decisions about what weapons you want to use so that you can defeat him and escape his cabin unscathed.

Whatever your choice of weapon, the experience promises perfect continuity between each shot, thereby giving the sensation of a completely seamless battle.

StinkDigital explain the hours that went into editing: “Many hours of editing were required to build the most cinematic and realistic experience possible: smoke, fire, gunshots, bullet impacts, explosions and a large number of invisible effects were added to create the spell of a truly intense showdown.” 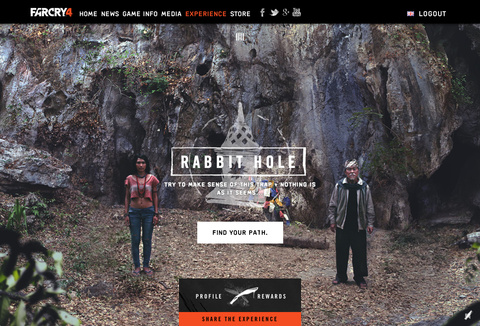 The second portion "Rabbit Hole" finds the user trapped in a seemingly endless maze, and surrounded by enigmatic characters that must be trusted in order to find his way out. Guns, spiders, pills of dubious provenance and even mobile phones all factor into the journey.

Possibly the most mind-bending of them all, the "Mind Blossom" rite finds the user sitting across from a shaman, who offers choices for hallucinogenic ingredients along the path of an increasingly intense trance. For the trance sequences, we played with kaleidoscopic and mirror compositing and chromatic variation to achieve the craziest results possible. The creative team used plenty of analogue synths, fuzz guitars and vintage effects to re-create a realistic psychedelic soundscape. 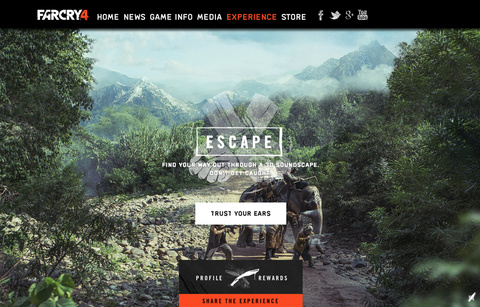 In the final part "Escape", the user is kidnapped and put in the dark with a burlap sack. Through his own breath, he listens for aural clues in the environment around him, knowing the only way to escape for him is to trust his ears.

“We used binaural techniques to create a three-dimensional effect for this sound-based experience,” explains StinkDigtial.

“In addition to fitting a dummy with condenser microphones in the studio, we used software to alter six-channel surround-sound recordings and convert them into convincing 3D soundstages for stereo headphones.”