Tool and Plan8 have created “A World of Belonging” an interactive data visual that displays the scale and story of international lodging website, Airbnb. 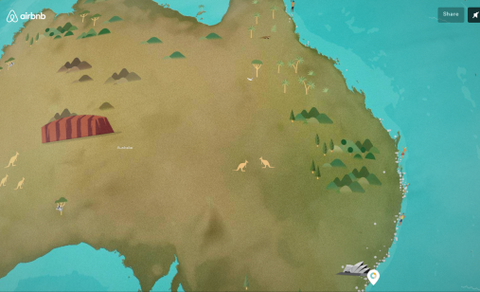 Through a WebGL based globe and interactive illustrative map that is optimised for mobile and desktop, Airbnb is dynamically showcasing just how small and friendly the world can be with “A World of Belonging” - created with Plan8 and Tool.

The map showcases Airbnb activity around the globe, with real-time action illustrated in motion, global hotspots, guest check-ins, and recent milestones including a most recent one this New Year’s Eve. (On December 31, 2014, Airbnb say they “diminished the number of strangers in the world with nearly 550K travellers using Airbnb to stay in over 190 countries. Our biggest night yet!”) 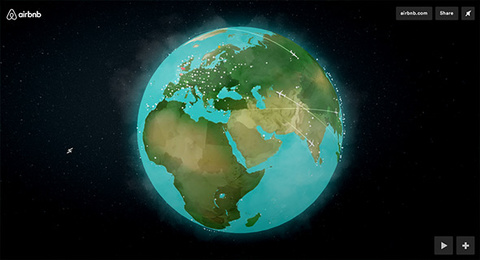 Within the map, users can click to see activity around the #OneLessStranger ‘act of kindness’ campaign and click on the designated icons to see what the brand’s community is doing with the challenge. These kind deeds include the likes of Vicky in Toronto who made sure to kick off a stranger’s 2015 on the right foot with a hangover cure gift pack, to an EMT who made friends with Patty Blank as she delivered chili during a snowy winter day.

“The movement has inspired all types of people, and all kinds of creative acts, and this map is where you can see them playing out, in real-time, as they happen,” says Airbnb.

“The map displays travellers checking in on Airbnb all over the world, along with other interesting activity. Of those 550K guests checking in on New Year’s Eve, 91K were new guests using Airbnb for the first time. We had 22K new hosts opening their home to travellers, adding to our global community of over one million places to stay.

“For contrast, just five years ago, we had roughly 2K people using Airbnb on this night. People celebrated at their Airbnb listing in their own unique ways — we saw ten engagements happen at Airbnb listings in Manhattan alone. And some chose a more unique way of travel, with 133 Airbnb guests choosing to stay in boats around Amsterdam to ring in the New Year. Here in the U.S., guests from New York represented the largest group of visitors to Mexico City for the holiday.” 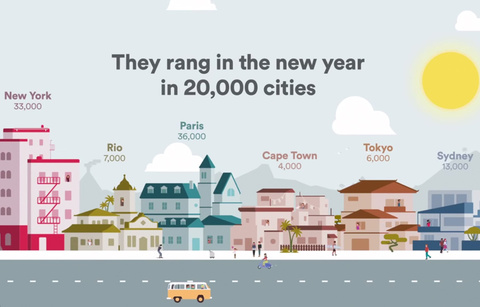 Andrew Schapiro, Head of Airbnb’s Art Department added: “Part of the challenge of building this experience was thinking through how we can marry the scale of Airbnb experiences happening around the globe with the nature of these experiences. The connections people are making are deeply human and personal. So we decided to take a somewhat whimsical and playful approach with the map, bringing life through figures and geographic elements that represent the diversity of the planet.”

Last year we saw Psyop create some lovely animations in a beautiful film for Airbnb, who used a true story to illustrate its brand. “Wall and Chain” was based on the true story of two former Berlin Wall border guards, Jörg and Kai, who were reunited by a chance encounter through the lodging website. “In May 2012 an Airbnb traveller brought her father - a former West German border guard - back home to visit a united Berlin for the first time,” explains Airbnb.

“When they arrived, they were greeted by someone with a remarkable story - a man who served as a border guard in East Germany, just across the Wall from her father over twenty years ago. With the wall between them removed, the two men shared a unique bond, creating the trip of a lifetime.”

The campaign, by VCCP Berlin, also included a “Belong Anywhere” microsite that hosted content about Berlin as well as interviews with those involved.