An unsuspecting cinema audience, expecting to see an advance screening of Paranormal Activity 4, instead got the shock of their lives as two cheeky characters, Gaz & Leccy, came to “life” and caused havoc in London’s West End.

Smart Energy GB’s Gaz & Leccy bring to life the current experience of buying and using gas and electricity in our homes. Like a couple of naughty children, they run around out of control – and can be brought under control with a smart meter. 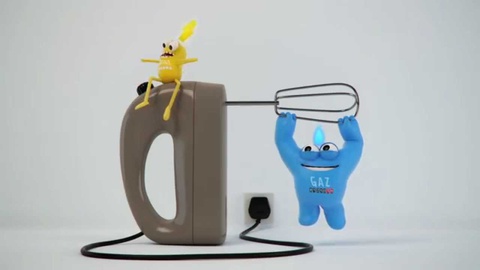 The film, created by AMV BBDO, brings to life the Gaz & Leccy characters who have already been resonating with audiences in the UK via social media, regional radio and outdoor ads. They are designed to engage consumers with the new technology which will be coming to every home, and with the concept of bringing Gaz & Leccy under control with a smart meter.

As part of the production, this was the first time Dolby Atmos sound technology has been used as part of a fully immersive, 4D live experience. The unique sound system allows for pinpointing sounds all around a space.

So in the context of the theatre: up in the roof, along the aisles of the seats, and in the projection room, in a way that conventional cinema sound couldn’t match. The sound was crucial in the stunt to add to the illusion that the fictional cartoon characters were running around the audience, causing havoc.

To add to the theatrics, AMV BBDO brought theatre company Les Enfants Terribles on board to provide the live action ‘cinema staff’ who ducked and dodged and spilled popcorn everywhere due to the staged commotion.

“Smart meters will be installed in every home and microbusiness between now and 2020,” explains the campaign. They bring an end to estimated energy bills and show us in pounds and pence what we’re spending. Smart Energy GB is the national campaign for the smart meter rollout."