Chipotle Mexican Grill is known for its giant foil-wrapped burritos, but the food chain has launched a new game app called “The Scarecrow”. 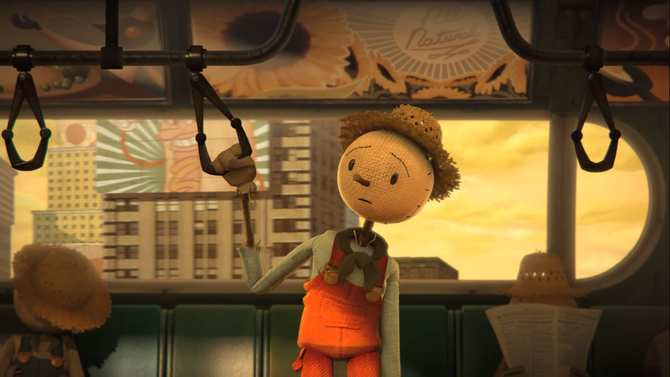 The app accompanies a three-minute animated ad, which is our Spot of the Week (2013/39).

The arcade-style game, created by Louisiana-based Moonbot Studios and LA-based Creative Arts Agency, follows a scarecrow on his quest to save the world he lives in with better food. He works in a factory that makes processed food for the masses.

The game and film is set in a dystopian fantasy world where all food production is controlled by a fictional industrial giant Crow Foods.

“Scarecrows have been displaced from their traditional role of protecting food and are now servants to the crows and their evil plans to dominate the food system,” says Moonbot Studios.

One scarecrow cannot take the way things work in this world. He starts to bring fresh food into the city from his farm home and make burritos for people at a small stand next to the factory.

The spot itself is set to a Fiona Apple cover of "Pure Imagination."

In the game, players will accompany the Scarecrow on his journey through four levels and deliver fresh food to the City of Plenty’s citizens.

Users can tilt their device to navigate through each level, outsmart the Crowbots, unlock extras, and “restore hope for animals, farms, and the environment, while providing the citizens of Plenty a healthy and delicious alternative”.

The levels include the Crow Foods Factory, Scarecrow Farms, Plentyfull Plaza and Downtown Plenty – the latter of which is summed up a city centre “full of animals living in confinement when they should be roaming free in pastures”.

Users are urged to “rescue the confined cows and chickens and return them to the farm while avoiding the misleading Crow Foods propaganda that lurks around every corner.

“Today‘s industrial agriculture practices call for keeping many animals in tiny spaces and feeding them antibiotics to ward off diseases that arise from their inhumane conditions. But it doesn‘t have to be this way. Healthy and happy animals thrive when given room to express their natural tendencies.”

The campaign follows a similar format to Chipotle’s award-winning “Back to the Start” also by Creative Arts Agency, Los Angeles. It told the tale of a farmer who regrets his decision to turn his little farmstead into a profit-driven, industrial machine and goes back on the path of sustainability. It was set to Coldplay’s “The Scientist” covered by Willie Nelson.

Chipotle is offering players an incentive to play with food rewards. If you earn at least three stars out of five in each game world, you receive a reward electronically, to be redeemed at your local Chipotle.

"The Scarecrow" game is available to download free for on iOS from iTunes.

Video: Chipotle (2011) "Back to the Start" by Creative Arts Agency, Los Angeles