Game over in video games translates to organ donors in DM9Sul’s award-winning project. 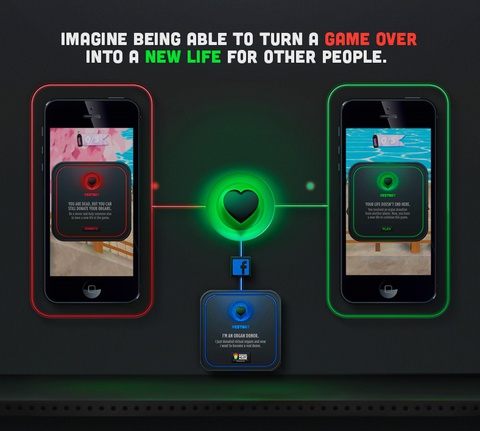 In an attempt to increasing this figure, Grupo ABC’s creative arm DM9Sul developed a campaign for the gaming world which would simulate organ donation. 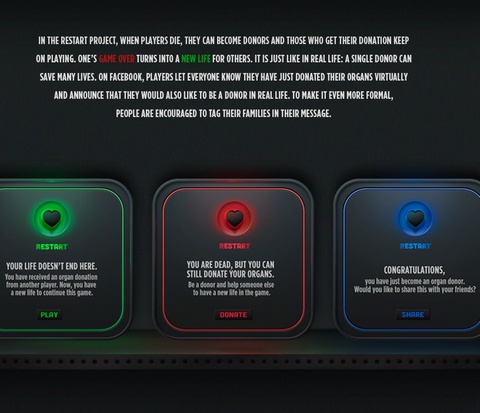 The Restart Project, which gives gaming’s “Game Over” a new life encourages organ donation with a technological platform allowing any gaming developer to embed the organ donation campaign into their game, through a download via the website.

Once installed, the functionality was simple: when a gamer ‘died’, they were shown prompted with a message: “You are dead, but you can still donate your organs. Be a donor and help someone else to have a new life in the game.” As in real life, a single donor can save lives. The project was also synced with Facebook so gamers were able to share it on their social networks.

“The idea was to engage people in a moment that they are sensible to the cause, precisely when they die virtually,” says DM9Sul Communications Vice-President, Marco Aurélio Bezerra. “The ease to communicate the donation through social networking made everything simpler. And it was that simplicity that made our action stronger.”

The Restart Project was developed DM9Sul especially for Porto Alegre Municipal Health Department, city located in the south of Brazil.

“We believe that the unique creative format of the campaign has mobilised young people who, today, have an unprecedented concept-sharing power through social, and other, medias,” says municipal Health Secretary, Carlos Henrique Casartelli, in a statement.

“We cannot consider consolidating the organ donation culture without thinking about the young public, influence on their friends and colleagues, and also their own families.”