In a station in South Korea, you can see a row of brightly lit billboards along the platform with hundreds of pictures of food and drink – everything from vegetables and instant noodles to nappies and washing powder. Could this ‘virtual’ store be the future of shopping? 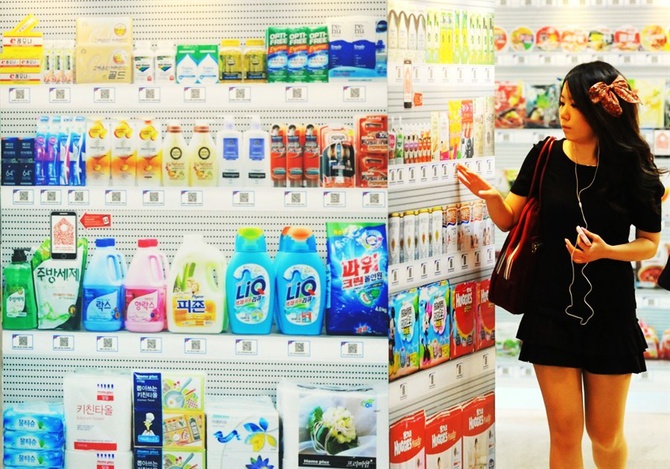 We are increasingly seeing the consumer’s shopping experience being revolutionised. The latest instalment that gives us a snapshot of what could be the future of retail is the new “Homeplus Smart Virtual Store” which opened in Seolleung subway station in Seoul, South Korea in March 2012.

What makes the shopping experience different? There are no actual products. Dubbed as the “fourth generation” retail stores of the future, customers use their smartphones to scan QR (Quick Response) codes via a mobile app and purchase household items and groceries whilst on the go. The products automatically land in your online cart and are delivered to your doorstep after you get home.

This probably looks familiar to you (the QR codes should at least be familiar territory for Lürzer’s Archive readers who can scan QR codes found on our magazine pages to watch TV, cinema and web commercials on their smartphone or tablet).

You will recognise the concept as one of the stars of Cannes 2011. The “Homeplus Subway Virtual Store” won South Korea its first ever Grand Prix in the media category at the festival. With Executive Creative Director Joungrack Lee and Creative Director Youna Chung at the helm, agency, Cheil Worldwide, conceived the idea to get an edge over other supermarkets.

Instead of trying to persuade consumers to visit the store, the outdoor campaign brought the store to busy people by recreating lifelike images of shopping aisles in subway stations, merchandised in the same way as in an actual supermarket. User engagement reached just over 10,000 people, but online sales increased by a tremendous 130 per cent (November 2010 - January 2011).

At the beginnings of the campaign, Homeplus CEO Lee Seung-han said they chose Seollung station for its trial store because over 200,000 commuters use it every day. As well as this, the number of smartphone users is expected to accelerate in the latter half of 2012, according to the Korea Communications Commission, and smartphones are usually used at subway and bus stations (In 2011, the Wall Street Journal reported that the number of smartphone subscribers in South Korea had passed ten million, up from just a few hundred thousand in 2009).

Time will only tell as to whether this concept will work in other countries. South Korea is a very unique market where even the most powerful global corporations can fail miserably in the Korean market. In 2006, multinational retailer Wal-Mart and French hypermarket chain Carrefour had to pack their bags and leave.

Homeplus is owned by is South Korea’s second largest discount retail chain and is number one in the online market. 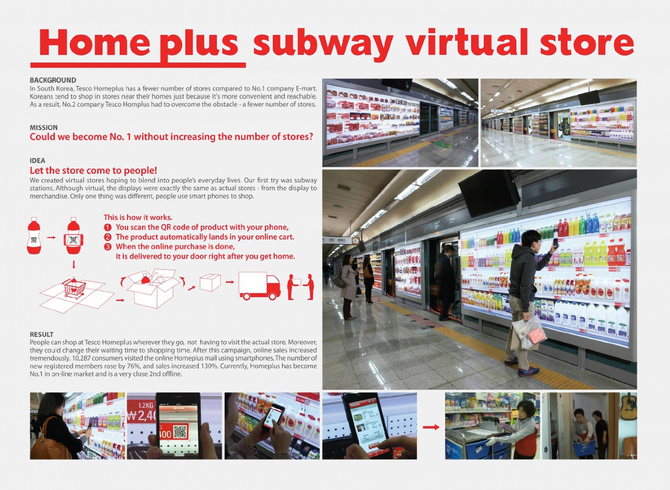 Discuss the pros and cons of this interesting business model on our Facebook page.